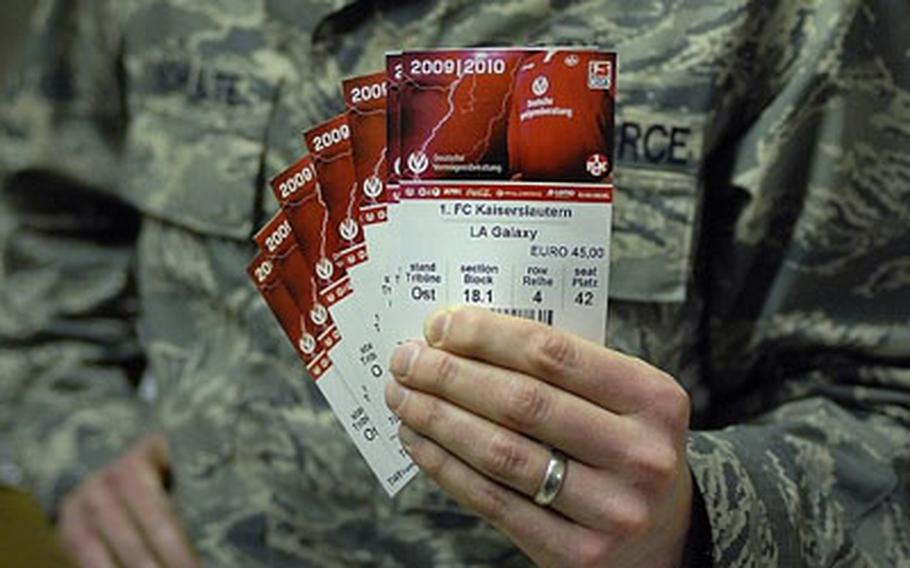 KAISERSLAUTERN, Germany &#8212; Some soccer fans feel like they&#8217;ve been kicked in the shins because they have been unable to get a refund on tickets they bought for a canceled match between the L.A. Galaxy and the local German soccer club.

The match, which was scheduled for Thanksgiving night, was called off just three days earlier because the event&#8217;s promoter, IMC Group of Canada, failed to schedule a second game against a top German team, according to the Web site for Football Club Kaiserslautern, or FCK.

Still stinging from the cancellation, ticket holders &#8212; roughly 8,700 of them &#8212; then found out that getting a refund was not going to be as easy as going to the local ticket office.

An e-mail statement from FCK said that about 500 to 600 people have contacted the club about being reimbursed for the canceled game. However, the IMC Group, which has the money from the ticket sales, is responsible for refunding the money, the club said.

&#8220;Since IMC Group Inc. is the sole organizer and promoter of the game, we are not legally bound to compensate ticket holders,&#8221; Stefan Kunz, chairman of the FCK board of management, wrote on the team&#8217;s Web site.

Officials at IMC Group, based in Toronto, could not be reached for comment. No phone numbers are listed on the company&#8217;s Web site, and e-mail queries went unanswered. Furthermore, an Internet search shows no company listed as IMC Group in Toronto.

The lack of answers isn&#8217;t sitting well some ticket holders.

For retired soldier Ben Schwalbach, the disappointment went beyond the 450 euros (about $645) he shelled out for 10 tickets: His 10-year-old daughter, Emily, was supposed to be among a group of youth soccer players who were to walk on the field with the Galaxy players.

Shirani Tisdale, the wife of a retired Army soldier, said she spent more than $300 on five tickets and planned on bringing her niece, who was visiting from the States. Tisdale professed that she&#8217;s a big soccer fan and has seen FCK play, the U.S. soccer team play Poland and the U.S. play Italy in the World Cup in Kaiserslautern.

Luckily, Tisdale said her credit card company, USAA, indicated that people who bought tickets will be able to get at least some of the money back since they paid for a service that wasn&#8217;t provided.

People who don&#8217;t have USAA Credit Cards should contact their credit card issuer to see if they have the same protections, Kelly said.

And even though FCK says it&#8217;s not legally bound to refund the money, it has devised a way to compensate its loyal fans: People who bought tickets for the match against the L.A. Galaxy can swap their tickets for a future FCK home game, according to the Web site. But the offer is only good for the first five home games of the second half of the season.

For more information, visit the FCK Web site at: www.fck.de/en/home.html.