Fans line up at Okinawa base bookstores to chat with ‘Gunny’ 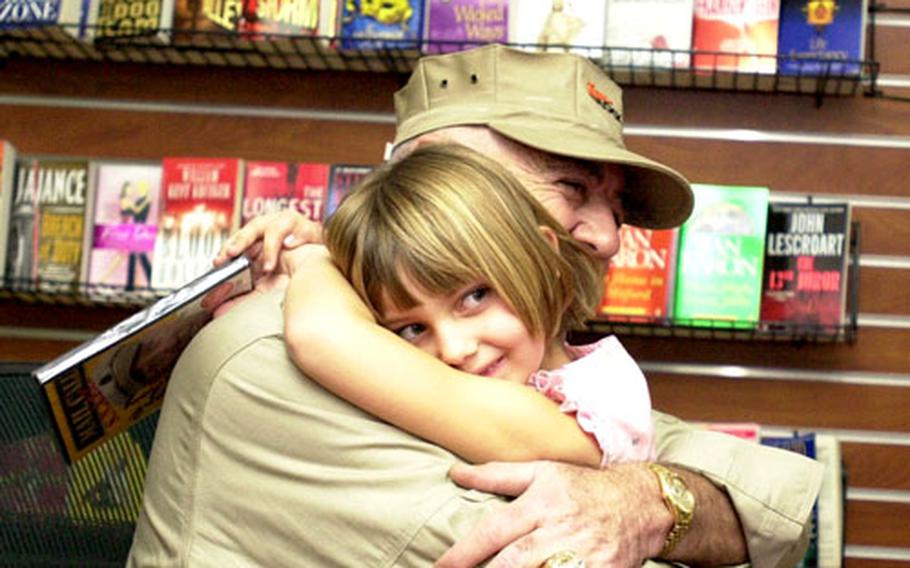 Six-year-old Emma Perry is all smiles as she hugs “the Gunny,” R. Lee Ermey, at the Camp Foster Bookmark in January, 2006. (Fred Zimmerman / S&S)

Six-year-old Emma Perry is all smiles as she hugs “the Gunny,” R. Lee Ermey, at the Camp Foster Bookmark in January, 2006. (Fred Zimmerman / S&S) 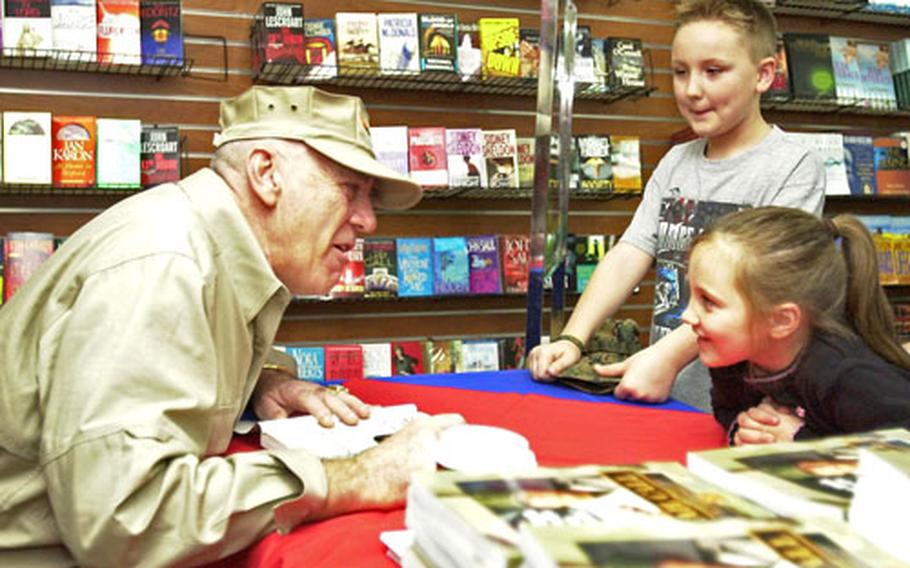 R. Lee Ermey chats with Mackenzie and Dylan Grow as he signs a copy of his book, “Mail Call,” for them at the Camp Foster Bookmark in January, 2006. Ermey held three book signings at Camp Hansen, Kadena Air Base and Camp Foster. (Fred Zimmerman / S&S)

CAMP FOSTER, Okinawa &#8212; Fans of famed former Marine R. Lee Ermey, aka &#8220;the Gunny,&#8221; stood in a long line that snaked through the aisles of the Army and Air Force Exchange Service Bookmark, waiting for hours to get Ermey&#8217;s signature on Sunday.

Ermey held three book signing events on Okinawa over the weekend &#8212; on Camp Hansen, Kadena Air Base and Camp Foster. The Periodical Management Group (PMG), which is a book distributor, and AAFES hosted the signings, according to Suk Han, a PMG manager.

Ermey was there to sign copies of his book &#8220;Mail Call,&#8221; named after his History Channel television show, but he was willing to sign anything fans asked. During the afternoon he signed copies of the show&#8217;s DVDs, copies of &#8220;Full Metal Jacket&#8221; &#8212; the Stanley Kubrick movie in which Ermey memorably played a tough drill instructor &#8212; and he even signed one fan&#8217;s Iraqi money.

Those purchasing the book on Camp Foster were waiting nearly three hours to get Ermey&#8217;s signature, but once they reached the table, Ermey would spend several minutes chatting and then pose for photos. He even played DI upon request, pretending to choke one Marine for a photo.

Han said Ermey stayed at the first book signing on Camp Hansen longer than he was supposed to, and ended up getting to the second signing at Kadena several minutes late. She said he was enjoying himself so much, he didn&#8217;t take any breaks at Camp Hansen, and only one five-minute break in his four hours at Kadena.

One fan was so excited to meet Ermey, she woke up at 6 a.m. in anticipation. Emma Perry, a quiet 6-year-old, said she watches the show as often as possible. Her 8-year-old sister Lilly said Emma yells &#8220;MAIL CALL&#8221; along with the show when it comes on, and she&#8217;ll be telling everyone about her meeting Ermey.

Because Emma is such a big fan, Ermey gave her a DVD of show bloopers, but he warned her that mom would have to help her pick which version to watch because there&#8217;s one with adult language and another that&#8217;s kid-friendly. While Lilly said she doesn&#8217;t really watch the show, Ermey didn&#8217;t want her to feel left out, so he gave her an autographed music CD.

Marine Cpl. Jason Hartwig, a navigator with Marine Aerial Refueler Transport Squadron 152, waited 2&#189; hours to get Ermey&#8217;s autograph. Hartwig had Ermey sign a book and a DVD box of highlights from the first two seasons of &#8220;Mail Call.&#8221;