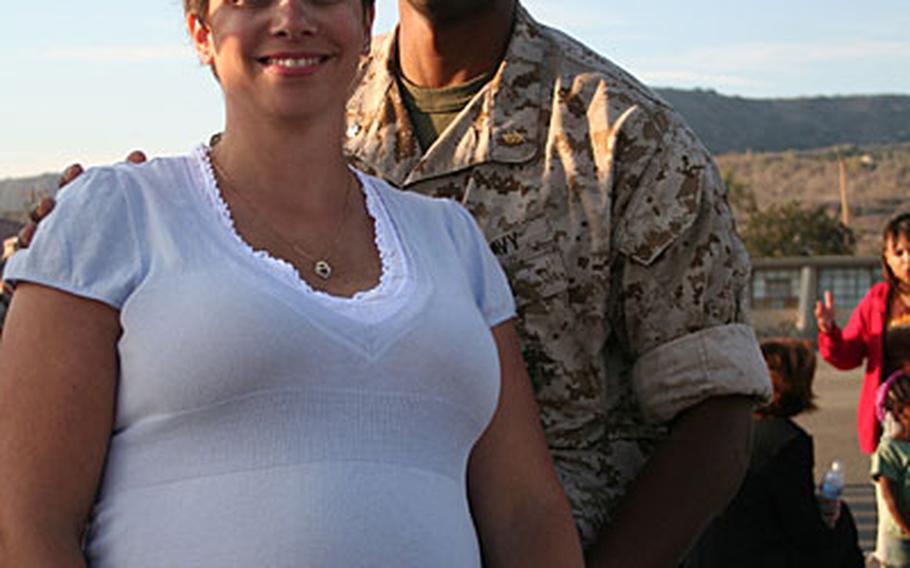 Navy Cdr. Jerry Hamlin and his wife, Tracy, who is pregnant with the couple’s fourth child, had to evacuate their Camp Pendleton family housing unit at 4:30 am Wednesday little more than their children, the dog, and some critical paperwork. (Lisa Burgess / S&S)

MARINE CORPS BASE CAMP PENDLETON, Calif. &#8212; What would you take with you, if you had to leave your home in the middle of the night, knowing you might return to a smoking ruin?

For Navy Cmdr. Jerry Hamlin and his wife, Tracy, the choice was very simple.

They took what Hamlin, a dentist, considers his most valuable possessions: the couple&#8217;s three children.

If he had a chance to do it again, is there anything he would have taken that he forgot this time?

When the call to evacuate the San Onofre housing area came, neither of the Hamlins was asleep.

Earlier in the evening, they had gathered with their neighbors in the cul-de-sac, watching the red glow of the San Luis Rey fire over the hills intensify, and wondering if it was going to come down to an evacuation.

Tracy, due to deliver a baby boy in January, had another reason to be awake. Her 7-year-old daughter had picked up some kind of intestinal bug just that day. The child was vomiting regularly, as her mother held her head over the toilet and tried to comfort her.

Tyler, the Hamlins&#8217; 9-year-old, also was restless. For comfort, he turned to his favorite blanket, the same blanket Tracy had carried when she was a child.

In fact, when the daughter of the area commander came to the door to pass the word about the pending evacuation about 4 a.m., the only person who was sound asleep was the Hamlin&#8217;s 16-year-old son. Not thrilled about getting up, either.

The Hamlins, from Pensacola, Fla., have gone through hurricanes, she said. They are no strangers to evacuations, &#8220;and there was no [SENSE]of panic&#8221; in the house.

Even so, as Tracy walked through her house, trying to decide what to take and what to leave, she began to cry.

She looked at her grandmother&#39;s 100-year-old rocking chair. It would never fit in either vehicle. Would she ever see it again?

The family&#8217;s essential paperwork &#8211; wills, insurance information, passports, the children&#8217;s school records and so forth &#8211; were ready to go. Like many experienced military families, the Hamlins always kept those together.

Tracy took down the framed copies of her husband&#8217;s medical degree and license to practice, and her own nursing degree, which she earned last year.

She took her nursing bag in case someone needed assistance.

The family arrived at the evacuation site about 5 a.m., and Tracy&#8217;s advanced pregnancy caused quite a stir among the Marines there.

After waiting until noon, the family took the children off-base to play.

They returned later that afternoon for an update on the fire.

With the situation still up in the air, the Hamlins decided to check into a local hotel that had agreed to suspend its &#8220;no pets&#8221; policy.

On Friday, they returned to their base house, just in time for Tyler to start vomiting after catching his sister&#8217;s flu.

The house smells of smoke, Tracy said, but everything is intact.