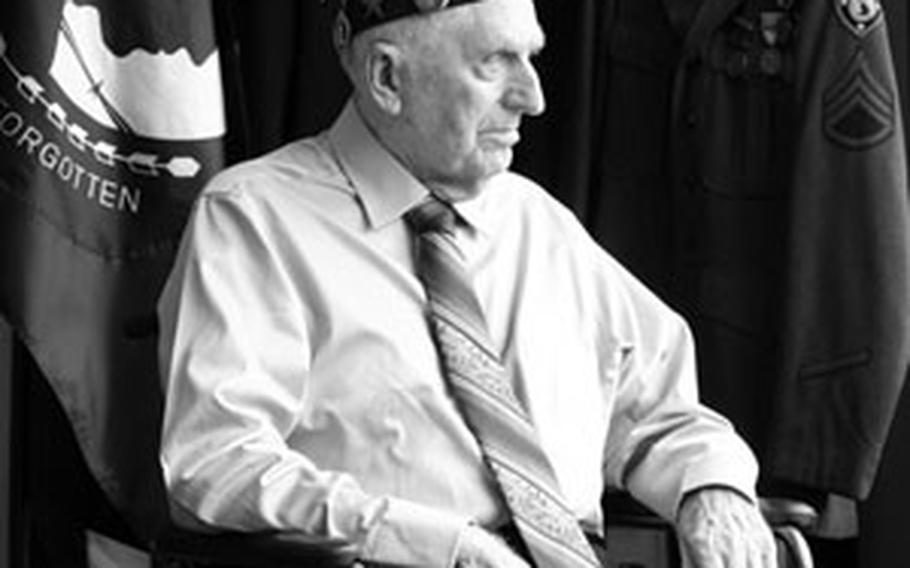 Calling Ralph Holewinski "a tremendous man who encompasses the American spirit," David DeJonge photographed him at a Michigan veterans hospital in 2007. (Courtesy of David DeJonge)

Calling Ralph Holewinski "a tremendous man who encompasses the American spirit," David DeJonge photographed him at a Michigan veterans hospital in 2007. (Courtesy of David DeJonge) April and Chief Petty Officer Eric Holewinski, in their home at Misawa Air Base, Japan, are involved in the quest to have Eric&#39;s grandfather recognized with the Navy Cross medal. (Jennifer H. Svan / S&S) 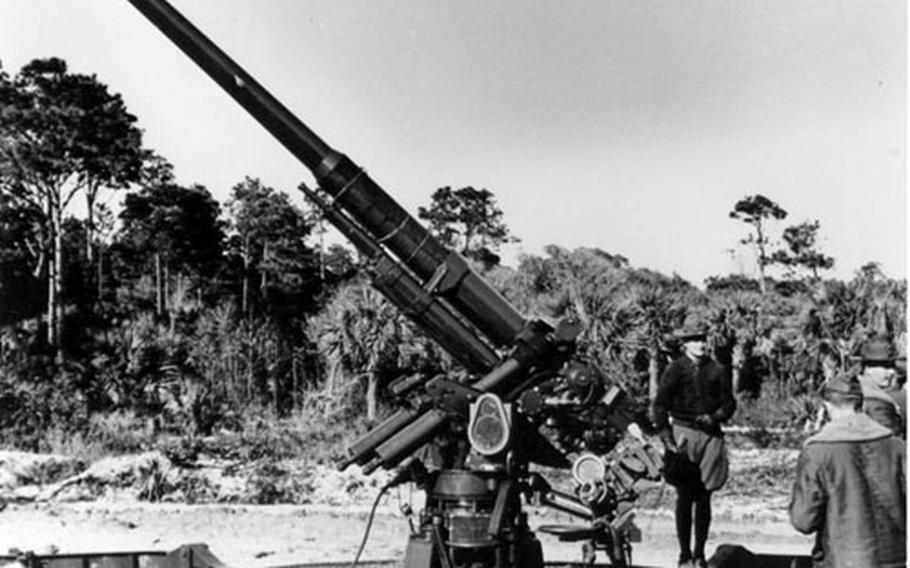 YOKOSUKA NAVAL BASE, Japan &#8212; Sixty years after his honorable discharge from the Marine Corps, Ralph Holewinski still has his military mindset.

The military has reasons for awarding him a Bronze Star instead of the Navy Cross, he says, and it&#8217;s not his place to challenge those in charge.

But everyone knows what Holewinski did. He&#8217;s in all of the books. What he did was legendary.

But valor alone hasn&#8217;t garnered Holewinski the honor that legislators, litigators, historians, Wake Island veterans and family members say he deserves. While the 87-year-old&#8217;s World War II combat experience is long over, the fight for higher recognition is ongoing for those who know him.

Holewinski&#8217;s supporters are global and diverse &#8212; from Eric Holewinski, Ralph&#8217;s nephew and a Navy chief petty officer in Misawa, Japan, to Gregory Urwin, a Temple University history professor in Pennsylvania.

"I remain determined to lend all the aid in my power to see that Ralph receives proper honors from the service that counts his deeds among the proudest moments in its history," Urwin said in an e-mail to Stars and Stripes. "Every Nov. 10, Marines name Wake Island as one of their most cherished battle honors. This man did more than most of his fellow Marines to make that possible. The Corps and the Navy Department should connect the dots and rectify this long-standing wrong."

Although Holewinski was always "very modest" about what he did, Eric Holewinski read of his uncle&#8217;s valor in the history books.

"The hopes and dreams of my father (Ernie), especially, would be to award him the Navy Cross while he&#8217;s still alive," he said.

But burden of proof lies with the petitioner, Navy officials said last week, and sifting through history is a complicated task on all fronts.

Holewinski was one of 449 Marines sent to Wake Island to man the newly constructed U.S. military base in the Pacific. The small garrison there fended off the Dec. 8, 1941, Japanese air attack, despite being outgunned and outmanned.

But it could not stand against the Japanese warships that arrived Dec. 23.

During the Japanese amphibious assault, Holewinski volunteered to man a damaged but functional three-inch anti-aircraft gun, according to after-action reports. With help from three civilians, the gunners sunk one Japanese vessel and badly damaged another.

When the beach was overrun, Holewinski kept shooting his rifle and throwing grenades at enemy troops, according to a report from his commanding officer, 2nd Lt. Robert Hanna.

Hanna, who retired as a colonel and has since died, wrote that Holewinski continued to fire at the Japanese even after being hit by enemy grenade shrapnel in the back and shot four times in the legs. Hanna credited Holewinski with saving his life, and said Holewinski stopped shooting only when they were told U.S. forces had surrendered the island.

"There is no question in my mind that [Holewinski] would have kept fighting until he was killed," Hanna wrote.

Holewinski spent the next three years as a prisoner of war. Eric Holewinski saw the pictures after his uncle was released and called them "pretty scary looking." He said he would love to hear more stories about Holewinski&#8217;s war experiences, but he doesn&#8217;t want to be the one to bring it up and force his uncle to talk about bad memories.

Though Holewinski didn&#8217;t talk about it much, his war wounds had a lasting effect on his legs. Wake Island was the last place he ever ran, according to an interview he did for The History Channel.

Honorably discharged in 1946, Holewinski returned home to Michigan to serve as Otsego County sheriff for 34 years. Though Hanna put him in for a medal in 1946, he never received one. It was only in 1999 that Holewinski received a Bronze Star with a combat "V" device for valor from the Marine Corps Special Awards Board, with a final determination by the secretary of the Navy.

But that wasn&#8217;t good enough, Ernie Holewinski had said, as Hanna himself recommended Holewinski "for at least a Silver Star" after realizing that he did not get an award while Hanna &#8212; along with Pfc. Charles Hill &#8212; received the Navy Cross in 1946 for their actions in the battle.

This began Ernie Holewinski&#8217;s quest to upgrade his brother&#8217;s medal to a Navy Cross.

To upgrade the medal, the family first asked Headquarters Marines Corps. But they were denied. So, Ernie Holewinski applied to the Board for Correction of Naval Records (BCNR) at the Navy Annex in Washington, D.C. Once again, they were denied.

In many cases, the board is the court of last review. According to the Navy, a board packet should include a summary of action from the commanding officer or someone with first-hand knowledge of events; supporting documentation, such as investigations, situation reports, fitness reports, evaluations; and at least two notarized statements from eyewitnesses and a proposed citation.

The most recent packet included notarized statements from three historians, including Urwin, a plea from Hanna to award Holewinski the Navy Cross, a petition from the Wake Island Survivors and letters from two Michigan politicians.

But the burden is on the applicant to show error or injustice, and the board review of the packet did not prove that, the three-member panel ruled. They instead said the Bronze Star was the correct award for Holewinski&#8217;s actions.

"Although these standards and procedures are different from those in effect in 1946, that is the unfortunate consequence of the passage of more than 60 years," the board&#8217;s letter said.

The panel believed "it was unlikely" that a subordinate acting under orders would get the same decoration as the on-scene commander "unless something exceptional" had occurred. That was not the case, however, when Pfc. Hill was awarded the Navy Cross with 2nd Lt. Hanna.

Though Stripes made inquiries to the Board for Correction of Naval Records for several weeks, no one returned phone calls or e-mails to comment on the case.

However, Cmdr. Jeff Nelson works in the Council of Review Board&#8217;s Physical Evaluation Board in the same area as the BCNR. His cases go to BCNR if a servicemember isn&#8217;t happy with the decisions. Decisions there can take six to 12 months because they conduct careful investigations.

The board relies heavily on objective data, which can be difficult to get in wartime or for events that happened years ago, he said.

"Even today in Iraq, there&#8217;s no one out on the battlefield writing a report about who took a bullet or got a piece of metal lodged where," Nelson said. "That&#8217;s why awarding a Medal of Honor usually takes a long time. You have to prove heroism and true valor."

It&#8217;s an imperfect but good process, he said. "There&#8217;s no malice in the Navy process. We adjudicate it with an objective point of view."

Still, Holewinski&#8217;s family and friends have pledged to soldier on until "the right someone" pays attention, he said.

"I will continue my efforts to get Ralph his Navy Cross medal," Ernie Holewinski said. "I believe the just God, plus the spirit of Col. Hanna, wants Ralph to get this piece of hardware before he leaves this earth."

Quest timelineThe following is the progression of events in Ernie Holewinski&#8217;s quest to upgrade a medal his older brother, Ralph, received for action in World War II:

Dec. 23, 1941 &#8212; U.S. Marine Corps Cpl. Ralph Holewinski mans a 3-inch gun during the Japanese attack on Wake Island and, with the help of two civilians, takes out two Japanese warships. Second Lt. Robert Hanna wrote that he had to order Holewinski off the gun to take cover. Hanna also wrote that Holewinski rushed the Japanese landing force with his rifle and was hit in the back with grenade shrapnel. Holewinski also was shot in the legs four times. He spent the following three years as a prisoner of war in Japan.

Late 1946 &#8212; Hanna and Hill are awarded the Navy Cross; no action is taken regarding Holewinski.

August 1999 &#8212; Retired as a colonel, Hanna discovers Holewinski has not received an award and recommends he receive at least a Silver Star.

Aug. 4, 2000 &#8212; Secretary of the Navy approves the Bronze Star for Holewinski. A request is made to upgrade the medal to a Navy Cross, but it is denied by Headquarters Marines Corps.

September 2003 &#8212; A request for an upgrade to a Navy Cross is submitted to the Board for the Correction of Naval Records.

What is the seven-step process the Board for Correction of Naval Records follows when reviewing an application?

1. The applicant, heir or legal representative submits an Application for Correction of Military or Naval Records (DD Form 149) and supporting brief to the board.

2. All pertinent records are assembled from various sources, including the Veterans Administration.

3. The board may ask the appropriate military office to provide an "advisory opinion" regarding the claim&#8217;s merit.

4. The examiner reviews applicant&#8217;s military record, application, brief and any advisory opinion and prepares a summary.

5. The board reviews the case and decides if a hearing should be granted or the matter should be decided without a formal hearing.

6. The board&#8217;s recommendation is forwarded to the secretary of the Navy for approval.

7. If the secretary agrees with the board, the Navy implements the correction, including any monetary relief by the appropriate disbursing activity.

What happens if the board denies a petition?

If the three-member panel denies an application, the applicant is notified in writing of its decision and the reason for its action. Applicants may request reconsideration of the decision upon presentation of new and material evidence or other matters not previously considered.

Source: Board for Correction of Naval Records Web site