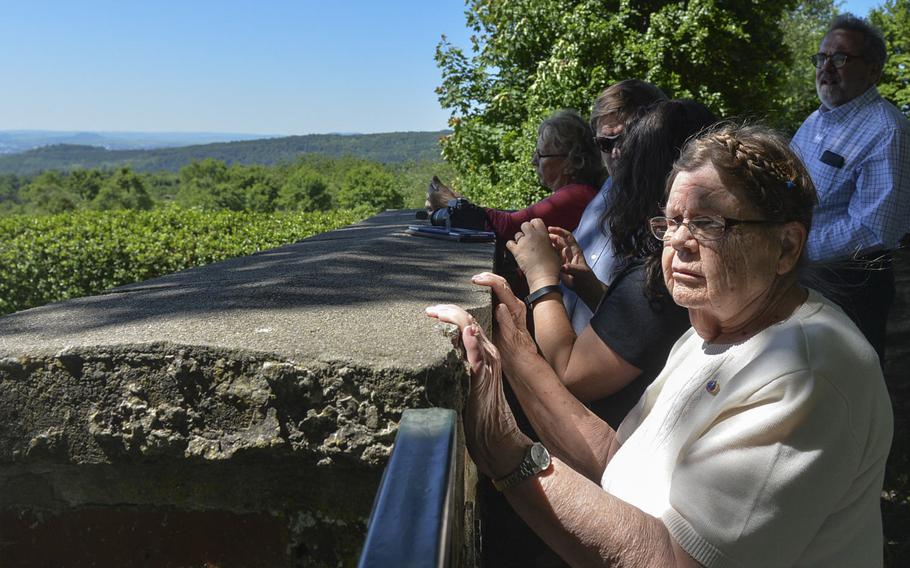 Nancy Hier, right, looks out over the Rhine Valley where her brother, Lt. Carl Heline, bailed out of his B-26 Marauder in Feb. 1945 and was later executed by the Nazis. Hier and her relatives visited a church cemetery in Rengsdorf where her brother was buried by townspeople near the end of World War II. (Chad Garland/Stars and Stripes)

Nancy Hier, right, looks out over the Rhine Valley where her brother, Lt. Carl Heline, bailed out of his B-26 Marauder in Feb. 1945 and was later executed by the Nazis. Hier and her relatives visited a church cemetery in Rengsdorf where her brother was buried by townspeople near the end of World War II. (Chad Garland/Stars and Stripes) 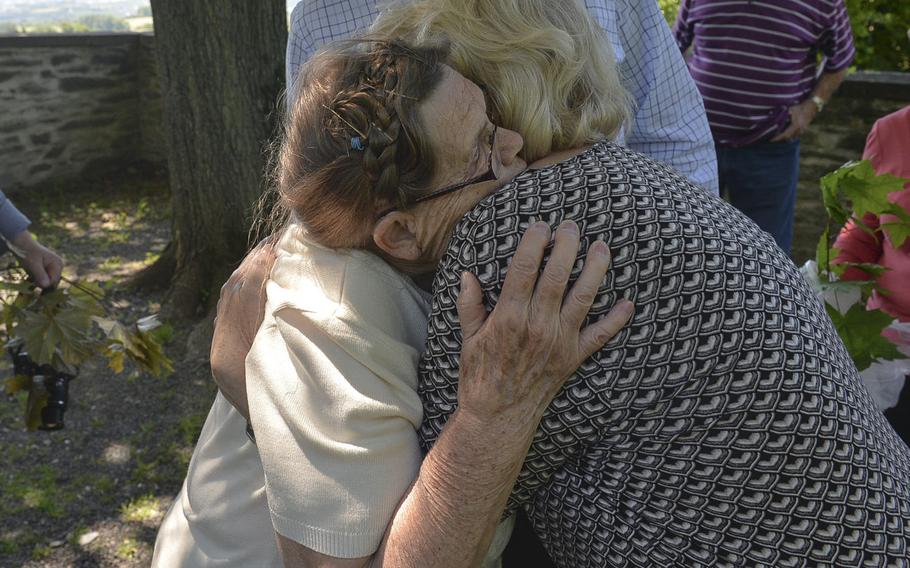 Nancy Hier, left, hugs Irmgard Kutscher near the plot where Hier's brother, a World War II pilot executed by a Nazi SS officer, was buried in a churchyard in 1945. Kutscher's mother found the pilot's body and helped ensure it was properly buried. Hier and her family visited the church over Memorial Day weekend and met with locals who recalled the incidents surrounding the pilot's recovery and burial. (Chad Garland/Stars and Stripes) 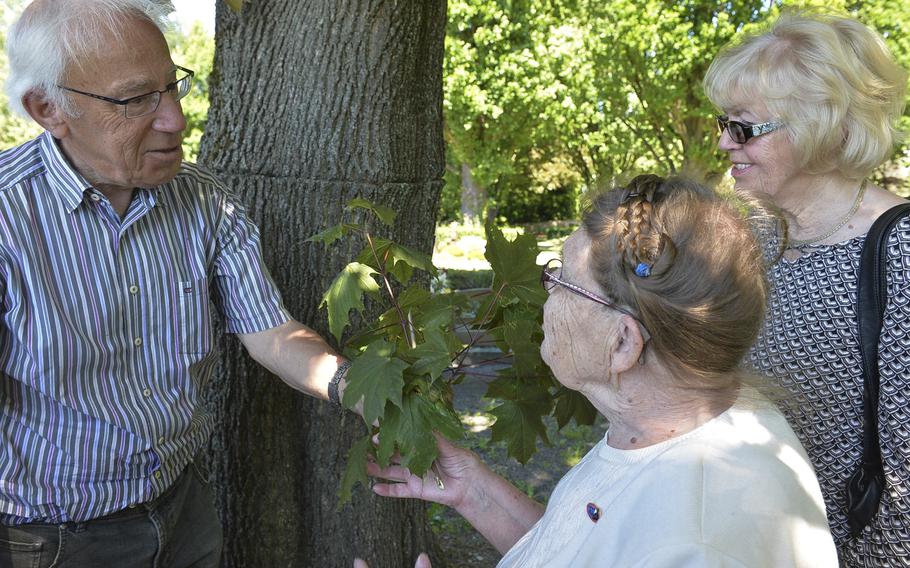 Karl Hoffmann hands Nancy Hier a cutting from a tree that stood near where her brother, an American pilot shot down near Rengsdorf near the end of World War II, had been buried in 1945. Irmgard Kutscher, who was 8 and collecting firewood in the area where the pilot's body was found by her mother, looks on. (Chad Garland/Stars and Stripes) 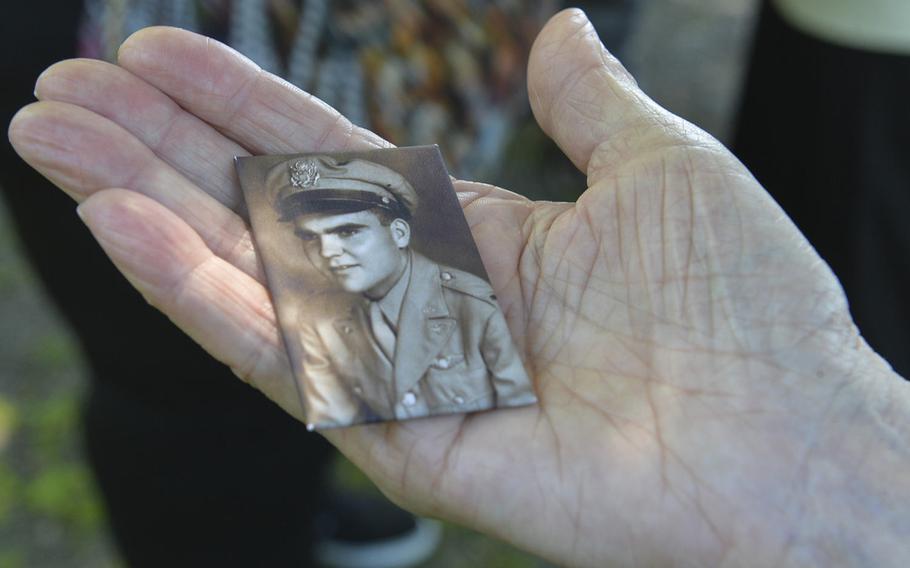 Irmgard Kutscher holds a small military portrait of Lt. Carl Heline, an American B-26 pilot shot down near Rengsdorf in 1945. Heline's relatives visited the site of his burial in a Rengsdorf churchyard and presented Kutscher with the photo pin as a memento--her mother had found Heline's body after he was executed by an SS officer. (Chad Garland/Stars and Stripes) 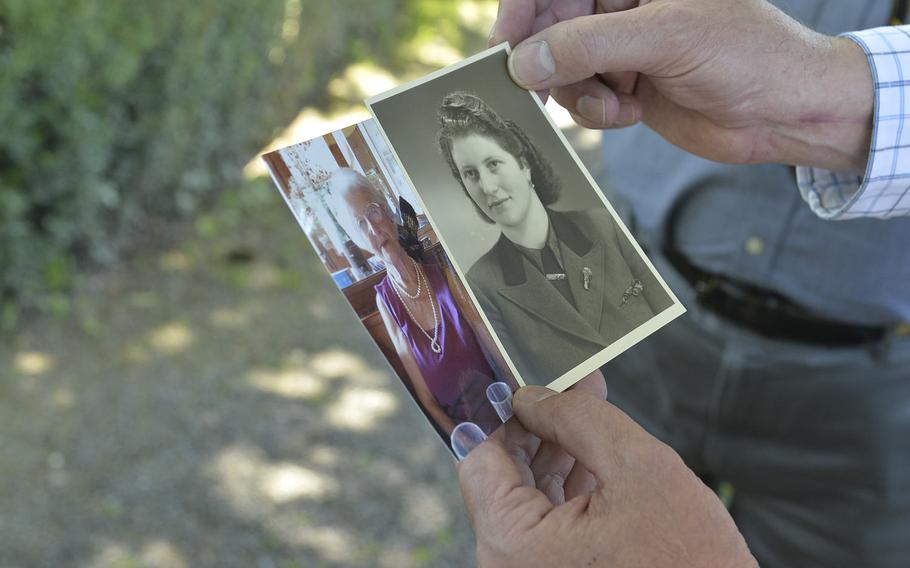 Matthew Botkin holds a pair of photos of Else Runkel--one from the 1940s and one from 2013, a few years before her death. Runkel found and helped ensure the proper burial of Botkin's uncle, Lt. Carl Heline, a downed U.S. B-26 pilot, in February 1945 after he had been executed by the Nazis. Botkin and his family, including Heline's sister, met Runkel's daughter Irmgard Kutscher over Memorial Day weekend in Rengsdorf. (Chad Garland/Stars and Stripes) 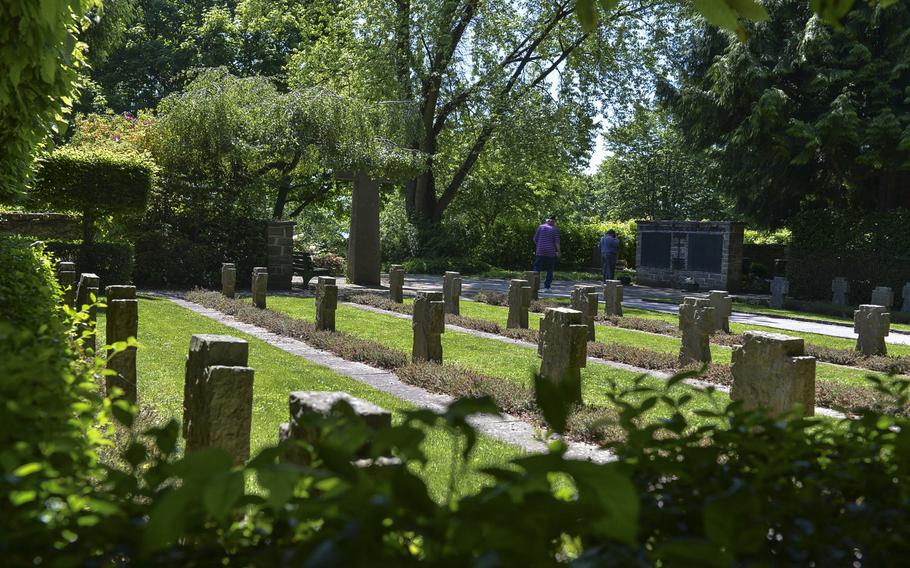 Family members of downed U.S. pilot Lt. Carl Heline, executed by the Nazis in 1945, visit a memorial dedicated to German soldiers killed during World War II at a church cemetery where Heline was buried briefly at the end of the war, before his body was recovered by the U.S. Army. (Chad Garland/Stars and Stripes) 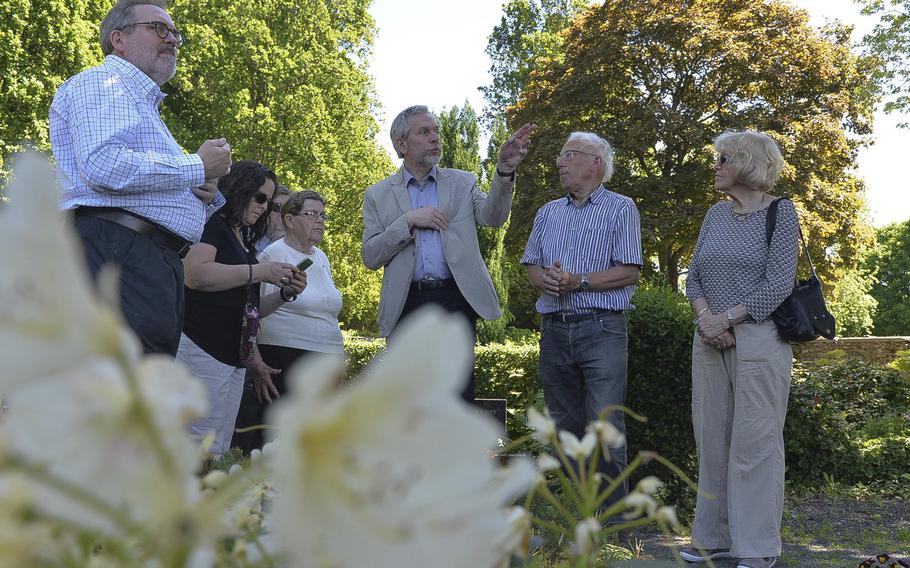 Friedemann Stinder, pastor of the Rengsdorf Evangelical Church, center, points out the Rhine Valley to the family of U.S. pilot Lt. Carl Heline, who was shot down over the valley in February 1945. The family visited the church cemetery where a local pastor and villagers buried Heline's body with a ceremony and decorations, in spite of Nazi Party orders to show no respect to Allied troops. (Chad Garland/Stars and Stripes)

RENGSDORF, Germany — After marching Army Lt. Carl Heline into the woods near here, an officer in the SS — the Nazi Party’s most fanatical group — shot the captured American pilot once in the back of the head and left him to rot or be eaten by animals.

It was one of many brutal executions in World War II’s waning months, when even German civilians were told to show Allied troops no mercy, especially downed flyers.

But local villagers who found the Iowan’s body took pity and buried him at the village church. Earlier this year, when his sister Nancy Hier traveled to the Evangelical Church in Rengsdorf, she learned of other small mercies shown him, even in defiance of Nazi Party orders.

The visit added new and comforting details about the last chapter in her brother’s life, illustrating the small traces of humanity that endured the cruelty of WWII.

A native of the village, Irmgard Kutscher, 81, told Hier about the day in February 1945 that her mother found the pilot’s body and took it to the church. Kutscher, then 8, had been helping her mother gather firewood. She had long felt sorry for the “poor man,” as had her now-deceased mother, she said.

“Never in our wildest dreams did we think ... there was even the remotest possibility to meet someone who was there when his body was found,” said Matthew Botkin, a nephew escorting Hier.

The meeting was another small kindness arranged by people from the village after they learned of Hier’s plans to visit the church grounds and the Netherlands American Cemetery in Margraten, Holland, where Heline was reburied after the war. Hier, 87, had visited the Holland grave site as a teenager in 1949 and knew this visit might be her last.

After reading about the trip online and reaching out to Botkin, Christian Strauss and his mother Inge, Rengsdorf natives now living in Florida, tracked down villagers connected to Heline’s burial to help make the visit more meaningful.

Hier, bent slightly and shuffling through the churchyard, was near tears after meeting Kutscher. She was overcome by the villagers’ “regard and respect,” she said. “I just thank everybody for being a part of this.”

Over the years, Heline’s family had pieced together much of his final hours, beginning with a 54-bomber, single-file Valentine’s Day air raid in 1945, when the B-26 he was co-piloting was downed by anti-aircraft flak during a run on a railroad bridge at Engers. Five of the six members of the aircrew later reunited at a prisoner-of-war camp, but Heline’s fate was unknown for almost a year.

During that time, the 23-year-old’s parents would sometimes get hopeful reports that he’d been seen alive, said Hier, a 10th-grader when her brother disappeared. But word of his death finally came in January 1946.

In later years, on July Fourth, his parents would display his burial flag and the Army missing-in-action notice, but “that was about all the story they would tell,” said John Hissem, Hier’s son, who accompanied her. After their death, the family found old letters, flight logs and documents they’d saved, he said, which helped flesh out Heline’s story.

But questions remained, such as whether he’d been given a proper burial or just dumped in an unmarked grave. Postwar records indicated Nazi officials argued against the local pastor’s performing burial rites, but the family was unclear about who won the fight.

Germans at the time were particularly merciless toward Allied flyers, purportedly as revenge for bombings and civilian death, said Friedemann Stinder, the Rengsdorf church’s current pastor. Prisoners “were lucky” if they were taken to POW camps.

“There were lots of murders in this area at the end of the war ... especially pilots,” he said. “That was of course against international law — human law — and God’s law.”

But not all Germans were so coldhearted. Stinder recently uncovered church records showing the pastor had given Heline a Christian burial in defiance of the Nazis, a detail he shared with the family.

That wasn’t all, according to Karl Hoffmann, something of an amateur local historian Inge Strauss had tracked down. Hoffmann’s father had tended the cemetery grounds during the war and, in May 1946, had helped Army investigators unearth the graves of Heline, another American pilot and a British flyer there.

Ashamed that the corpses had not been given caskets or grave markers, the villagers covered the bodies in flower wreaths before burying them, Hoffmann said.

The family was “a bit overwhelmed but very grateful” to learn these things, Botkin said. It was more than they’d expected from the trip.

“Sorry for what has happened,” Stinder said.

Standing near the old burial plot, in the cool shade of a tall tree that had been no more than a sapling in 1945, Hier squeezed Kutscher’s hand. Spreading before the two women, just over a short brick wall, was the green Rhine Valley. Birds sang and leaves rustled.

Hier asked for a leaf from the tree her brother had been buried alongside. Hoffman cut her a thin, green branch and later presented her a tiny sapling to plant back in Iowa.