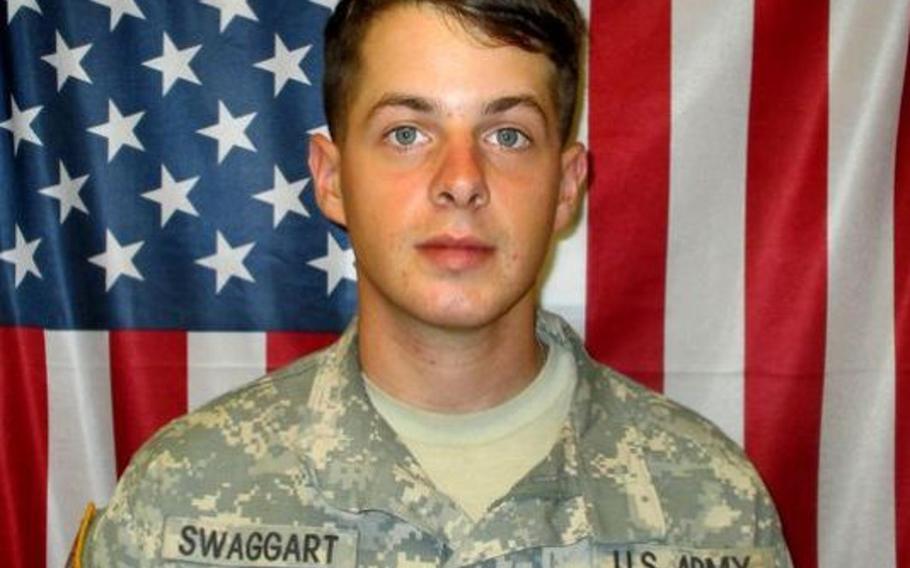 Pfc. Bailey Swaggart’s family is in the midst of grieving his loss, waiting for answers about his death, and trying to come to terms with what they know so far.

Swaggart died Feb. 19 at Manda Bay naval base, Kenya. He got out of a Humvee while on guard duty to check into a brush fire by the runway and was bitten by one of Africa’s many deadly snakes, according to military authorities.

Swaggart, just three weeks into his deployment from Fort Bliss, Texas, stepped out of the vehicle sometime in the afternoon, said his aunt, Alisa Lear. Yet he wasn’t found for two hours, after a search with Kenyan helicopters.

His body was immediately returned to the States for autopsy, Lear said in a phone interview. The autopsy was conducted by the Armed Forces Medical Examiner System at Dover Air Force Base, Delaware, according to a spokesman for the medical examiner system.

“We were told within 48 hours that their primary assumption was (that the cause of death) was a snakebite,” she said. “Of course his parents and his sisters are devastated. It’s a huge loss to all of us.”

Snakebite is an exceedingly rare cause of death for U.S. troops deployed throughout the world.

Snakebites caused no U.S. military deaths from 1998 to 2004, according to a 2004 report by the Navy Operational Medical Lessons Learned Center. The report cited the DOD Mortality Register, which contains detailed cause and manner of death of all U.S. active-duty personnel since 1998. Additionally, the Armed Forces Medical Examiner’s mortality files, going back to 1978, showed zero snakebite deaths through 2006, the report said.

For Swaggart’s family, which lives in rural Louisiana where venomous snakes are a distinct hazard, the tragedy of his death is compounded by the fact that Bailey was well versed in avoiding snakebites and what to do if bitten. He was instructed from an early age not to overturn rocks or fallen branches by hand, not to step over a log or other obstacle if the other side wasn’t visible, his aunt said.

“We have snakebite kits all over the property,” Lear said. “My husband has been walking around, shaking his head for weeks, saying, ‘A snake. A damn snake.’"

The family is waiting for the medical examiner’s office to issue a final report on Swaggart’s cause of death.

Paul Stone, spokesman for the Armed Forces Medical Examiner, said it usually takes about four weeks to complete a report. Stone said the military does not do preliminary reports, as civilian medical examiners do. “We don’t want anything that can possibly be conjecture,” he said.

Concluding that Swaggart died of a snakebite was premature, Stone said. “Anytime anyone suspects a snakebite — a lot of things can look like snakebites,” he said.

A number of questions surrounding Swaggart’s death won’t be answered until a command investigation report is completed.

Were troops prevented from searching on foot because it was feared more snakebites might occur? Was there a delay in reporting the emergency? Military authorities have told Stars and Stripes that they were working through “a variety of explanations” on why it took two hours to locate Swaggart.

Did the other soldier in the Humvee — the driver — see the snake or hear Swaggart call for help? What, exactly, happened?

“We have all those questions,” Lear said. “Who was the driver? Why didn’t he step into the woods?” she said. “The other side of the coin is that we feel so sad for him.”

Military authorities, who declined to be identified because they are not authorized to speak about the case, have told Stars and Stripes that the snake was thought to be a black mamba or a viper.

Black mambas are one of Africa’s most feared snakes, whose venom disrupts the central nervous system, can kill within 20 minutes and is almost invariably fatal without anti-venom treatment,. Vipers’ venom destroys red blood cells, disrupts blood clotting and causes organ degeneration and tissue damage. Ubiquitous on the continent, they kill more Africans than any other snake.

An estimated 30,000 to 94,000 people, primarily in Africa and Asia, are killed by snakes annually, according to the World Health Organization, and many thousands more are left permanently disabled and disfigured. Most of the deaths could be avoided if anti-venom were more readily available.

Only five to 12 people in the U.S. are estimated to be killed each year by snakebites, most of them by diamondback rattlesnakes, a type of viper.

Swaggart’s family has only praise for how the military has responded following Bailey’s death.

“They’ve been extremely kind to us,” Lear said. She said his commanders had expressed condolences, that their casualty assistance officer was most helpful and that members of his Fort Bliss-based unit had come halfway across the country for his funeral on March 8. She said she could see how his death had changed them. “Now, the danger was brought home to them,” Lear said. “You could see it in their faces.”

“The thought that he died instantly brings us tremendous relief. Or that he lost consciousness,” she said. “That brings us some peace.”

Swaggart, 25, was described as a favorite by fellow soldiers in news reports: thoughtful but light-hearted, conscientious yet full of fun.

“I would give you a million dollars for you to have met the young man,” Lear said. “He’s a huge loss to us. We say every day that we’re going to do what Bailey would have wanted us to do.”

That includes his parents, three older sisters, aunt and uncles, a nephew, 11, and seven nieces all under age five.

“There is tremendous love and energy that will carry Bailey’s memory for a long, long time,” Lear said.