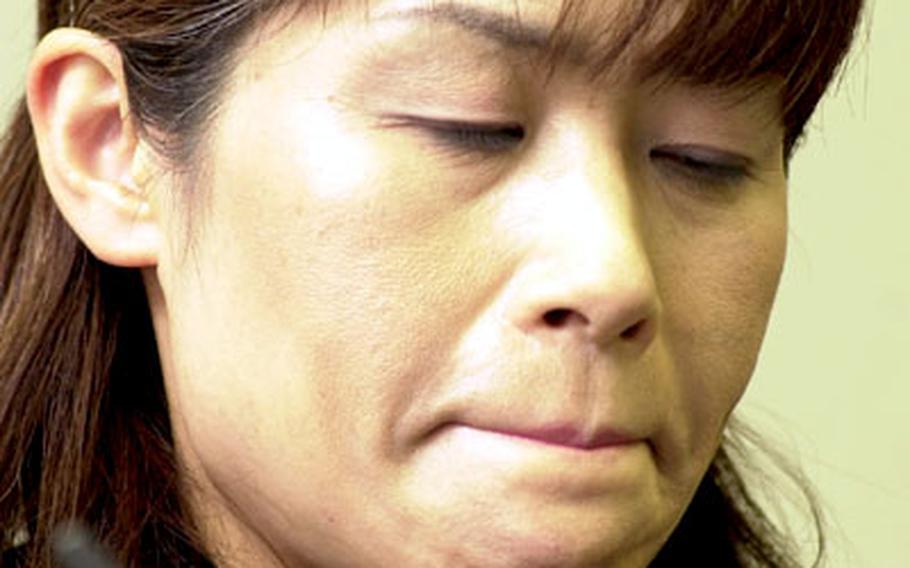 Masumi Terata, mother of one of the Ehime Maru victims, pauses to collect herself while recounting her meeting Monday with former Navy Cmdr. Scott Waddle. (Joseph Giordono / S&S)

TOKYO &#8212; After an emotional two-hour meeting with former Navy Cmdr. Scott Waddle, one of the two Ehime Maru victim families holding out has decided to settle its lawsuit.

Masumi Terata, whose 17-year-old son, Yusuke, was one of nine victims in the collision with the USS Greeneville, said at a Monday news conference that the private meeting earlier in the day had both the Terata family and Waddle in tears.

Terata said Waddle gave her a handwritten letter of apology; she showed him a photo of her son, which he stared at silently for several moments before continuing, she said.

In earlier interviews, the Terata family has maintained that one of the conditions for settling their suit would be a face-to-face meeting with Waddle. After Monday&#8217;s meeting, they decided the time had come to &#8220;move on with our lives,&#8221; Masumi Terata said.

Waddle told Terata that he could particularly empathize with her situation, as he has a 15-year-old daughter, Terata said.

The Terata family&#8217;s lawyers said the settlement likely would be finalized in January, meaning that 34 of the 35 lawsuits will have been resolved.

Earlier in the day, Waddle&#8217;s attorney also held a news conference in which he said Waddle would not discuss his meetings with the families.

&#8220;I was pleased that this became a reality, since I have requested to meet Mr. Waddle from the time of the accident,&#8221; Terata said.