Family: Lynch isn't saying much about her ordeal as POW 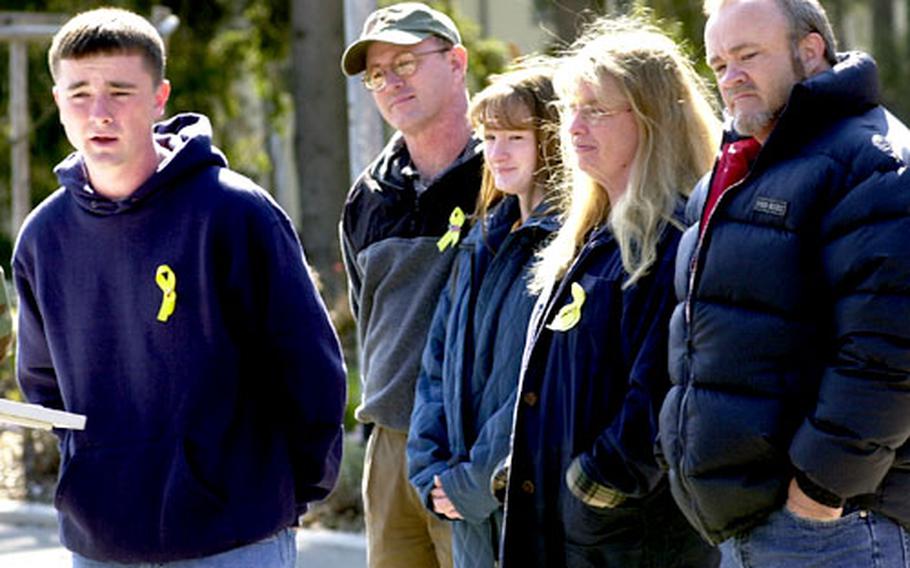 Gregory Lynch Jr., brother of ex-POW Jessica Lynch, talks to the press in front of the Fisher House at Landstuhl, Germany. Lynch and his father Gregory Sr., right, answered questions about Jessica&#39;s condition and their reunion with her. Joining them were Jessica Lynch&#39;s mother Deadra, sister Brandi and cousin Dan Little. (Michael Abrams / S&S)

Lynch spoke Tuesday outside the Fisher House, where family and friends of patients treated at Landstuhl Regional Medical Center can stay. He arrived early Sunday morning with his parents, Gregory Sr. and Deadra, as well as his sister Brandi and cousin Dan Little.

A special operations team rescued Jessica on April 1 from an Iraqi hospital, nine days after she was captured. Her unit, the 507th Maintenance Company, was ambushed near Nasiriyah.

News reports and rumors about her wounds had &#8220;troubled the family a lot,&#8221; her brother said. Jessica arrived at the hospital April 2. She was being treated for fractures to her right arm, left leg, right foot and ankle, as well as problems in her lower back. Doctors operated on the arm and leg fractures, as well as on her damaged spine, during several procedures last week.

The Lynch family members are wearing yellow ribbon pins as symbols of hope for others whose loved ones are missing in Operation Iraqi Freedom, Greg Lynch Jr. said.

He said Jessica hasn&#8217;t talked much about the ambush or her time in captivity. She is aware, however, that eight others in her unit were killed in the fight.

The family and the doctors aren&#8217;t pressing her to go into details about anything that happened. In fact, she&#8217;s not reading newspapers or watching television at all.

The family has been with Jessica as much as possible over the past several days, sometimes spending an hour or a more at a time sitting with her.

When Jessica leaves Landstuhl, she will go to Walter Reed Army Medical Center in Washington, D.C. Rubenstein said doctors have not yet decided when she will return to the United States.

As of Tuesday, the hospital has treated 137 troops with battle injuries from Operation Iraqi Freedom, Rubenstein said.