Family loses all to ticks at Kadena 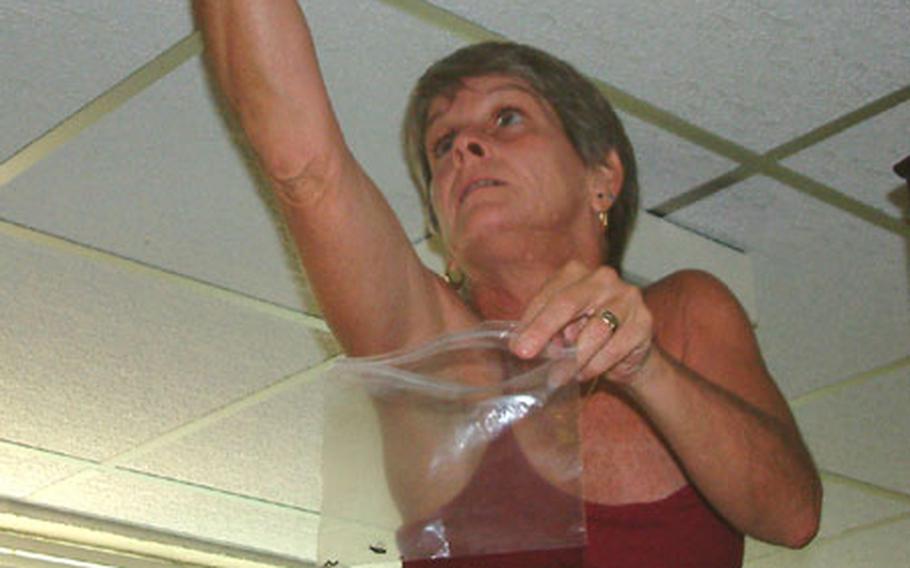 Sharon Girard captures a tick crawling along a ceiling tile at her Kadena Air Base home. (David Allen/Stars and Stripes)

KADENA AIR BASE &#8212; An infestation of ticks in base housing here has officials re-examining the inspection process prior to assigning units to new families.

Girard, 44, says the failure of base housing inspectors to detect ticks in a house they assigned her in June, has cost her family thousands of dollars.

The nightmare began back in June, when Marine Lt. Col. Charles E. Girard, the Food Services officer for Marine bases on Okinawa, finally got what he wanted: a house closer to his office on Camp Kinser. For the past seven years the family has been living on Camp Courtney. The move put him 30-45 minutes closer to work.

His wife said they moved into their new home June 9. Within days they realized they had a problem.

&#8220;I was sitting on a stool in the kitchen while I was putting food away, and I saw a tick on my leg,&#8221; Sharon Girard said. &#8220;The next day we found a couple more. On the 11th my husband found six ticks in our bathroom in the time between he showered and shaved.

Girard collected about a dozen ticks and called the entomology section of the 718th Civil Engineering Squadron. She handed them in a plastic bag to an inspector who arrived the same day.

The inspector confirmed the infestation and the house and yard were sprayed immediately.

They had their two dogs dipped and shaved and left them with friends. The house was sprayed again and the Girards left.

The Girards were given a new house around the corner, but had to leave all of their belongings behind because of the infestation. The Air Force arranged to have the house professionally fumigated.

Girard said the family was prepared to lose some personal effects, but weren&#8217;t prepared for what happened next.

After the house&#8217;s four-day fumigation treatment they were allowed inside to check on their belongings.

What really irks her, though, is that she believes housing officials could have prevented the problem. &#8220;The house was treated for ticks a year ago,&#8221; she said. &#8220;It should&#8217;ve been red-flagged. Entomology should have been out there and inspecting it the day after they moved.&#8221;

Mike Reese, assistant chief of housing for the 718th Civil Engineering Squadron, said procedures in place prior to the tick fiasco provided no warning.

&#8220;A year ago last July, the unit was treated for a pest control problem that included ticks,&#8221; he said. &#8220;However, the former occupants never identified a further problem.

&#8220;We considered the problem taken care of since there were no further indications of a problem from the occupants,&#8221; he said.

The same question was asked during the final inspection of the house after the occupant&#8217;s belongings were removed, Reese said. &#8220;Again we asked the standard questions,&#8221; he said. The occupants said there was no change.

During the final inspection a housing official walks through the house with the occupant. &#8220;There was no indication of a pest control problem &#8212; no evidence of tick infestation,&#8221; Reese said.

The house was then professionally cleaned and painted. Reese said it took three days to paint the house and no one noticed any ticks.

The ticks in the building had gone dormant, Kirk said. &#8220;And they were in the ceiling &#8212; they&#8217;d gone into hiding. &#8220;What could have happened is that we could have had an occupant that released bug bombs in there prior to termination and believed the problem was solved,&#8221; he said. &#8220;There would have been no visible ticks on the ground, but there could have been a mass migration by the ticks to higher ground &#8212; the ceiling.&#8221;

Kirk said the insects, called brown dog ticks, are difficult to eliminate. &#8220;Ticks are the hardest pests to control. It can take up to two months to get them under control.&#8221;

Lt. Col. Girard said the infestation could have been prevented if dog owners would take better care of their pets, not allow them to run loose and always use anti-flea and tick pills, collars and skin treatments. The Girards have two dogs of their own.

Reese was insistent that he did everything possible for the Girards throughout their tick trauma.

&#8220;From the time that we were notified to this very minute we have been very pro-active in supporting the Girards every step of the way,&#8221; he said. He promised to be supportive of the Girards&#8217; damage claim.

The situation made his command, which is in charge of all military family housing units on Okinawa, change the inspection process.

&#8220;From now on, when we know there have been animals in the quarters, we will make sure we will inspect and treat the quarters before allowing a new tenant to move in,&#8221; he said. &#8220;Entomology will inspect every home that had pets, whether or not the tenants reported any problems.

A check with the company that makes the chemical used for the final fumigation, Phostoxin, or aluminum phosphide, confirmed her worst fears.

&#8220;Likely much or all of the electrical systems will have to be replaced,&#8221; a technical director for Degesch America, of Virginia, wrote in response to the Girards&#8217; query. &#8220;Switches, thermostats, television sets, radios and other electrical items will be destroyed.&#8221;

Using the chemical in a home was not recommended, wrote Donald Shaheen, technical director for Degesch.

&#8220;Homes and other structures containing phosphine-sensitive equipment must not be treated with phosphine,&#8221; he wrote. &#8220;Your fumigator, although he apparently did a good job of sealing your house and providing a sufficient dosage to kill the pests, is incompetent.&#8221;