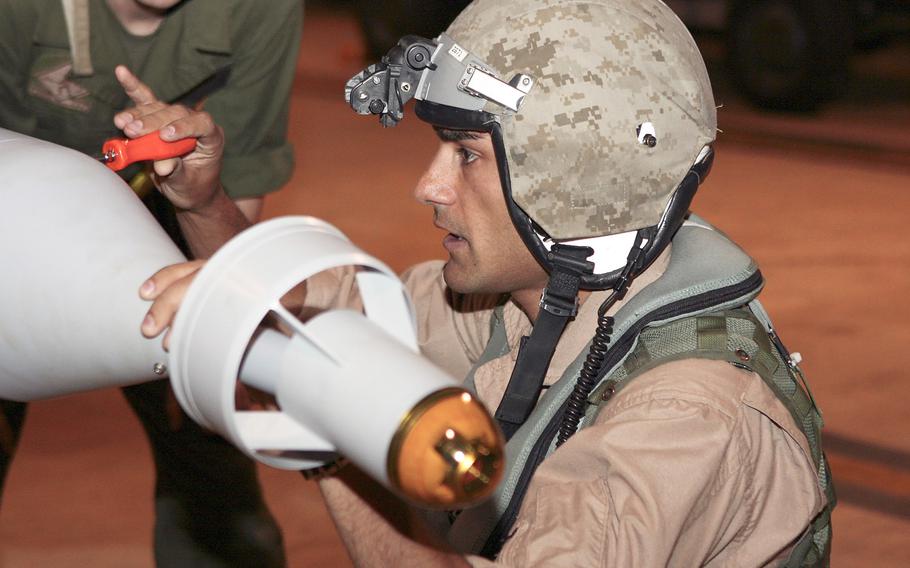 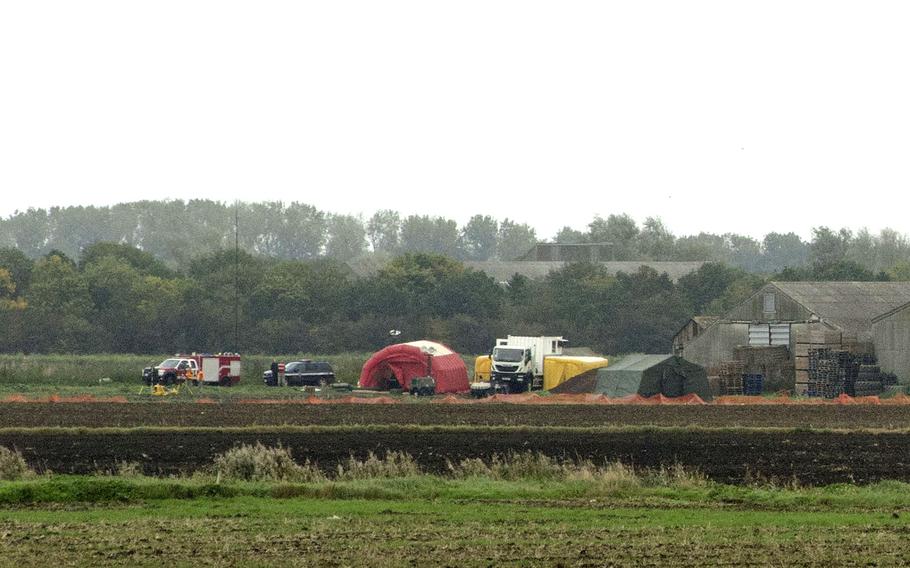 Officials worked for a third day Friday, Oct. 23, 2015, at the site of a U.S. Marine F/A-18 crash on a farm in Redmere, England. The plane had taken off from nearby RAF Lakenheath. The pilot, Maj. Taj Sareen, was killed. (Adam L. Mathis/Stars and Stripes)

Maj. Taj Sareen, the Marine Corps pilot killed Wednesday when his F/A-18C Hornet fighter jet crashed near RAF Lakenheath in England, left behind a young daughter and a close-knit family in Hillsborough, Calif.

Sareen, 34, was remembered by grieving friends and family on social media and in interviews with local media outlets this week as a confident yet humble person, a devoted father, friend and son with a zest for life and a passion for fast cars.

“I spoke to my son two hours before he took off. He said, ‘See you in two days, Dad,’” K.B. Sareen said in a tearful interview Thursday with San Francisco ABC affiliate KGO-TV.

“So, I’ll wait for those two days forever,” he told ABC7 News.

Sareen became a Marine Corps fighter pilot in 2005. At the time of the crash, he was assigned to Marine Fighter Attack Squadron 232, based at Marine Corps Air Station Miramar in San Diego.

The jet was one of six F/A-18C Hornets returning to California from Bahrain, where they were deployed as part of a Marine task force for operations against the Islamic State group in Iraq and Syria.

Sareen’s last post on Instagram, dated two days ago, is a photo of a Hornet with the caption: “Our UK arrival. That much closer to #home.” The post drew hundreds of comments, including one from a person who thanked Sareen “for always waiting & holding the elevator open for me and everyone else.”

“RIP hero to the end,” said another commenter.

Chris Jewett, a photographer for ABC7 News who attended the University of San Francisco with Sareen, said Sareen “had this confidence and infectious smile.”

A military career seemed like something he was called to do, “something meaningful,” Jewett told the station.

Sareen’s aircraft went down soon after takeoff from RAF Lakenheath about 10:30 a.m. Wednesday, crashing in a farm field in the town of Redmere, about six miles northwest of Lakenheath. David Arnold, who works at A&C Auto Refinishers near the crash site, said on Thursday he heard something like an “explosion and thud — more like a thud.”

He didn’t know what had happened, but a customer who came in claimed to have seen fire from the crash and a black mushroom cloud, Arnold said.

The Marines said Thursday the cause of the crash was under investigation.

“Our thoughts and prayers are with the family, friends and fellow Marines of Maj. Sareen, and we are currently providing support to those affected by this tragic incident,” Maj. Gen. Michael A. Rocco, commanding general of 3rd MAW, said in a written statement Thursday.

The Marines said Thursday the cause of the crash was under investigation.

A spokesman for Lakenheath said Friday he did not have additional information, citing the investigation.

By Friday, officials had extended the cordon around the crash site. A spokesman for Cambridgeshire Constabulary said that could be for safety reasons but he did not elaborate.

His military awards include two Navy and Marine Corps Achievement Medals and one Air Medal Strike/Flight 5, according to the Marines.

Sareen had deployed to Afghanistan in 2010 in support of Operation Enduring Freedom.

Annie Driscoll, the account’s organizer, says on the page that she has known Sareen since 2005, “from our glorious pilot training days.”

“These funds may go to college or perhaps as Taj would love, her first car,” Driscoll wrote on the site, referring to Sareen’s daughter.

Sareen’s father told ABC7, that his son loved cars and “said something like, ‘you can sleep in a car but you can’t drive a house.’”

His dad had it right. On his Instagram account, Sareen wrote: “You can sleep in a car but you can’t drive a house. Speed is life, altitude is life insurance.”