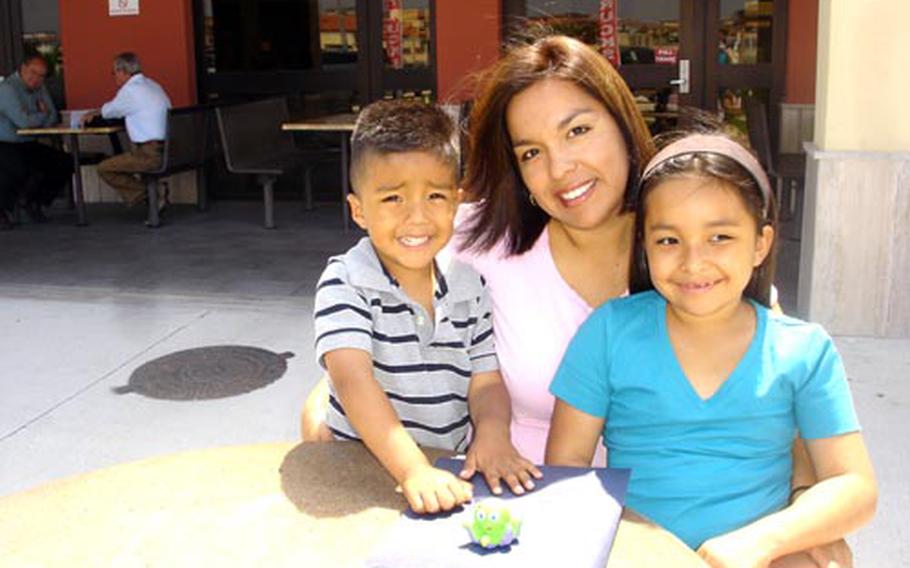 Maria Ortiz, with her son, Andrew, 3, and daughter Adrian, 8, will be moving to the Navy Support Site in Gricignano, Italy, because soil and water tests on their house in Villa Literno revealed high levels of arsenic and other harmful chemicals. (Lisa M. Novak / S&S)

The family&#8217;s home was one of seven houses that the Navy recently tested as part of an environmental pilot study to determine if living in Naples is a health hazard. The initiative was begun in January by the Navy and Marine Corps Public Health Center because of concerns over uncollected trash, air pollution caused by burning trash and possible soil contamination caused by illegal dumping.

What the Navy found is what has Maria Ortiz nervous.

Of the seven homes tested, six were determined to be "potentially of concern" for health risks. The Ortiz home was deemed "unacceptable."

"We were notified two weeks ago," she said in an interview Thursday morning. "My husband was called by the base to let us know. Originally it was only the tetrachloroethene (a chemical found in solvents), but then they said they also found arsenic in the water and the soil."

A second sample was taken from the home, according to a letter the Navy provided to the Ortiz family.

But the letter makes no mention of a second sample test for the arsenic.

"I&#8217;m in my first trimester, so this is a critical time for me. I&#8217;m a little worried," she said. "My kids play outside, they eat the fruit off the trees. They do what kids do. So for this to come back was really worrying."

The arsenic levels found in the soil sample taken at the Ortiz home was 40 times greater than what the EPA considers a potential health concern for a 30-year exposure level, according to the lab results. The results for the water samples were more troubling. Arsenic levels exceeded that value by more than 180. While certain levels of arsenic in tap water are common in areas of volcanic activity, the EPA Web site says that higher levels of arsenic can come from "certain fertilizers and animal feeding operations."

Stars and Stripes sent an e-mail request and made phone calls to the Navy to find out why there was no mention of the arsenic in the second sample, but Navy officials did not respond.

Ortiz, 33, said she is anxious about the health implications for her unborn child and the rest of her family.

At a briefing Wednesday for public affairs officials and a Stripes reporter, Navy officials said all residents are continually encouraged to seek medical treatment and document any health concerns they may have but that none of the specific findings of the pilot study warranted medical treatment or testing.

Nevertheless, the Ortiz family requested that the Navy move them out of the off-base house and move them into the housing area at the support site at Gricignano &#8212; a request the Navy granted.

But Ortiz &#8212; who works as a volunteer for the base legal office and with the Navy and Marine Corps Relief Society &#8212; said she&#8217;s also worried about the possibility of others renting the house, or houses with similar problems.

"When the landlord told me she had some Americans coming to look at the house, it really hit me in the gut," said Ortiz, who will be moving into base housing next week. "I&#8217;ll leave the house, and my family should be OK, but I can&#8217;t just say it&#8217;s not my problem anymore.

"It&#8217;s not the right thing to do. Especially since our government pays such high amounts of money for (us to rent) these houses. &#8230; It&#8217;s not acceptable to let other American families, people with small kids, move into this house."

Navy officials say they have since notified the base housing office to ensure the database of homes available to rent on the economy included any risk information based on the pilot study, and future information gathered from a larger study of 130 homes that is currently under way.