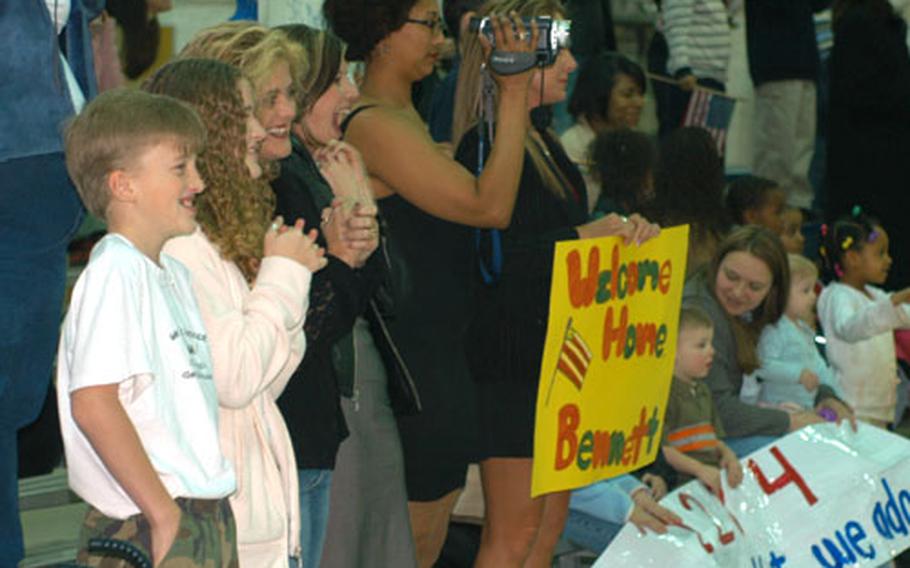 Families react Wednesday to their loved ones from the 5th Battalion, 158th Aviation Regiment, marching into the hangar Wednesday after a one-year deployment to Iraq. A delay of several hours was forgotten when the hangar doors opened and the troops marched in to cheers and whistles from the crowd. (Rick Emert / S&S)

GIEBELSTADT, Germany &#8212; After a nearly three-hour delay and an intentionally short welcome ceremony, families from 5th Battalion, 158th Aviation Regiment finally got to dash across the hangar Wednesday to hug the troops: husbands, wives and friends they hadn&#8217;t seen in 366 days.

Although the younger children were growing impatient, the delay was forgotten when the hangar doors swung open to a formation of troops in desert camouflage.

As the announcer yelled: &#8220;Ladies and gentleman, welcome America&#8217;s newest heroes,&#8221; family members cheered and whistled from bleachers on the opposite side of the hangar.

Children held banners and signs and looked for their parents in the formation of about 150 soldiers. Another 250-300 soldiers had returned to Giebelstadt in smaller groups last week.

&#8220;What helped us get through this was having very supportive neighbors who were going through the same thing,&#8221; MacCormack said.

The lengthy deployment wasn&#8217;t any easier on the soldiers.