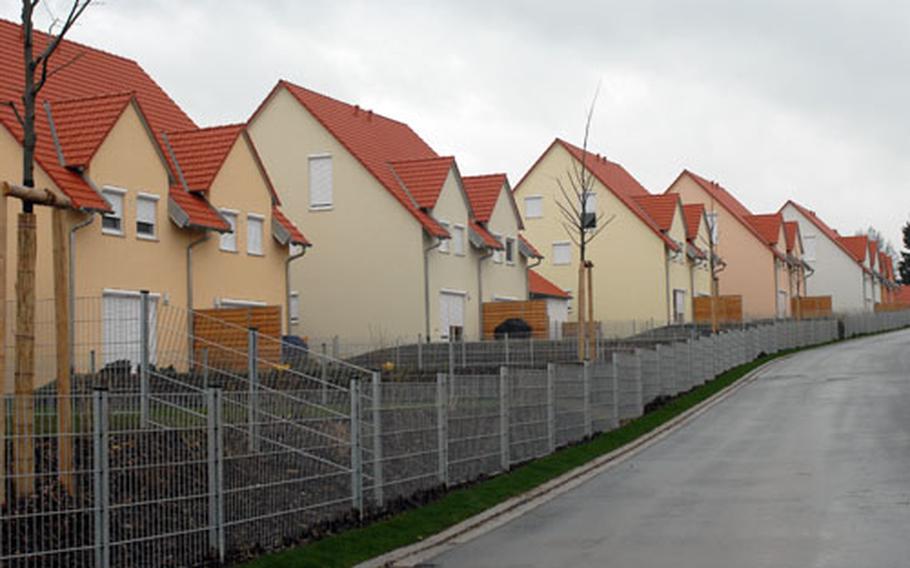 The new off-post military housing area at Netzaberg is the most sought-after location for soldiers and families moving to Grafenwöhr. (Seth Robson / S&S)

GRAFENW&#214;HR, Germany &#8212; Families of the 172nd Infantry Brigade say they are worried that a lack of military housing in the Grafenw&#246;hr area might force them to move into substandard homes or pay a real estate agent 1,800 euros to find a decent place to live.

More than 1,500 brigade soldiers &#8212; and a similar number of dependents &#8212; are on their way from Schweinfurt to Grafenw&#246;hr this summer in the first phase of the 172nd&#8217;s redeployment to the training area. And while Army officials have assured soldiers and family members that they will not be forced to move until housing is available, two 172nd spouses said their husbands&#8217; units want them to move to Grafenw&#246;hr by next week.

Instead, U.S. Army Garrison Grafenw&#246;hr spokesman Franz Zeilmann stated in an e-mail that less than half of those on the housing waiting list are coming from Schweinfurt. Additionally, families on the waiting list for two-bedroom homes mostly move into a private rental after a wait of up to a month.

&#8220;The Garrison Housing Office assigns 10 to 20 families with two-bedroom requirements to private rental homes per week. While the two-bedroom government apartments are limited at this time, the housing staff continues searching for additional options on the private rental market,&#8221; he said.

Three 172nd families are in hotels in Grafenw&#246;hr waiting to move into assigned homes, while 41 families assigned to private rental or government-controlled quarters are looking for other housing, he said. But there&#8217;s no push to make families move too early, Zeilmann said.

&#8220;Arrangements have been made so that families can stay in Schweinfurt until their new housing in Grafenw&#246;hr can be signed over to them,&#8221; he said, adding that the garrison has already housed 183 families and hundreds of single soldiers from Schweinfurt.

However, the 172nd spouse said two private rental apartments that the Housing Office showed her were not acceptable.

&#8220;One of them gave a whole new meaning to the term &#8216;unfurnished.&#8217; There were wires hanging out of the wall where light switches and outlets should be and in the kitchen there were two half-inch pipes coming out of the wall with rags stuffed in them,&#8221; she said.

Another 172nd spouse, who also asked to remain anonymous, said her family was told to leave their two-bedroom apartment near Schweinfurt for Grafenw&#246;hr by next week.

While not able to address what the spouse was told, Zeilmann said giving smaller families three-bedrooms homes isn&#8217;t really an option.

&#8220;Because it is anticipated that large numbers of soldiers and their families (will) be needing three-bedroom housing in Grafenw&#246;hr this summer, people requiring two bedrooms will not be assigned three-bedroom government units at this time,&#8221; he said.