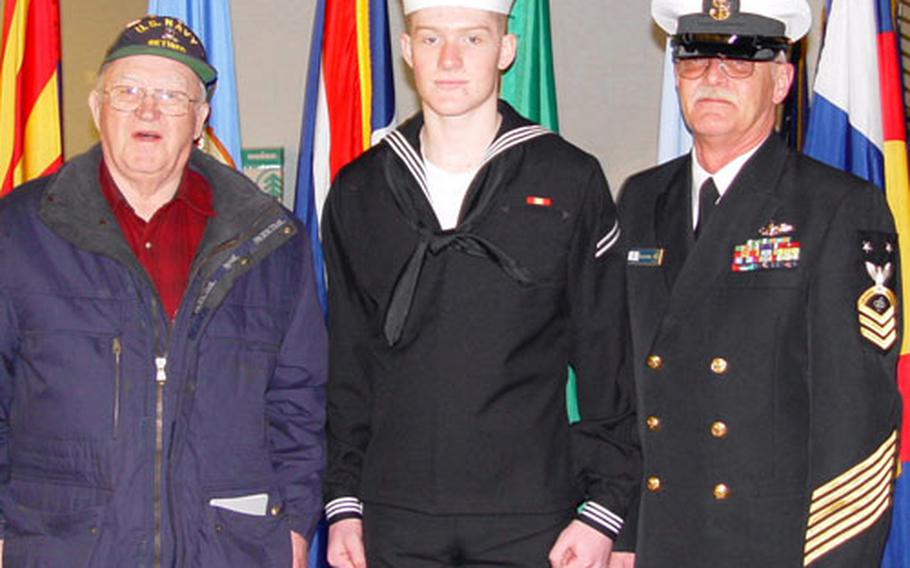 Seaman Jack Valentine, posing with his grandfather Bernard DeVries and dad, David Valentine, was killed after steam leaked into the USS Frank Cable’s fire room. His mother, Colleen Valentine, said the ship’s captain told the families that Valentine and seven other sailors injured in the incident shut down equipment before attempting to escape. (Photo courtesy of Colleen Valentine)

ARLINGTON, Va. &#8212; When pressurized, scalding steam escaped into the fire room of the USS Frank Cable, crewmembers in the affected area stayed at their post, the mother of one of those sailors said Wednesday.

&#8220;The captain of the ship had a video conference with the families, and he said all of them in their compartment took the time to shut down the equipment before they left the space, preventing further damage to the ship or injuries to others on the ship,&#8221; said Colleen Valentine.

Her son, Seaman Jack Valentine, 20, died Dec. 7 at Brooke Army Medical Center in Texas from injuries sustained in the incident. Of the seven other sailors injured, three remain in critical condition.

Colleen Valentine, of Zion, Ill., said her son was very intelligent but also knew how to have fun.

She recalled how when he was growing up, Jack went to the house of a friend, whose mother later got a phone call: &#8220;Do you know you have two boys sledding off the garage roof?&#8221;

Sykes said that later in life, Jack Valentine would serve aboard the USS Frank Cable with another of her sons, Lester James III, who now is escorting the fallen sailor&#8217;s body home.

While her son may not have been on the ship at the time of the steam leak, she said, she takes solace from Jack Valentine&#8217;s actions.

Colleen Valentine said she is proud of what her son did during the steam leak. Asked if he acted as she expected, she said, &#8220;Yes, absolutely.&#8221;

&#8220;Anything I say is going to sound like a mother bragging about her son,&#8221; she said. &#8220;What I would like to include: A total number of eight men were injured in that incident. Some of them are in serious condition. I would like people to continue to have them in their thoughts and prayers.&#8221;