Families split for the holidays as dependents flee typhoon-stricken Guam 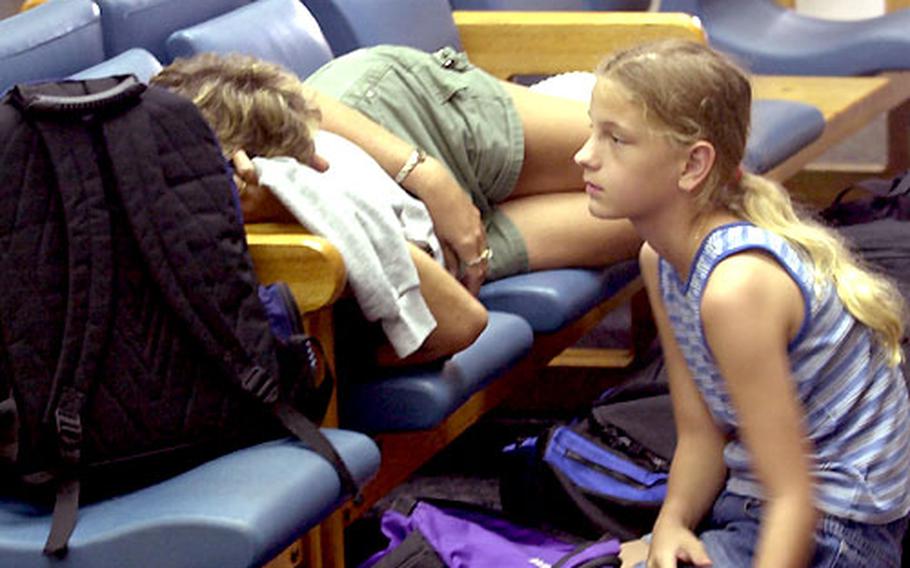 Stormy Hollandsworth, 10, and her mother, Sherry Hurst-Perry, wait at Guam’s Andersen Air Force Base for a space-available flight Sunday from Guam to California, where they planned to continue to Ohio to visit family while Guam recovers from typhoon damage. (Jason Carter / S&S)

Stormy Hollandsworth, 10, and her mother, Sherry Hurst-Perry, wait at Guam’s Andersen Air Force Base for a space-available flight Sunday from Guam to California, where they planned to continue to Ohio to visit family while Guam recovers from typhoon damage. (Jason Carter / S&S) 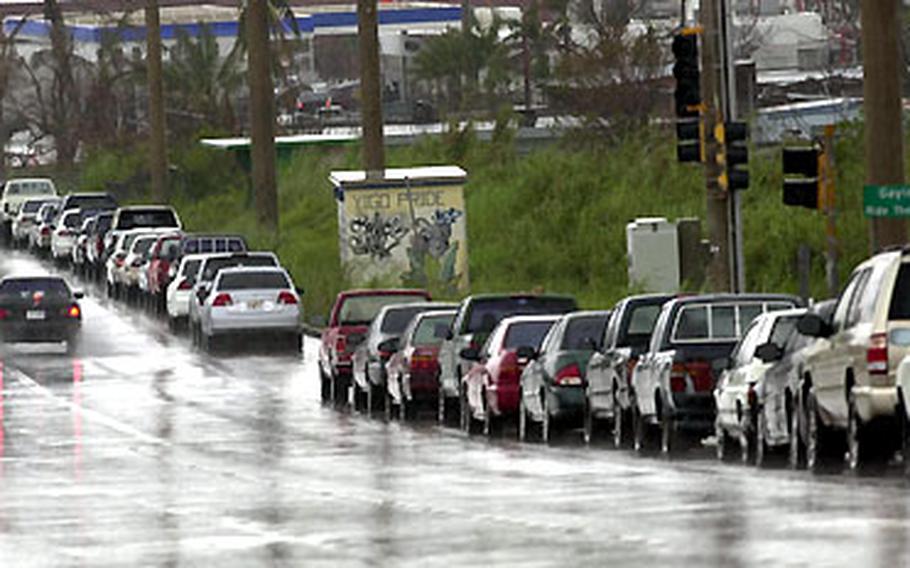 The line for gasoline on typhoon-ravaged Guam stretched for more than a mile Sunday after the government announced the pumps would open at 4 p.m. that day. (Jason Carter / S&S)

ANDERSEN AIR FORCE BASE, Guam &#8212; Sherry Hurst-Perry is fleeing a tropical island with her daughter and a suitcase of dirty clothes.

Hurst-Perry, 39, and her daughter, Stormy Hollandsworth, 10, were waiting in Andersen&#8217;s passenger terminal Sunday afternoon for a space-available flight to Travis Air Force Base, Calif. Instead of Christmas in Guam with her husband, Hurst-Perry is going to spend the holidays with relatives in Ohio.

Paradise has been hell ever since Super Typhoon Pongsona ravaged the island Dec. 8.

Hurst-Perry said she and her daughter are tired of living in the dark without drinkable water and clean clothes at U.S. Naval Forces Marianas, which as of Monday still was on a boil-water notice and without electricity.

More than 300 people have hopped space-available flights to the States, Okinawa or Japan in the wake of the monster storm, said Erlinda Santos, 734th Air Mobility Squadron assistant transportation clerk.

Hurst-Perry&#8217;s sailor husband will stay behind because of his job, separating the family during the Christmas holiday for the first time. The separation, entailing hotel stays and a commercial flight to Ohio, also could be costly.

The largest influx of dependents left Friday, when 152 space-available seats were taken, said Santos, but family members have left every day from Andersen since Dec. 11. Military planes dropping off relief supplies at Andersen regularly turn back with passengers instead of cargo.

Guam slowly is starting to rebuild since Pongsona, but no one is certain when power will be restored.

Power at some essential off-base facilities, such as Guam Memorial Hospital, was to be back on Sunday, said Guam Gov. Carl Gutierrez. Power to the rest of Guam, including the island&#8217;s three U.S. military installations, will be returned in increments, he said.

Also Sunday, three service stations off base opened to the general public after trucks delivered fuel. Cars began lining up Sunday morning, after Gutierrez announced some stations would open at 4 p.m. Purchases were limited to $10 for standard cars and $20 for SUVs &#8212; by early afternoon, vehicles had queued for more than two miles.

At Andersen, 36th Security Forces Squadron cops pumped gas at the AAFES station for customers with a 5-gallon coupon.

Commanders and first sergeants distributed the coupons to servicemembers and families on a priority and as-needed basis. A sign outside the station read, &#8220;Mission-essential personnel only.&#8221;

&#8220;Most people are coming here for generators rather than vehicles,&#8221; Olivarez said.

AAFES gas station and car-care manager Joanne Borja said Mobil was supposed to deliver fuel Monday, but she was uncertain when the station would open to everybody.

The station has lost an estimated $50,000 from the fuel shortage, she said.

Gayle Blue-Keyes, a civilian security specialist at Andersen, turned in her first 5-gallon coupon Sunday. She gassed up her car, which was down to about an eighth of a tank.

She wasn&#8217;t as desperate for fuel as some Andersen workers who live off base, but she needed the coupon, she said.