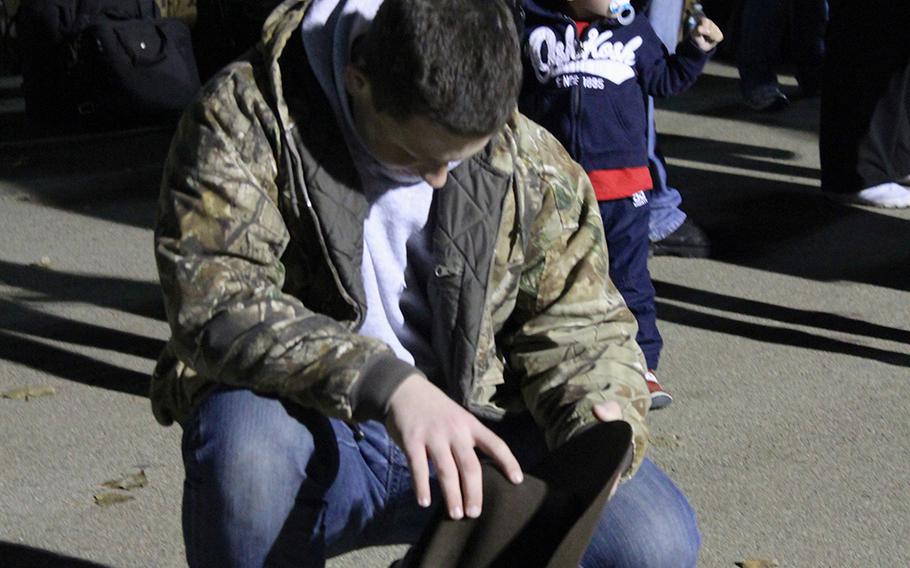 Daniel Hunt, 15, prays while waiting for his father, Cmdr. Thomas Hunt, to board a bus for a yearlong deployment to Afghanistan. The elder Hunt is a chaplain with I Marine Expeditionary Unit (Forward). (Jennifer Hlad/Stars and Stripes)

Daniel Hunt, 15, prays while waiting for his father, Cmdr. Thomas Hunt, to board a bus for a yearlong deployment to Afghanistan. The elder Hunt is a chaplain with I Marine Expeditionary Unit (Forward). (Jennifer Hlad/Stars and Stripes) 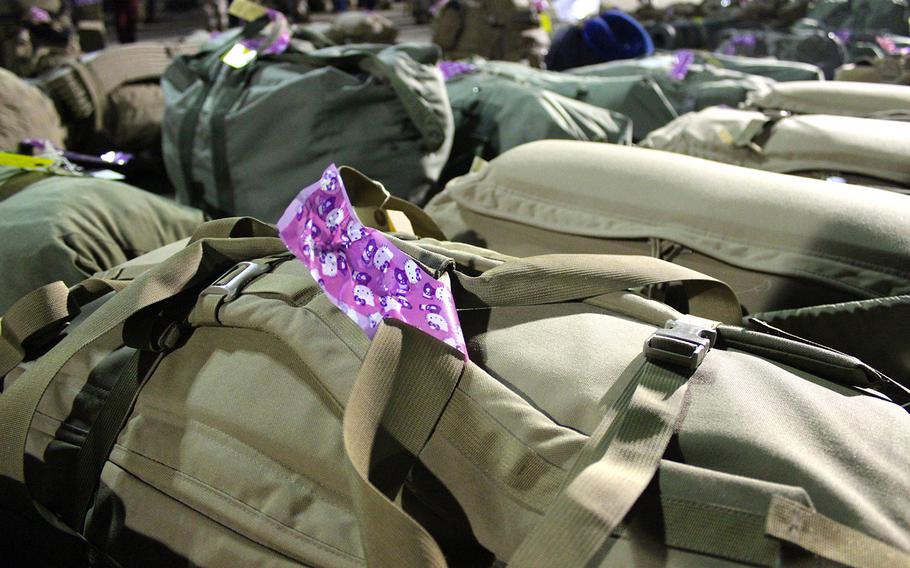 Marines with the Operations Coordination Center, which left Camp Pendleton, Calif., Monday morning for Afghanistan, marked their bags with Hello Kitty tape so they will be able to spot them. The unit is going to Afghanistan as part of I Marine Expeditionary Force (Forward) and the Marines will advise Afghan forces during their tour. (Jennifer Hlad/Stars and Stripes) 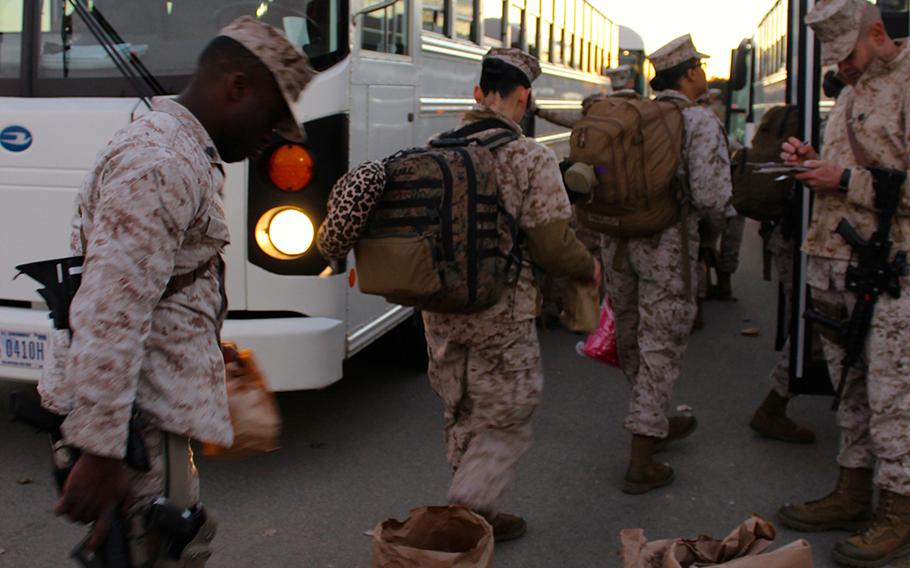 Sgt. Wes Gregory picks up some food to take with him as he travels from Camp Pendleton, Calif., to Camp Leatherneck in Helmand province, Afghanistan. Gregory is part of the Operations Coordination Center, and he will serve as an advisor for Afghan forces. (Jennifer Hlad/Stars and Stripes) 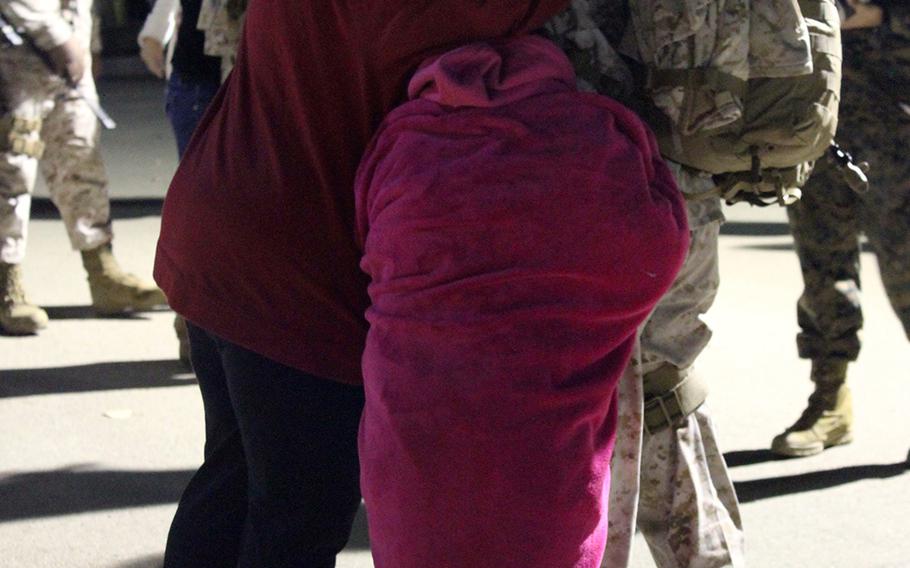 Maj. Erich Schloegel hugs his wife, Christa, and daughters Lily (in pink blanket) and Emme goodbye at Camp Pendleton, Calif., before leaving for a yearlong deployment to Afghanistan with I Marine Expeditionary Unit (Forward). (Jennifer Hlad/Stars and Stripes) 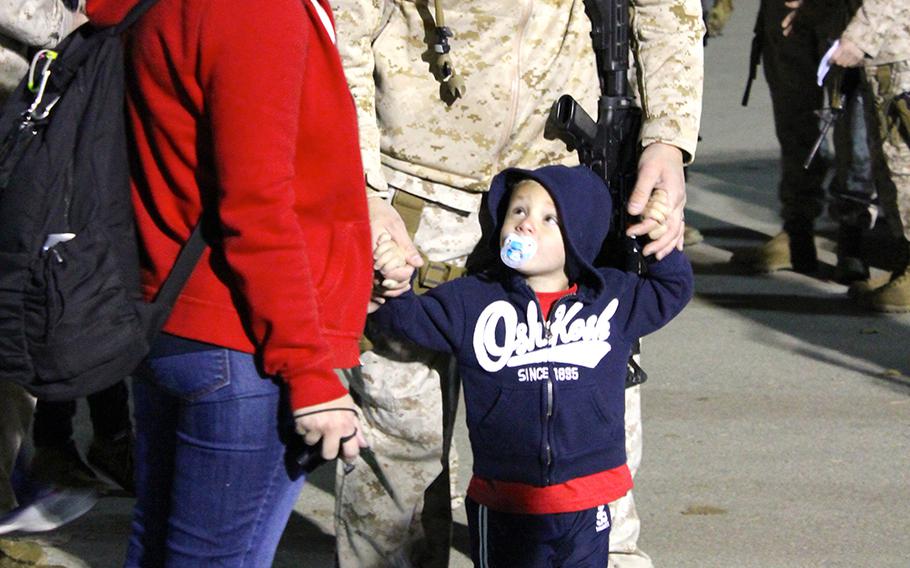 2nd Lt. Patrick Fedak spends a few minutes with his wife, Christi, and his 3-year-old son, Austin, before leaving for a yearlong deployment to Afghanistan with I Marine Expeditionary Force (Forward). Fedak deployed several times as an enlisted Marine, but this will be his first deployment since Austin was born. (Jennifer Hlad/Stars and Stripes) 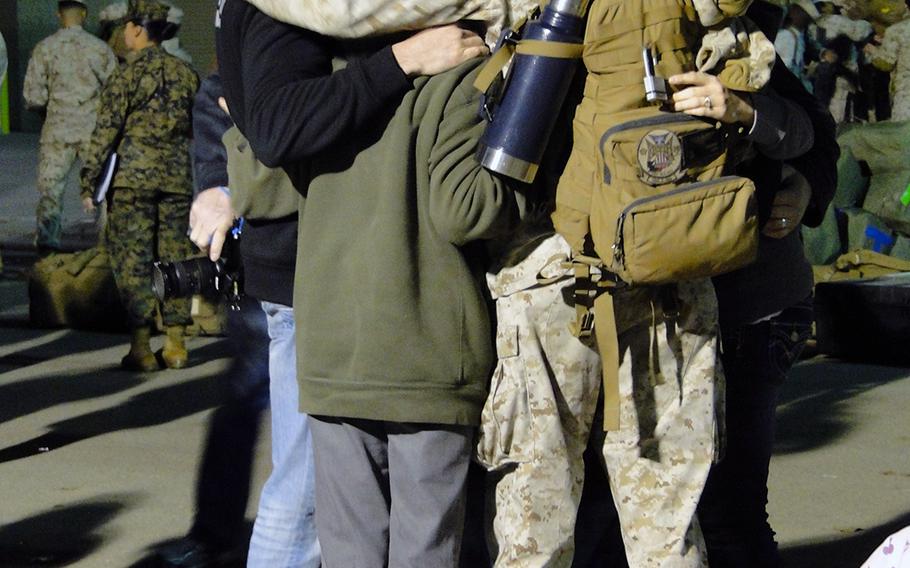 A family embraces their Marine at Camp Pendleton, Calif., Monday morning, before he leaves for a yearlong deployment with I Marine Expeditionary Force (Forward). (Jennifer Hlad/Stars and Stripes)

MARINE CORPS BASE CAMP PENDLETON, Calif. — Cpl. Michael Nelson wanted to join the Marine Corps from a young age, and he always assumed he would deploy to Afghanistan.

But on Monday morning, it was Nelson’s wife, Lance Cpl. Samantha Gullatta, who got on the bus for a yearlong deployment in Helmand province, while Nelson waved goodbye.

“It’s an eye-opener,” Nelson said. “It’s just different looking at it this way.”

I Marine Expeditionary Force (Forward) will soon take command of Regional Command - Southwest, based at Camp Leatherneck. The unit will be the last major Marine command to deploy to Afghanistan. It will focus on getting equipment and people out of Afghanistan safely, and help make sure the April presidential elections and political transition go smoothly.

Daniel Hunt, 15, said he arrived at the dark parking lot at 2 a.m. Monday to spend time with his father, I MEF (Fwd)’s chaplain. This is the fifth deployment Cmdr. Thomas Hunt of Daniel’s life, but the teenager said it never gets any easier.

Christa Schloegel also has been through several deployments in 19 years with her husband, Maj. Erich Schloegel. But, the last time he left, his oldest daughter was just 5. This time, she’s 13.

“I remember him leaving,” Emme said as she huddled in the morning chill with her mom and 8-year-old sister, Lily. “I thought he wouldn’t deploy anymore.”

Christa Schloegel said she was happy that the family was able to spend time together during the holidays, and while they hate to see him leave, they will do their part to make sure everything at home is taken care of.

“You can’t give up your security,” he said. “It is still dangerous.”

Many of the roughly 140 Marines who left Monday morning are part of I MEF (Fwd)’s command element. But Sgt. Wes Gregory is part of the Operations Coordination Center, which falls under I MEF (Fwd) but will advise Afghan forces while he’s in the country.

Gregory previously deployed to Afghanistan as an adviser in 2012, and stayed 6 months longer than he had originally planned because he enjoyed it so much.

Gregory was in Afghanistan when insider attacks were at an all-time high, but he said the Afghans who were members of his team were wonderful and made sure to take care of the Marines — even walking them to their vehicles to ensure their safety.

Afghan forces are now in the lead for the overwhelming majority of operations and military in the country, but the Marines can still help, Gregory said.

“We’re like the little birdie in their ear, to guide them in the right direction.”