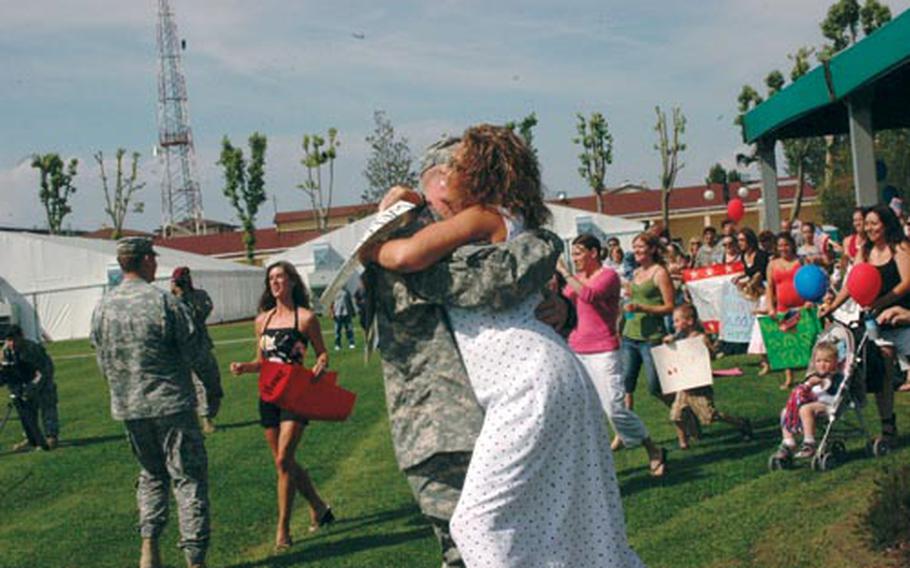 Jenna Ward led the pack of eager spouses who ran out onto field at Caserma Ederle in Vicenza to meet their husbands, who returned Thursday afternoon from a 13-month deployment to Afghanistan. (Sandra Jontz / S&S)

Jenna Ward led the pack of eager spouses who ran out onto field at Caserma Ederle in Vicenza to meet their husbands, who returned Thursday afternoon from a 13-month deployment to Afghanistan. (Sandra Jontz / S&S) 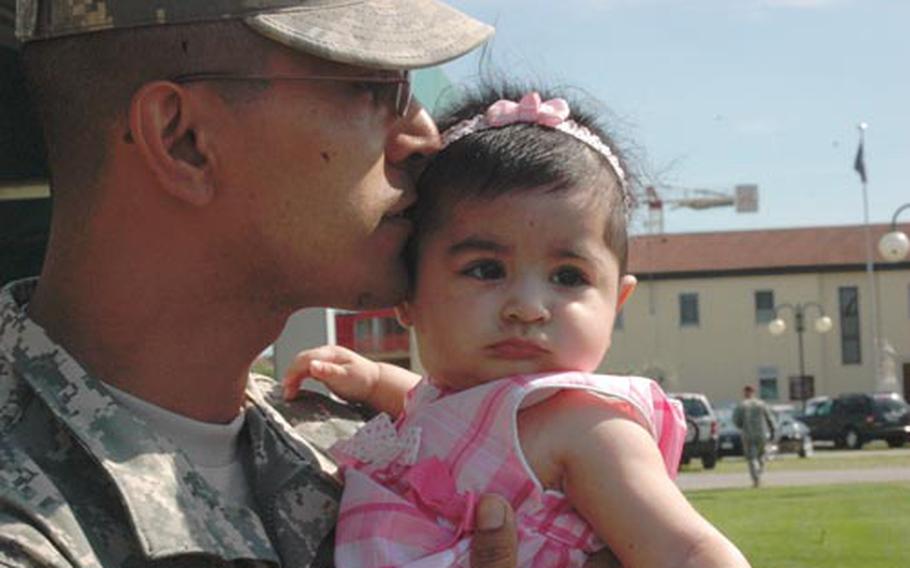 Staff Sgt. Francisco Lopez, with Company A, 2nd Battalion, 503rd Infantry Regiment, 173rd Airborne Brigade Combat Team kisses his 6-month-old daughter, Milana, who barely fit in both of his hands last time he saw her five months ago. Lopez and roughly 50 soldiers from the 173rd returned to Caserma Ederle, in Vicenza, on Thursday after a deployment to Afghanistan. (Sandra Jontz / S&S) 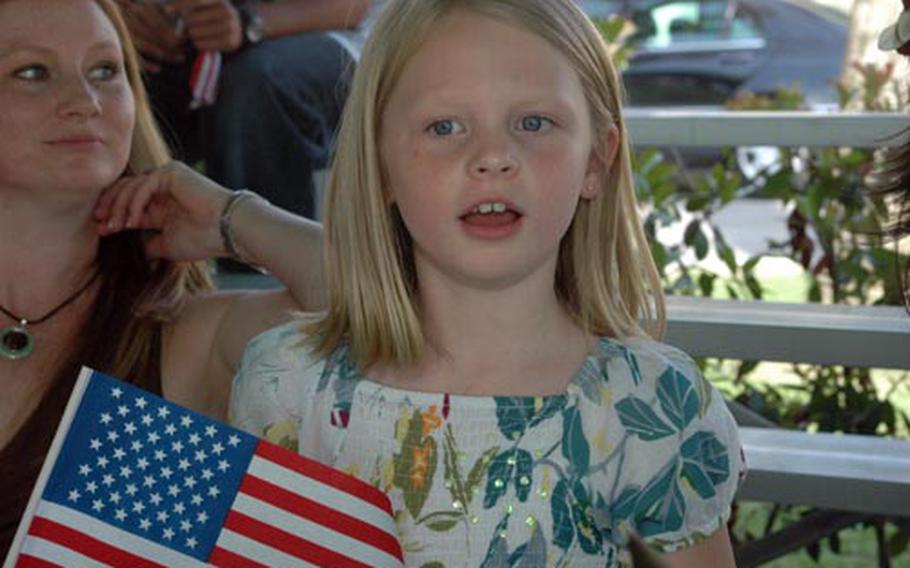 Isabel Fugman, 7, got excited when she heard the sirens of a fire engine that sounded the return of about 50 soldiers from the 173rd Airborne Brigade Combat Team on Thursday to Caserma Ederle in Vicenza – though her mother had not told her that her dad would be among the soldiers returning from Afghanistan. (Sandra Jontz / S&S)

In all the excitement of getting ready for her husband&#8217;s return from war Thursday, Belinda Lopez forgot to turn on the oven and throw in the brisket she&#8217;d planned for the welcome-home dinner for her husband and several soldiers who would dine with the family.

Under clear-blue skies, roughly 50 soldiers of the advance party from various battalions of the 173rd Airborne Brigade Combat Team returned home to Caserma Ederle. After 13 months in Afghanistan, they were greeted by the cheers of spouses and children. Over the next two months, about 3,500 of the 173rd "Sky Soldiers" are set to return to Vicenza, Italy, and bases in Bamberg and Schweinfurt, both in Germany.

But she and daughter Adriana Almodova, 12, wondered what will husband and daddy Staff Sgt. Francisco Lopez be like when he gets home. Will he be withdrawn, testy, irritable?

In school, Adriana listened to counselors who explained the mood swings that can afflict soldiers returning from war.

The Lopez family has been through deployments before. In fact, this is their third time.

She tells the not-so-seasoned spouses to be patient with their deployed husbands, to cherish the moments when they get a chance to talk on the phone and not to argue about the little things.

Thursday was also a special day for Jenna Ward and her husband, Staff Sgt. Gerald Ward. Not only because Gerald Ward returned home, but because the couple will be together on their anniversary for the first time in their three-year marriage.

In fact, in the three years they&#8217;ve been married, they&#8217;ve actually spent only about eight months together being able to hold each other&#8217;s hands, to talk face to face, to kiss, they said.

"And now he&#8217;s home," said Jenna Ward, a former soldier who met her husband when they both were stationed at Fort Campbell, Ky. "I got out to be a wife, and this is much harder.

"The last 13 months have been nerve-wracking and stressful. That pretty much sums it up."

The minute the soldiers received the order to "fall out" from formation, Gerald Ward made a beeline to his wife.

"I&#8217;m glad to be here," he said when he finally released his embrace on Jenna. "I know this deployment has been harder on her. &#8230; I tried to work a lot and tried to keep my mind on other things than being apart."

And he remembered the upcoming anniversary, for which all he wanted was a peach cobbler.