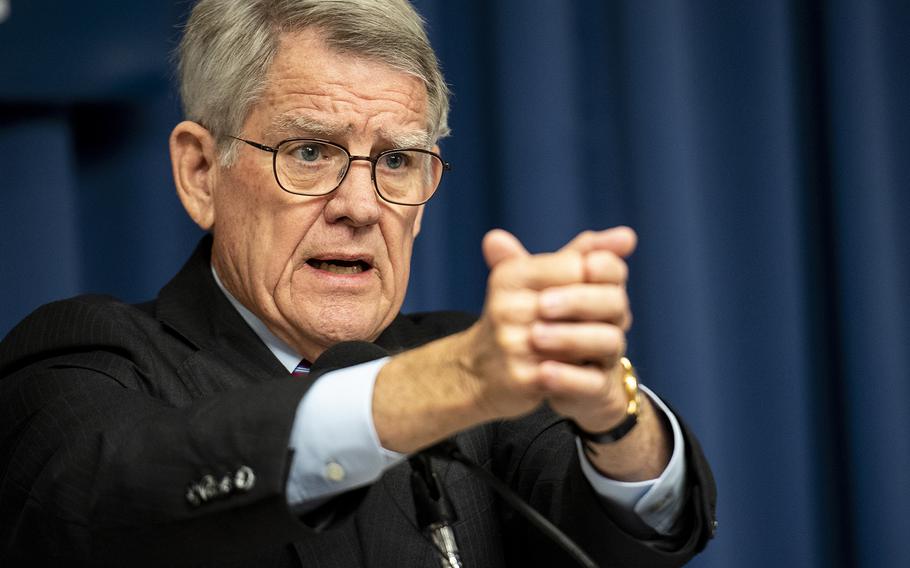 Buy Photo
James Moriarty, the father of Staff Sgt. Jimmy Moriarty, who was one of three Army Green Berets slain by a Jordanian soldier in November of 2016, shows the final actions of his son, firing his pistol in self defense during the attack. Moriarty and the families of the other fallen soldiers on Friday, Nov. 16, 2018 filed a lawsuit against the Kingdom of Jordan seeking damages for the wrongful deaths of their sons and attempting to cover up the incident. (Corey Dickstein/Stars and Stripes)

Buy Photo
James Moriarty, the father of Staff Sgt. Jimmy Moriarty, who was one of three Army Green Berets slain by a Jordanian soldier in November of 2016, shows the final actions of his son, firing his pistol in self defense during the attack. Moriarty and the families of the other fallen soldiers on Friday, Nov. 16, 2018 filed a lawsuit against the Kingdom of Jordan seeking damages for the wrongful deaths of their sons and attempting to cover up the incident. (Corey Dickstein/Stars and Stripes) 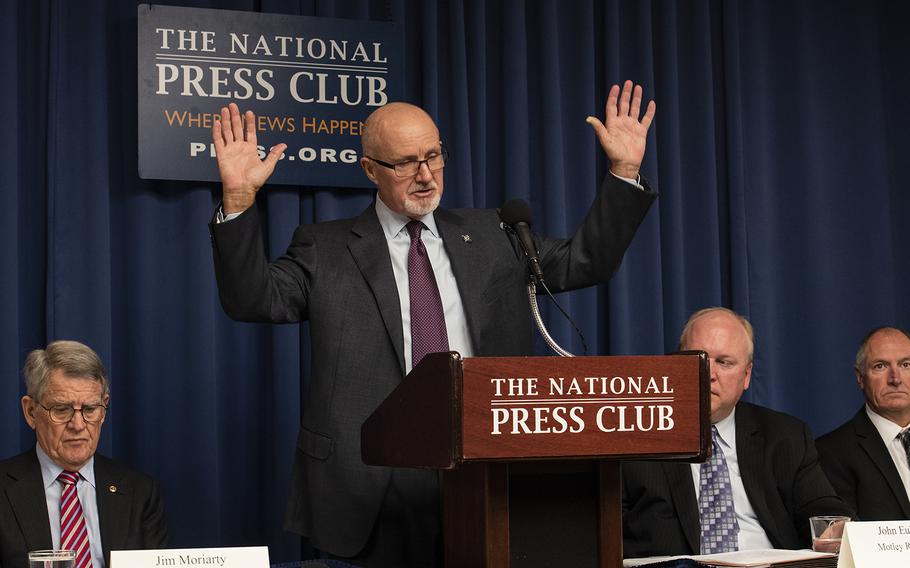 Buy Photo
Brian McEnroe, the father of slain Green Beret Staff Sgt. Kevin McEnroe, on Friday, Nov. 16, 2018 shows how his son placed his hands up as a Jordanian soldier attacked him in November of 2016. Staff Sgt. McEnroe and two other Special Forces soldiers were killed in the attack. The families of the soldiers on Frida filed a lawsuit against the Kingdom of Jordan seeking damages for the wrongful deaths of their sons and attempting to cover up the incident. (Corey Dickstein/Stars and Stripes) 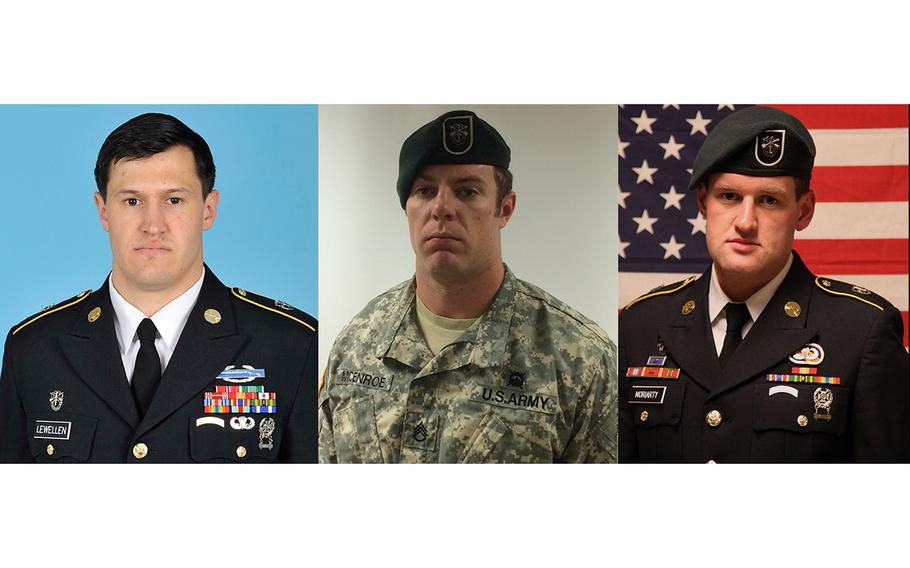 WASHINGTON — The families of three Green Berets killed by a member of the Jordanian Air Force as they entered a base in Jordan filed a lawsuit against that country’s government, charging it attempted to cover up the incident and slander their fallen sons.

The lawsuit filed in U.S. District Court in Washington seeks monetary damages from the Kingdom of Jordan, where the Special Forces soldiers were stationed when they were gunned down Nov. 4, 2016 by Jordanian Air Force 1st Sgt. Maarik al-Tawayha. The Green Berets – Staff Sgts. Matt Lewellen, Kevin McEnroe and Jimmy Moriarty – were driving onto King Faisal Air Base in southern Jordan midday after training Syrian rebel forces when al-Tawayha inexplicably opened fire on them.

“Their families seek justice for their unnecessary deaths and believe that the Hashemite Kingdom of Jordan aided and abetted this terrorist act by seeking to silence the families and hiding behind the defense that the Jordanian soldier who hunted down and brutally murdered their loved ones was acting within the internationally accepted rules of engagement,” the lawsuit reads. It does not seek a specific amount of money, leaving that determination to a judge, said John Eubanks, a lawyer with the firm Motley Rice, which brought the suit.

Though al-Tawayha was charged with their murders months after the attack and in July 2017 was sentenced to life in prison, the fathers of the slain soldiers told reporters in Washington on Friday that it was not enough. The convicted killer never revealed his motivation for the attacks, claiming he acted on orders and believed the base was under attack.

The families alleged the government of Jordan, a key U.S. ally, quickly began a campaign to blame the American soldiers for the incident, initially telling their state news organization that the Green Berets failed to follow protocol to enter the base. Later, the families charge, the Jordanian government launched a “whisper campaign” accusing Lewellen, McEnroe and Moriarty of being intoxicated when they attempted to enter the base and also accused them of accidentally discharging a firearm inside their vehicle, prompting the shooting.

All of those claims, which were reported in local media, would be disproved as the Jordanians, the U.S. Army and the FBI launched separate investigations into the deadly encounter. Brian McEnroe, the father of Kevin McEnroe, said Friday that the families learned in March 2017 that all of those claims had been proven false.

Video of the seven-minute encounter, which was eventually released by the Jordanian government under pressure by American media organizations, proved a gun was not discharged and the Green Berets followed proper instructions to enter the base, McEnroe said. Additionally, autopsies proved none of the three fallen soldiers were under the influence of any intoxicants at the time.

The families never received any apology or explanation of the false charges levied against their sons from the Jordanian government, McEnroe said.

“The King of Jordan should be advised that the show trial and the insufficient punishment of [al-Tawayha] will never right the wrong the Kingdom of Jordan has perpetuated in these ruthless killings and their subsequent propaganda campaign to assign blame to the victims,” McEnroe said. He said al-Tawayha was likely to spend only about 15 years in prison, calling his punishment “ludicrous.”

He and James Moriarty, the father of Jimmy Moriarty, called on the United States to re-examine its longstanding relationship with Jordan, and compared the alleged cover-up attempt of their sons’ killings to Saudi Arabia’s recent attempts to hide details of the high-profile murder of journalist Jamal Khashoggi.

Neither the governments of Jordan nor of Saudi Arabia are likely to ever admit exactly what happened and take responsibility, Moriarty said.

Receiving money from the lawsuit will not replace their sons, the fathers of each of the slain Green Berets said. They hope legal action will serve as a vehicle for further searches for the truth about why their children were murdered, unprovoked in a country where the United States is not at war.

“There’s no amount of money that can take the place of my son, Jimmy,” Moriarty, a Texas lawyer and Marine Corps veteran, said Friday. “… But, we want to know if there is anything else out there, any clues as to why that Jordanian soldier targeted our sons that day.”