Families in the Pacific often take advantage of cultural opportunity 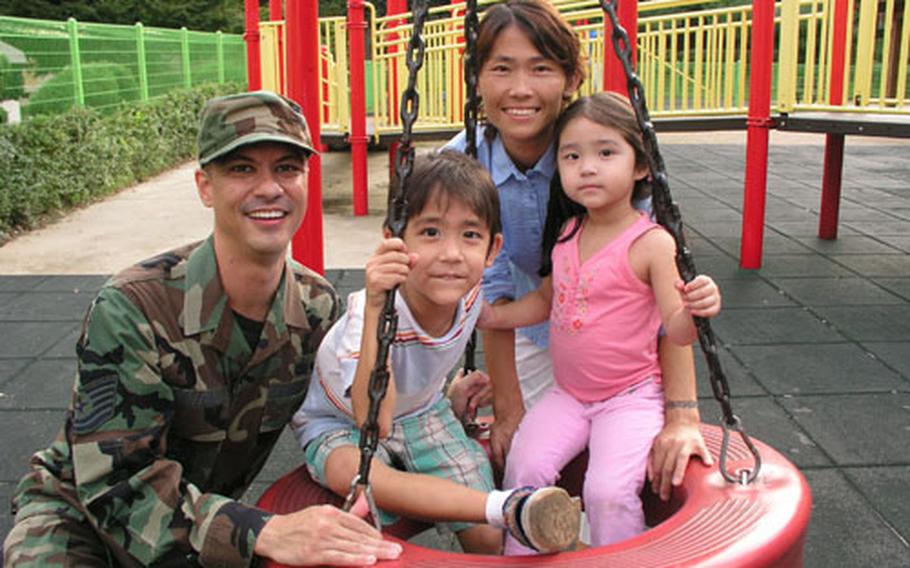 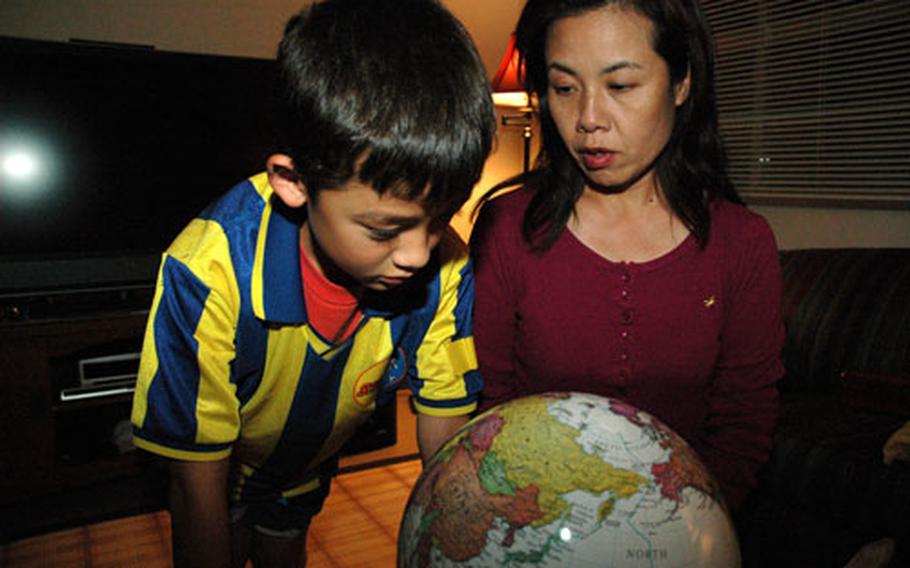 Luke Ruby, 9, and his mother, Hiroe Ruby, use a computerized globe to study about different countries around the world. Hiroe is Japanese and Luke&#39;s father, Gunnery Sgt. Troy Ruby, is American. Luke has gone to a mixture of Japanese and American schools, and this year he&#39;s in fourth grade at MC Perry Elementary School at Marine Corps Air Station Iwakuni. (Teri Weaver / S&S)

Neither did Tateishi. That&#8217;s one of the main reasons he and his South Korean wife, Mihwa, are raising their daughter and son with both English and South Korean languages.

He said it&#8217;s OK if his children eventually decide they prefer one language over the other.

Many parents take the same approach when it comes to teaching children two or more languages. As American troops travel and live across the world, many families begin to reflect that cultural mix. Often, that means children grow up speaking a variety of tongues.

Parents and educators say there are many advantages to teaching children more than one language. Speaking multiple languages can provide career opportunities, and having a child who speaks a second language can prove handy as the family moves around the world, they say.

Mostly, however, military families in South Korea and Japan said language provides a direct link to their families&#8217; diverse cultures. Learning the words of both parents helps children connect to their own histories.

&#8220;My mother never gave up the Japanese portion of my life,&#8221; said Tani Butler, who grew up in a bilingual home in Iwakuni, Japan, and now is an assistant manager at Navy Federal Credit Union on the Marine Corps Air Station. &#8220;I feel privileged to be able to have two cultures.&#8221;

There can be hiccups along the way. At first, a baby may be slow to talk, and an older child&#8217;s verbal skills can often exceed written ones. Teaching a child a second writing system, such as Korean hangul or Japanese kanji, takes dedication and sometimes money spent on tutors.

Along the way, children inevitably will find their own voice. Sometimes that won&#8217;t include all of the languages that mom and dad were counting on.

The Tateishis already are experiencing this.

Ian, 5, has stopped speaking Korean. His parents don&#8217;t know if it&#8217;s permanent or just a growing boy asserting his independence. They&#8217;ve decided not to push him one way or another.

Ian, for his part, seems comfortable with the arrangement. He understands everything his mom and sister, 3-year-old Erica, say. Erica relies more on Korean. She spends more time with Mihwa, a stay-at-home mom, and she recently attended a Korean preschool.

Mike, like many parents, uses his son as a translator, even at home. On a recent afternoon at their Osan home, Erica disappeared into the bathroom. After a few quiet minutes, Mihwa went looking for her. An eruption of disapproval &#8212; in Korean &#8212; followed.

Schools and activities deserve careful consideration for developing both social and language skills in different cultures, some parents said.

Army Sgt. 1st Class Paul Lancaster said he and his wife, Unyong, sent their daughter Angie to South Korean preschool, in part for language and in part because it was cheaper than on-base rates.

This year, Angie, 5, is going to on-base school, said Lancaster, who is stationed at Camp Walker with the 36th Signal Battalion, 1st Signal Brigade.

The change has been seamless, he said.

Often, however, spoken skills outweigh written or academic ones in the same language. But in many cases, patience and encouragement can help a child catch up as time goes on.

Luke Ruby is 9, and he&#8217;s been to Japanese preschool in Okinawa, American elementary school in Syracuse, N.Y., and this month started fourth grade at M.C. Perry Elementary School at Iwakuni.

Along the way, he skipped a grade because in many ways he was ahead of his peers, according to his parents, Gunnery Sgt. Troy and Hiroe Ruby.

But during the first week of school, Luke could spell only five words on his English vocabulary list. &#8220;It upset him,&#8221; said his dad.

His parents talk often with Luke about his language skills, his varied schooling and the cultural differences between American and Japanese classrooms. They are encouraging him to keep trying, and they work with him at night. He also continues to play soccer in a Japanese club to strengthen off-base friendships.

Missy Gingrich, foreign language programs director for the Department of Defense Dependents Schools in the Pacific, says children like Luke usually catch up quickly. She said part of her job is to help teachers understand the students might need a little more time to comprehend directions or improve their written skills.

The dual-language approach can be hard for parents, too. The Rubys haven&#8217;t decided yet whether Luke will stay in the American schools throughout his education. They want to see how this school year goes.

But Troy and Hiroe are honest about what each wants, and it doesn&#8217;t match. Troy would rather see his son in an American school; Hiroe much prefers the Japanese system she grew up in. In the long run, they want what is best for Luke and for him to appreciate his own background.

Switching from one language to another never bothered Tani Butler, an assistant manager at Navy Federal Credit Union at Marine Corps Air Station Iwakuni in Japan.

Her first language was Japanese, but she attended on-base schools. She continued to speak Japanese to her mother and friends, and she kept up with written Japanese by working with her mother and reading comic books.

That normal flowing of languages has a scientific explanation.

A newborn&#8217;s brain is still developing, and that ongoing construction means babies have twice as many synapses &#8212; or neural connections &#8212; as adults, according to the Multilingual Children&#8217;s Association in California.

A baby also is acutely aware of sounds and can hear the nuances between tones and pronunciations lost on grown-up ears, the association&#8217;s Web site explains.

All this means a young child has a sponge-like ability &#8212; physically and mentally &#8212; to learn various languages, association founder Christina Bosemark said in an interview. Add that quality to the developing muscles in the face and tongue and many children learn perfect pronunciation, as well.

&#8220;The younger they start, the easier it is for them,&#8221; said Missy Gingrich, foreign language programs director for the Department of Defense Dependents Schools in the Pacific. And people who speak multiple languages as a child find it easier to learn more languages later on, she added.

At DODDS, the staff and curriculum encourage families to use more than one language at home. The schools also offer counseling and classroom support to help students catch up in English if needed, Gingrich said.

Mastering a foreign language can pay off in the real world

Immersion available in schools off base