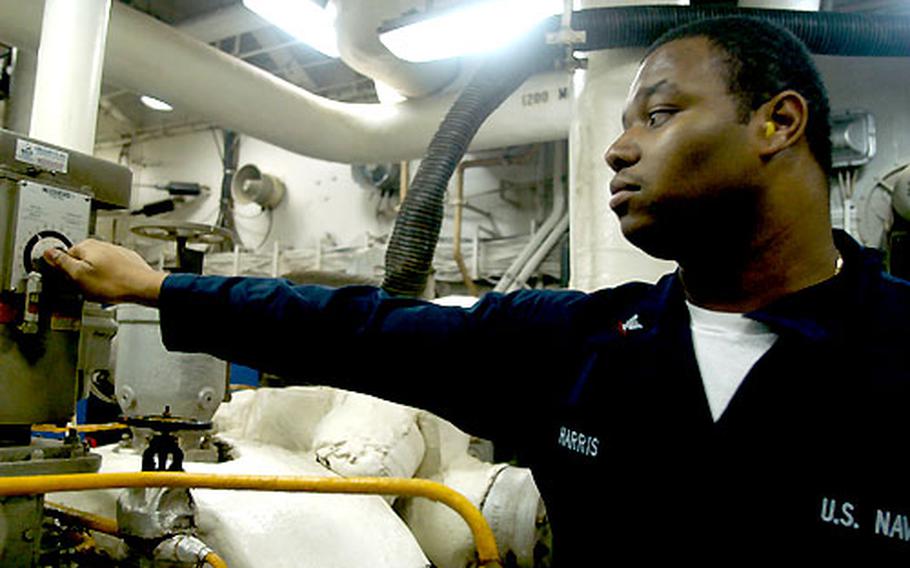 As news of the USS Kitty Hawk&#8217;s impending departure from the Persian Gulf spread across its home port of Yokosuka Naval Base this weekend, excited families and friends began making plans for the crew&#8217;s raucous welcome home.

&#8220;We&#8217;ve been through so many deployments before, and this one was actually shorter than we thought it would be. I know my boys are really excited.&#8221;

The Kitty Hawk and several ships from its battle group set out Jan. 20 for what would become Operation Iraqi Freedom. On Sunday, the ship&#8217;s captain made the announcement over the intercom system, drawing a chorus of cheers.

The USS Cowpens and USS John S. McCain also have orders to return to Yokosuka. The return trip could take anywhere from two weeks to more than a month, officials have said.

Spouses like Astorga, facing a change of station move without her husband&#8217;s help, are particularly happy. The Astorgas are transferring to Hawaii.

By Monday morning, most families had heard the news, though military officials were hesitant to confirm it.

Yokosuka Navy officials said they have not planned the homecoming party yet, but it would surely be an event. After returning from recent routine deployments, the ship has been greeted by purposefully understated welcomes and even Japanese protesters outside the gate.

The news also was welcomed at Atsugi Naval Air Facility, where the carrier&#8217;s air wing is stationed.

Tina-Marie Pike heard the carrier might return in an e-mail from her husband, Presedencio Pike, an ordnanceman on the ship. But she thought it was just a rumor until reading about the return Monday morning.

Pike said she&#8217;ll plan a special dinner out for her husband when he returns.

Air wing leaders plan to hold a welcome-home ceremony on the base after the wing returns.

The Lincoln was relieved by the USS Nimitz. The Lincoln and its seven-ship battle group have been at sea nearly nine months, longer than any U.S. carrier group now on duty.