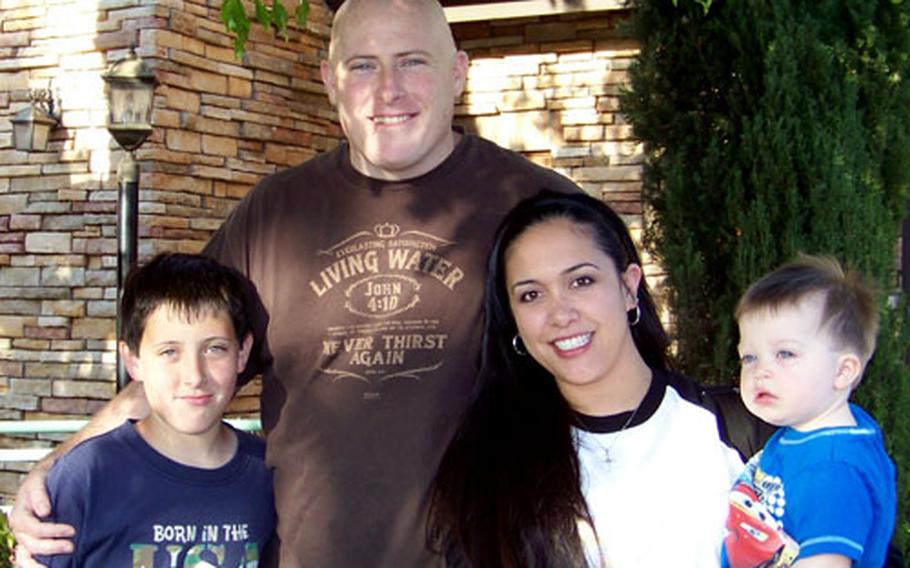 Army Staff Sgt. Matt Bumpus poses with family (wife Laura, sons Nate and Aaron). Bumpus died in August 2008 after a two-year battle with Acute Myeloid Leukemia, a rare and aggressive cancer his family believes was caused by exposure to burn pits during his year-long deployment in Iraq in 2003-2004. But military and veterans officials maintain there is no connection between the illness and his military service. (Courtesy of Laura Bumpus)

WASHINGTON &#8212; In 2004, Staff Sgt. Steven Ochs regularly inhaled toxic fumes from burn pits beside his base in Balad, Iraq. So did a colleague, Staff Sgt. Matt Bumpus.

In 2006, Ochs developed a rare, aggressive form of leukemia. So did Bumpus.

Defense and Veterans Affairs officials say that&#8217;s a coincidence. Pentagon health experts insist that burn pits overseas &#8212; used to dispose of trash, broken furniture, and even some excess combat equipment &#8212; do not pose a serious health risk to troops.

Bumpus&#8217; widow calls that &#8220;a slap in the face&#8221; to the families who have seen the effects firsthand. Family members say hundreds of other soldiers, some who served with Bumpus or Ochs and some who simply were stationed in other areas with burn pits, have developed rare cancers and chromosome mutations, all ailments linked to chemical exposures.

Veterans groups for months have lobbied the White House to investigate the potential chemical exposures from burn pits, noting that troops in Iraq and Afghanistan may still be exposed to toxic carcinogens on a daily basis.

On Friday, the Senate Democratic Policy Committee will hold a hearing on the issue, the latest in a chain of congressional investigations since this spring on bad allergies, persistent respiratory problems and fatal illnesses believed to be linked to the acrid smoke.

So far 22 class-action lawsuits related to burn pit illnesses have been filed in federal courts, covering both contractors and soldiers exposed to particulate matter from the pits. But in an emailed response to questions on Thursday, Dr. Craig Postlewaite, director of the Pentagon&#8217;s health protection programs, reiterated the Defense Department&#8217;s position that &#8220;only minor, temporary effects have been identified with the burn pit smoke.&#8221;

Pentagon physicians see no connection between the pits and more serious illnesses such as leukemia. Veterans Affairs officials do not recognize burn pit exposure as a presumed combat-connected illness.

But in August, President Barack Obama promised the issue would not become another &#8220;Agent Orange,&#8221; the name for herbicides used heavily during the Vietnam War and that were later linked to serious health problems in civilians and U.S. troops. Veterans groups have fought with military agencies for years over health benefits related to that chemical exposure.

Dr. Anthony Szema, an allergist and lead researcher on several studies related to the health effects of the World Trade Center collapse in 2001, has been tracking veterans respiratory illnesses for years, and challenged the Pentagon&#8217;s assertion that there are no long-term effects.

He said many serious cancers and lung deformities don&#8217;t manifest for up to five years after chemical exposure, less time than the Defense Department has been monitoring many of the pits. And Postlewaite admitted to lawmakers that they&#8217;ve collected 17,500 environmental samples in Iraq, Afghanistan and Kuwait, covering just a fraction of the population exposed to the burn pit fumes.

Postlewaite said that since no serious health problems have been linked with burn pit smoke, troops do not receive any specific warnings about them before deploying. All troops do receive a general briefing about the potential health effects of harsh environments and chemical exposure before deploying.

Laura Bumpus, whose family received no military or veterans benefits related to Matt&#8217;s death, said that&#8217;s not enough, since thousands more are still being put in harm&#8217;s way.

Ochs&#8217; sister, Stacy Pennington, said both her brother and Bumpus served around Balad in 2004. Both were in the middle of a yearlong deployment with their respective units, and neither had a history of cancer in their families.

Family members say both men worked near the base&#8217;s open-air burn pit, one of the largest in Iraq at the time and a site that the Air Force&#8217;s former bioenvironmental engineering flight commander called &#8220;an acute health hazard&#8221; in a 2006 memo.

&#8220;There is also the possibility for chronic health hazards associated with the smoke,&#8221; Lt. Col. Darrin Curtis wrote. &#8220;I am writing this memo to translate what I see is an operational health risk to those that have been, are now and will be deployed to Balad.&#8221;

Pennington said neither soldier was warned of any potential dangers. When her brother was diagnosed with leukemia a few years later, physicians told her that the illness had clear connections to toxic chemical exposure.

After his death, Pennington met Laura Bumpus while researching burn pits, and saw striking similarities in the two men&#8217;s stories. Since then, the pair have drawn connections to hundreds of others with similar tales. They say that points to an obvious conclusion: Burn pit smoke causes cancer.

Postlewaite said officials are conducting a health records review of all troops stationed at Joint Base Balad to research any evidence of recurring, serious health problems, and is sharing those results with veterans benefits officials in case any connection is found.

Meanwhile, Congress is considering legislation which would mandate alternatives to burn pits in combat zones and prohibit their use for medical and hazardous waste. But little movement has occurred on the measure since the summer.