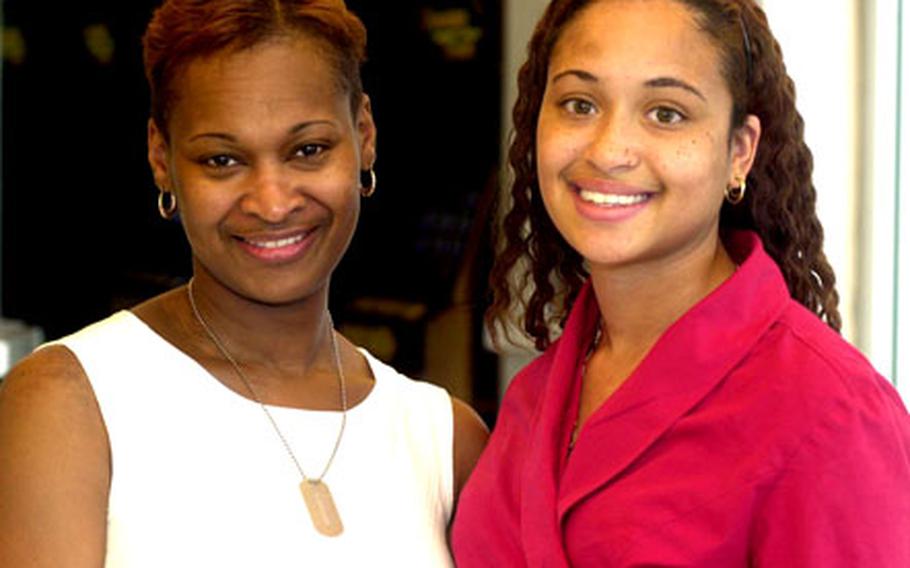 Nishonda James, left, and April Speight say Gen. B.B. Bell and his staff gave them a huge morale boost by helping with follow-on assignments after their husbands’ deployments to Iraq were extended in April. “They were awesome,” Speight said. “You could tell they cared as much as we did.” (Terry Boyd / S&S)

Nishonda James, left, and April Speight say Gen. B.B. Bell and his staff gave them a huge morale boost by helping with follow-on assignments after their husbands’ deployments to Iraq were extended in April. “They were awesome,” Speight said. “You could tell they cared as much as we did.” (Terry Boyd / S&S) 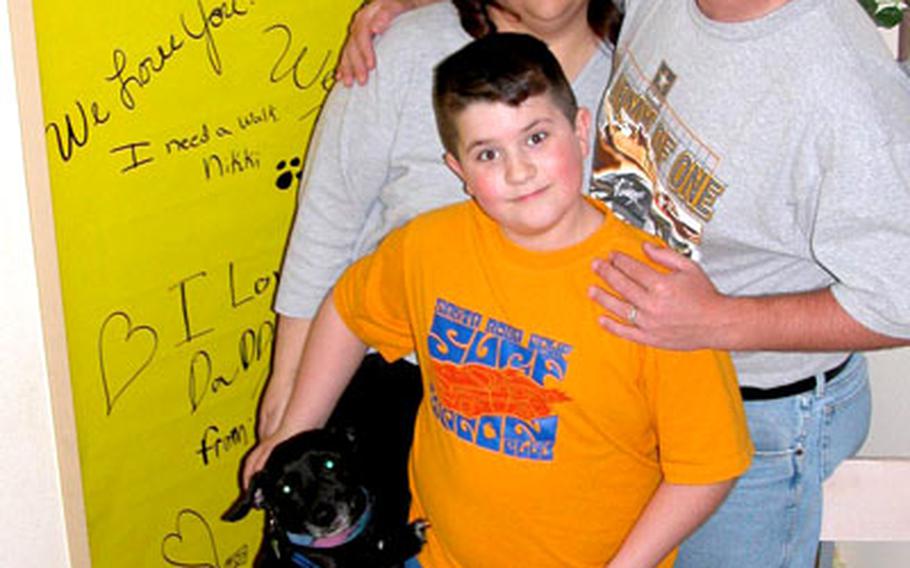 Cpl. Robert Harter of the 47th Forward Support Battalion in Baumholder, Germany, had been back from Iraq for just six days when he was told he&#39;d be going back down for another four months. But Harter said he was thankful that U.S. Army Europe allowed his wife, Betty, to change his follow-on assignment to Fort Irwin, Calif. Robert and Betty Harter are shown here with their 9-year-old son, John, and family dog, Nicky. (Charlie Coon / S&S)

But rather than broad, elemental changes in policy and regulations, it appears that Bell&#8217;s problem-solving tour of 1st AD bases across Germany in April was part local initiative and part evolution of a trend that began in the late 1980s.

Army officials realized the only way to keep soldiers is to take care of soldiers and families, said Wayne V. Hall, public affairs officer for Well-Being Liaison Office, part of the Pentagon. &#8220;(Family) well-being is the human dimension of Army readiness. It&#8217;s a direction the Army&#8217;s been headed in a while now.&#8221;

A commander&#8217;s ace in the hole is his authority to give exceptions to policy. Regulations are guidelines for a commander to follow using his professional judgment, Hall said. What has changed is a commander&#8217;s view of how Army needs and what benefits the soldier intersect, he said.

When Betty Harter tried to help her husband, Cpl. Robert Harter, change his next assignment while he was deployed with the 1st AD, it was an experience unlike any she had as a military spouse.

First, Bell and his staff came to Baumholder, where the Harters are based with the 47th Forward Support Battalion. Then Bell told the crowd at a meeting to contact him through his staff with any problems they were having.

In a matter of days, the Harters got their first choice &#8212; the National Training Center at Fort Irwin, Calif. &#8212; rather than Robert Harter&#8217;s original assignment to the 18th Airborne Corps at Fort Bragg, N.C. Betty Harter said she was amazed that when she e-mailed the general, Bell&#8217;s staff responded the next day.

Describing herself as an independent woman, Betty Harter said she found her first months as an Army wife &#8220;frustrating.&#8221; She remembers a time only a couple of years ago when spouses couldn&#8217;t even get their husbands&#8217; leave and earning statements. &#8220;Now we can get them online,&#8221; she said.

The Army is finally able to &#8220;empower spouses,&#8221; Robert Harter said, which makes being a deployed soldier much easier. It also made the decision to re-enlist much easier.

&#8220;We broke no regulations,&#8221; Frutiger said. &#8220;It was always about changing attitudes &#8230; about changing philosophy in dealing with day-to-day bureaucracy. We cut through the bureaucracy and in 99.9 percent of cases, we were able to give spouses what they wanted.&#8221;

That said, every one of the hundreds of cases was different, and luck sometimes played a role. For example, one spouse resigned her on-base job, thinking her family would be moving when her husband scheduled to return in April.

When she was told regulations prohibited her from returning to work after the extension was announced, Frutiger found her resignation hadn&#8217;t gone through the system. &#8220;It would have been tough for me to reverse that,&#8221; he said.

The fact that Frutiger and company were exploring every avenue won over a lot of 1st AD spouses.

In the end, a big morale booster was simply Bell and Frutiger&#8217;s style, Baumholder-based spouses said. &#8220;Anyone has anything bad to say about Gen. Bell, tell them to come talk to me,&#8221; Nishonda James said.

In James&#8217; case, 1st AD officials helped her change the next assignment for her husband, Staff Sgt. Ronald James, 47th FSB, who returned from Iraq on June 19.

Bell came into meetings with families and had staff members stand up and give out their e-mail addresses, inviting spouses to contract them directly about problems, said James and her friend April Speight. Speight&#8217;s husband, Cpl. Kenneth Speight, is also assigned to the 47th FSB.

Nishonda James and April Speight both said they were initially skeptical of Bell&#8217;s promises. But when Bell came to Baumholder with his entire staff, then followed up immediately, they were convinced.

Is it the harbinger of things to come? Yes, Frutiger said &#8212; as long as he has anything to do with it.