Famed pilot reunited with women who aided his WWII escape 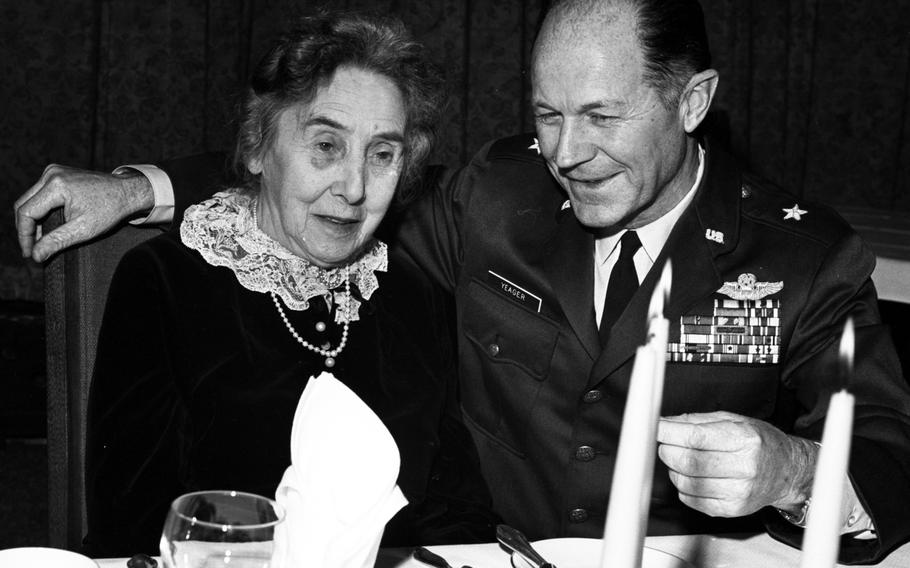 Brig. Gen. Charles E. Yeager, vice-commander of the 17th Air Force at Ramstein Air Base, is reunited with 84-year-old Mrs. Vera Starodvorsky, who hid him from the Germans after his plane was shot down in occupied France in March, 1944. (Lloyd Borguss/Stars and Stripes)

RAMSTEIN, Germany — A general shared his table here Wednesday evening with a family that shared their table with him and who helped him escape from behind Nazi lines more than 25 years ago.

Mrs. Leiser, wife of a retired U.S. Army major, George E. Leiser, who is now employed at MATCOM in Zweibruecken, Germany, learned that Yeager was at Ramstein from an S&S article announcing that he is the new vice-commander of the 17th Air Force.

Her mother and grandmother were coming from France to visit her in Zweibruecken so she contacted the general who arranged for the reunion.

"I'll never forget that day — March 5, 1944 — when I was flying over France and tangled with the Luftwaffe," the general told the Stars and Stripes.

"My Plane, a P51 Mustang, was hit and I picked up some shell fragments in my leg. Forced to bail out, I landed in a farming area about 50 miles south of Bordeaux."

At the time he was downed, Yeager was a flight officer, a rank created during World War II for some flying personnel. It was about equal to the lowest grade of warrant officer. The general recalled that two or three people tried to help him but they couldn't speak English and he couldn't speak French.

So they took him to Mrs. Starodvorsky, who was in bed suffering from rheumatism.

"I really received the third degree from the old gal," Yeager fondly commented. "She was the only one in the village who could speak English, having learned it as a girl from her English governess."

It was common practice for the Nazis to dress up like downed U.S. pilots and thereby learn the intricacies of the French underground.

"She asked me my age, and I told her 21. She then asked if the Americans were getting so hard pressed that they were sending kids over now.

"Then she asked if I was married, I told her no. Quickly she asked why I was wearing a wedding ring. I wasn't, it was a class ring, but I wore it on the right hand where many Europeans wear their wedding ring," the general said.

After several more questions Mrs. Starodvorsky was satisfied of Yeager's identity and had her daughter tend to his wounds. Hidden in a hayloft until dark, the downed officer was later allowed the comforts of the home.

The precautions were wise, as the Germans came looking for downed pilots that day and even checked the barn while Yeager was in it, but didn't find him.

"The next day a man brought me some clothes that belonged to a Frenchman who was a prisoner in Germany. Disguised as woodsmen with saws over our shoulders, we rode bicycles to Nerac, about a two-day journey."

Mrs. Starodvorsky told the general at their Wednesday reunion that the man who took him to Nerac was later killed by the Nazis.

Yeager spent about six weeks with French resistance fighters, helping them with guns, ammunition and explosives that were regularly paradropped by the British.

Some time later, Yeager and another downed American were taken to the Pyrenees, and they made their escape to Spain.

"We turned ourselves in to the Spanish police and after about four or five days in jail, the American consulate bailed us out and we were sent to England to await shipment to the U.S.," the 17th AF vice-commander recalled.

But Yeager wanted no part of duty in the U.S.; he wanted to rejoin his old outfit even though it was policy to send men back to Stateside assignments once they were behind enemy lines.

After working his way up through channels, Yeager camped outside of Gen. Eisenhower's quarters in England until he got an interview with the supreme commander.

Eisenhower reluctantly told him he would see what could he done and, after about a month of waiting, Yeager was allowed to rejoin his unit.

The very first day he was back in action, Flight Officer Yeager downed five enemy aircraft including one of Germany's first jets. Before the war had ended, the "ace" fighter pilot was credited with downing 13 enemy aircraft.

A story in the Stars and Stripes in 1944 stated that "Ike" was vindicated in his decision to let the young flier rejoin his former outfit. Yeager later had the soldier-president autograph the clipping.

Yeager commented on the sharpness of Mrs. Starodvorsky, who is now 84 years old.

"She could recall the events of those day like they were yesterday. She even remembered that I was from West Virginia.

"The people of the village had my name from when they aided me, and she told how they followed my later exploits — when I broke the sound barrier, was on the cover of Time and Newsweek, and any other time I made the news."

In 1956, while assigned to duty in France, Yeager set out with his family to visit the places of yesteryear during his escape to Spain. He was able to find Nerac but not where the Starodvorskys lived.

"I looked up one of may resistance friends in Nerac. Named Gabriel, he was especially helpful to me in my escape. He wasn't hard to find because he was mayor of the city."

At the end. of the reunion, the general expressed "real pleasure for the opportunity of reliving the past with those who laid their necks on the line for me."