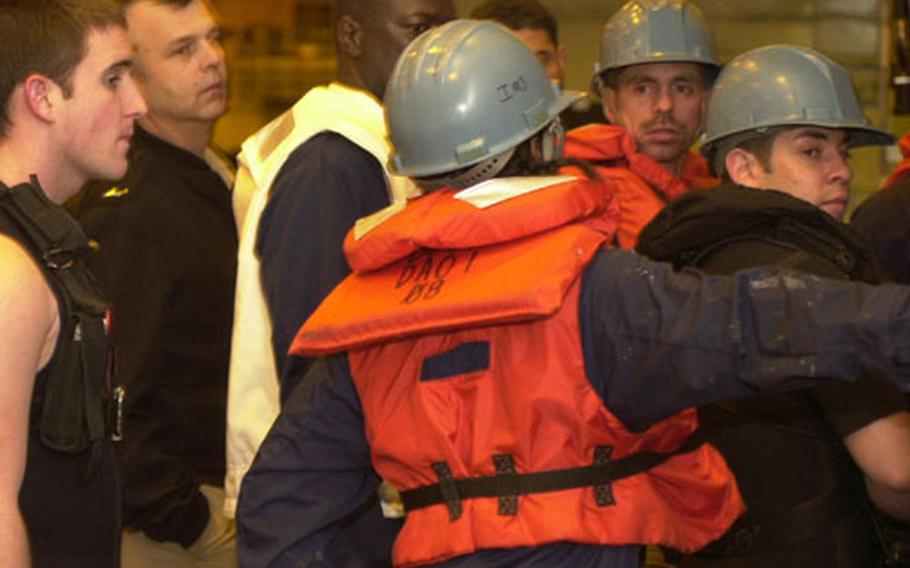 A search-and-rescue team aboard the USS Bataan rushes to board a small boat after a man-overboard call was sounded Thursday night in the Persian Gulf. It turned out to be a false alarm. (Scott Schonauer / S&S)

In seconds, the frantic call over the ship&#8217;s loudspeaker yanked rescue swimmer Petty Officer 3rd Class Jose Velasco out of his bunk and into his dive suit. This was no late-night drill, and the search-and-rescue team raced to find a sailor or Marine who might have fallen into the Persian Gulf.

It turned out to be a false alarm. Somebody is suspected of either purposely or accidentally dropping a light stick into the water.

The incident delivered a brief scare on Thursday as the Bataan steamed north to drop off Marines for duty in Iraq. But it also offered a peak at how quickly crewmembers and rescue teams react to an emergency at the most unexpected time.

Dozens of sailors rushed from their living quarters and work spaces to the hangar bay, so supervisors could do a roll call. On the flight deck just above their heads, a helicopter started its engines.

Velasco had already grabbed his dive boots and slipped on his wet suit by the time most of the sailors had gathered.

Chief Warrant Officer Mark Skokowski sprinted down after getting off a routine watch on the bridge.

In minutes, they boarded a small boat and began combing the waters around the 844-foot ship for any indication of a person &#8212; a strobe, a light stick or reflective vest. Rescue teams should be able to be in the water in six minutes. Skokowski estimated the group did it in half that.

Time matters. If the water is cold, it doesn&#8217;t take long for someone to develop hypothermia. If the fallen sailor or Marine breaks his or her neck, they could be unconscious.

It&#8217;s the job of the rescue team to find them and deliver first aid on the boat immediately, if necessary.

Falling off a ship is dangerous in any body of water, but the Persian Gulf is particularly fraught with hazards. Snakes and sharks infest the waters. Rescue teams also have to watch for garbage floating in the water and deal with oil slicks. In a few rare cases, they might see a floating camel carcass. On Friday, several dead goats floated by the ship.

As the team scoured the starboard side of the ship, the different departments tried to account for every sailor and Marine on board. It took only 12 minutes to account for the 1,655 servicemembers and 15 civilians.

If anyone were unaccounted for, they would have called out the missing by name over the loudspeaker.

While Thursday&#8217;s emergency turned out to be a false alarm, it reminded sailors that there are risks &#8212; even on a deployment some have called nothing more than a &#8220;taxi ride&#8221; for Marines.

&#8220;People don&#8217;t understand how dangerous the shipboard environment can actually be, especially these new kids coming into the Navy,&#8221; said Wilson, the safety department&#8217;s leading chief petty officer. &#8220;But when you&#8217;ve been out here awhile, you see some stuff that happens out there. You quickly learn that it&#8217;s a dangerous business. And even just your normal, mundane, daily routine can turn out to be something totally unexpected.&#8221;