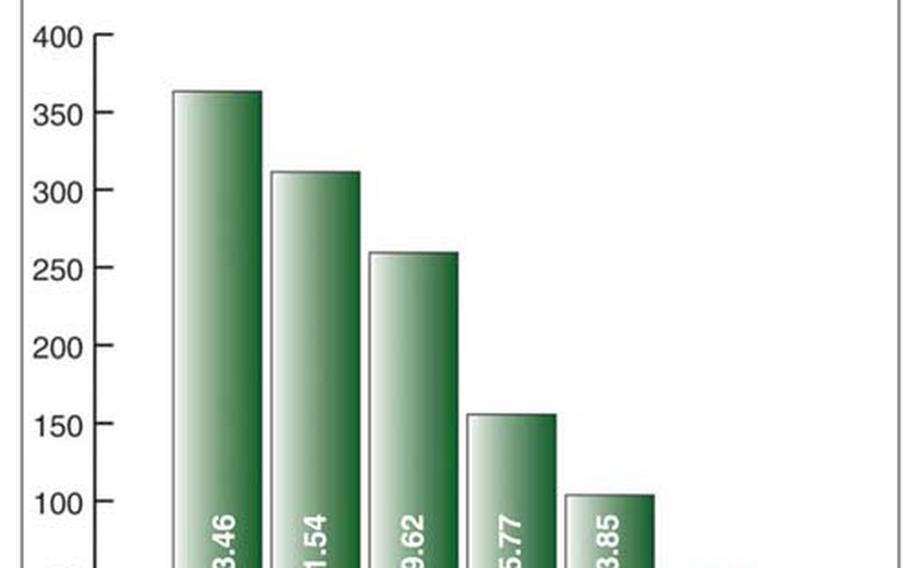 Civilians and servicemembers alike say although the dollar has gotten stronger against the British pound in recent months, it still feels like Uncle Sam is shortchanging them when it comes to their cost-of-living allowance.

Despite the stronger dollar, shopping and eating out off base in England can be a bit pricey. For example, a burger in some restaurants around RAF Mildenhall and RAF Lakenheath can cost more than 7 pounds, or almost $10. Those prices can be hard to swallow for both civilian employees and servicemembers.

Marcus Mullen, who works for Service Deployment and Distribution Command at RAF Mildenhall, said his wallet has taken a hit to the tune of about $400 a paycheck.

"There is nothing I can do about it," Mullen said. "Because of high prices over here, we have cut out eating on the economy."

Mullen said his shrinking paycheck means his family is staying home more, not driving as much to avoid paying British petrol prices and cutting back in other ways.

Joe Twilla, a clerk for the Force Support Squadron at Mildenhall, said his allowance dropped from about $300 a paycheck to $58.

"You have to learn not to depend on it so much," Twilla said about the allowance, which he only started receiving about six months ago.

"To survive over here, you have to cut all the corners you can and you have to shop on base. It does hurt, but I was used to living without (post allowance)."

"I think it is going to get worse before it gets better," Mullen said.

Servicemembers&#8217; equivalent to a post allowance is the cost-of-living allowance, or COLA, which also has gone down drastically as the dollar got stronger.

Chief Master Sgt. Ronald Draper, with the 100th Security Forces Squadron at RAF Mildenhall, said his COLA has gone down by about 60 percent, or $700, a month in the past five or six months.

Draper said he hears how the decline affects the junior enlisted airmen in his unit&#8217;s ranks. Those airmen have to budget their money more and pinch pennies wherever they can, he said.

The trade-off of a lower COLA because of a stronger dollar, however, is not bad news to everyone.

Air Force Capt. Kathleen Pohl of the 10th Force Support Squadron said although her paychecks have dropped by about $250, she is happy to see her dollar go further off base. She lives about 20 miles from RAF Mildenhall.

"I actually started shopping off base more because the exchange rate has gone down," Pohl said.