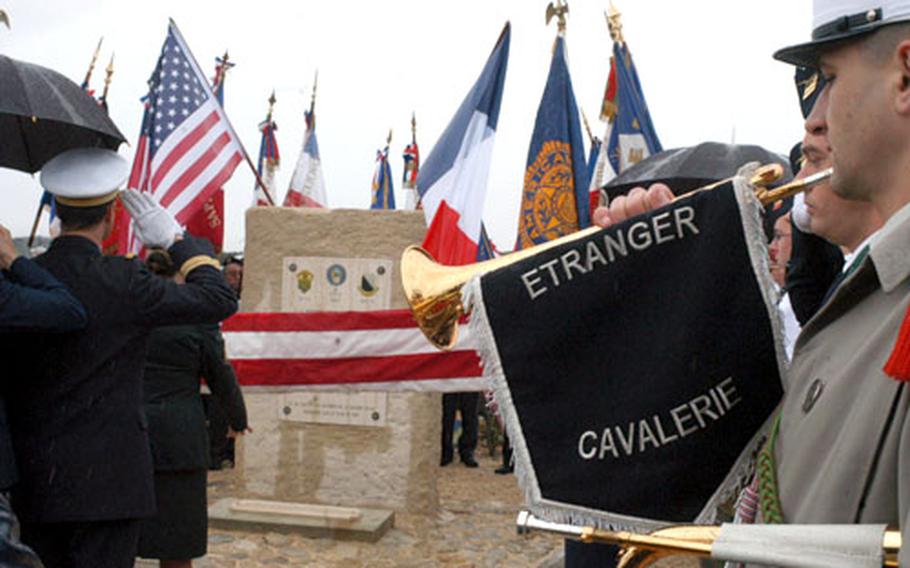 A French bugler prepares to play Saturday at Plan de Dieu, France, as local and American military members unveil a new memorial to five U.S. pilots downed in the area in the summer of 1944. (Ben Murray / S&S)

PLAN DE DIEU, France &#8212; At first glance, the site for France&#8217;s newest memorial to the American forces that fought through the country in World War II looks unremarkable.

Set deep in the middle of a sprawling collage of fields and budding grape groves, the simple stone monument is marooned in the countryside, just off the side of a one-way dirt road.

But to the approximately 200 French residents who gathered there in an icy spring rain last weekend, the site is more than a muddy pasture. It is a place where five young American pilots crashed and died fighting to help free France from the Germans 60 years ago.

On Saturday, French and American military representatives met to dedicate a new shrine to the five P-38 Lightning pilots killed while attacking nearby airfields in southeastern France.

&#8220;This year, 2005 will see the 60th anniversary of the liberation of France,&#8221; said Paul Durieu, mayor of the nearby town of Camaret Sur Aygues, through an interpreter. &#8220;We then thought it necessary to express with this memorial stone our sincere gratitude to those young pilots for their dedication in the darkest hours of our history, for their active participation in the liberation of our country and to the victory of the free world over Nazi Germany.&#8221;

Three of the honored pilots went down in an initial attack on June 15, 1944, trying to weaken German defenses for the Allied assault of southern France that would follow the Normandy invasion.

Second Lt. Hugh Crandall Jr. and 1st Lt. Harold V. Duggleby from the 94th Fighter Squadron were both brought down by anti-aircraft fire on strafing runs against the Orange-Plan de Dieu airfield. At about the same time, 1st Lt. Warren E. Semple from the 49th Fighter Squadron was shot down by a German pilot while strafing the neighboring Orange-Caritat airstrip.

Watching the attacking planes get shot down was shocking for those on the ground, said local resident Roger Bescarrat, who was 11 years old in 1944.

Now 72, Bescarrat used his hands to demonstrate the slow, labored circle he saw Simpson&#8217;s burning P-38 take as the pilot tried to keep it aloft after taking flak. The plane was heading straight for his boyhood home, Bescarrat said through an interpreter, before Simpson gave it one last jerk to the side and crashed in the field behind the house.

Others at the memorial said they came out of curiosity and respect for the young pilots.

&#8220;Little by little people are forgetting,&#8221; Claude Richard, 82, said through an interpreter. A former pilot for the French air force trained in Canada during the war, Richard said such monuments are crucial reminders of the war for the next generation.

Judy Hodes, the half-sister of Duggleby, one of the felled pilots, said the memorial and the crowd at Plan de Dieu were a moving show of appreciation.

Hodes, an American delegation led by Maj. Gen. Craig McKinley, European director of reserve component affairs for the U.S. European Command, and representatives from four French towns laid wreaths at the base of the memorial.

In a brief speech, McKinley praised what he called the accomplishment of the five pilots lost over Plan de Dieu.