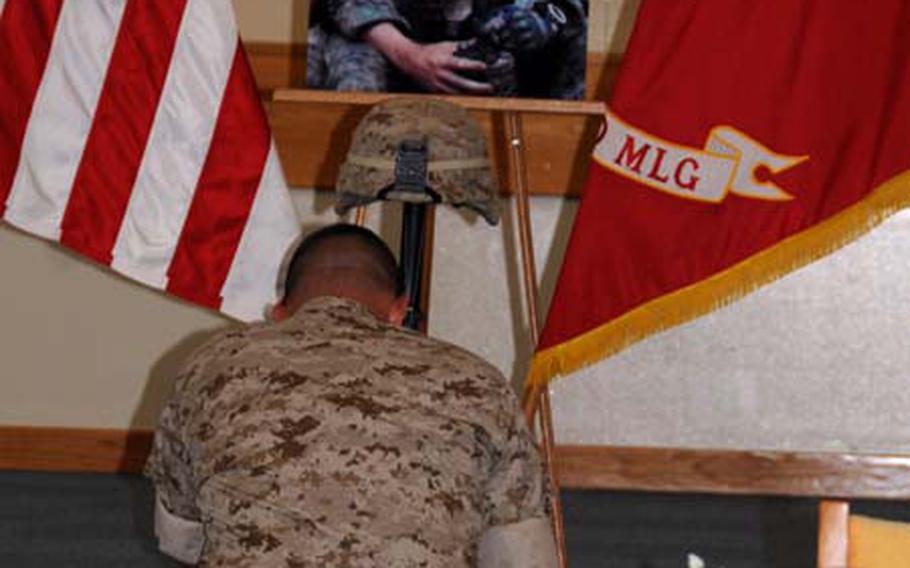 A Marine pays his final respects to 1st Lt. Nicholas A. Madrazo at a memorial service at the Camp Kinser, Okinawa, chapel Friday. Madrazo, 25, of Bothell, Wash., was assigned to Combat Logistics Regiment 37 and was killed in Afghanistan Sept. 9. (Cindy Fisher / S&S)

CAMP KINSER, Okinawa &#8212; He died on the battlefield. But that&#8217;s where he wanted to be, because he was warrior, a fellow Marine said.

He was also an inspiration, friends said Friday during a memorial service at Camp Kinser for 1st Lt. Nicholas A. Madrazo. The 25-year-old was killed Sept. 9 by a roadside bomb while embedded with the Afghan National Army in Parwan province, Afghanistan.

"For those who knew him, we are better people for having known him," said Col. Thomas Gorry, Madrazo&#8217;s commanding officer at Combat Logistics Regiment 37. "He was known for his warm smile, caring attitude and concern for others."

Longtime friend 1st Lt. James Gallagher told assembled Marines that Madrazo was a "great friend ... fun-loving, thoughtful but most of all, Nick was a warrior." Madrazo was always "taking a bad situation, turning it around and making it great. That was the essence of Nick," Gallagher said.

Gallagher said Madrazo volunteered for duty in Afghanistan, where he deployed in March.

"I remember how excited he was to get into the battle," he said. "Nick went out there doing what he wanted to do."

Madrazo is scheduled to be buried at Arlington National Cemetery on Wednesday.