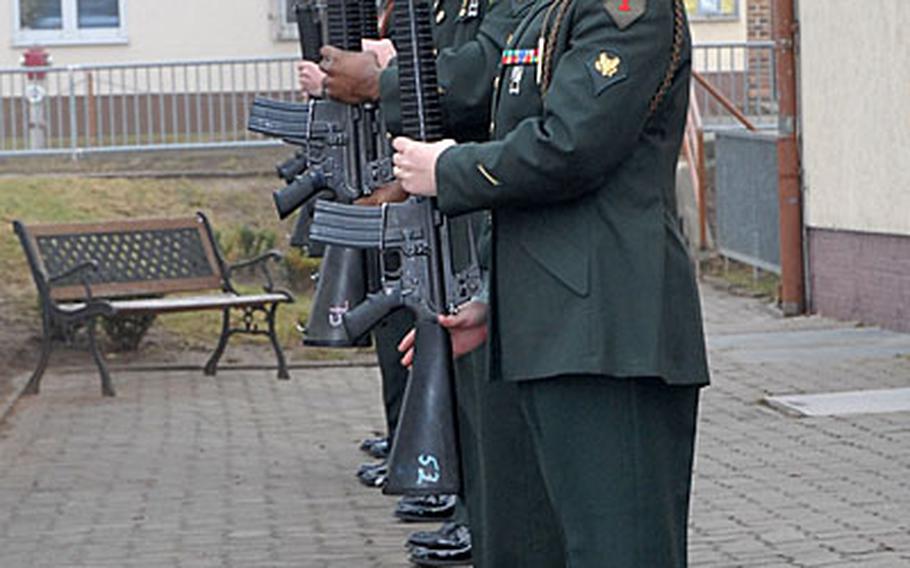 A squad of 1st Infantry Division soldiers presents arms for the playing of taps during a memorial ceremony Thursday for two fallen sergeants from 1st Battalion, 77th Armor Regiment, at the Ledward Barracks chapel in Schweinfurt, Germany. (Mark St.Clair / S&S)

Sgt. Corey J. Aultz, 31, of Port Orchard, Wash., and Sgt. Milton A. Gist Jr., 27, of St. Louis were killed Jan. 30 in Ramadi when a roadside bomb detonated near their vehicle. Both were members of the battalion&#8217;s Headquarters and Headquarters Company.

A large crowd packed the chapel, and many inside spoke of their love and respect for the fallen soldier. One of them, Sgt. Christian Thomas, was a friend of both Aultz and Gist.

&#8220;To lose any soldier in Iraq is always a tough thing to deal with. But it is even harder when the fallen are your friends,&#8221; Thomas said. &#8220;My only advice to anyone who will ever have to experience such a loss is that you cannot dwell on their loss. Instead, celebrate their lives by remembering all of the times that they touched your life in some way.&#8221;

A previous memorial ceremony was held Feb. 5 in Ramadi, and the battalion&#8217;s rear detachment commander, Capt. Tom McMurtrie, read some of the words that were shared in Iraq by the HHC Commander, Maj. Jabari Miller, to the family and friends present Thursday.

&#8220;[I&#8217;d] never really seen Sgt. Aultz mad, upset or disheveled when doing anything, whether it be in the field or in garrison. He was the consummate quiet professional who strived to do the right thing by others, although they might not be doing the right thing by him,&#8221; Miller said. Aultz had been with 1-77 for at least 10 years.

&#8220;Whatever he did, he did with style and with passion,&#8221; Miller said of Gist. A cook by trade, Miller said Gist could be seen every morning with &#8220;everything before him looking as though it was out of some gourmet magazine &#8230; and he capped it all off with a great big Gist smile and an attitude that he and his people were the best there were.&#8221;

Gist, who had just returned from visiting his family on leave when he was killed, is survived by his wife, Raheisha, of Topeka, Kan., daughter Jendayah, 4, son, Jakweli, 1, and his mother, Angienette Morgan.

Aultz, survived by wife Nadine, daughter Selena, father Donald Degaugh, and sister Tamra Aultz, was also well-loved by his German neighbors and friends from the community of Munnerstadt, so much so that a bus was used to bring them all to the ceremony.

Based mainly in or near the cities of Baghdad and Ramadi, the brigade has suffered heavy losses during the first half of its yearlong rotation.