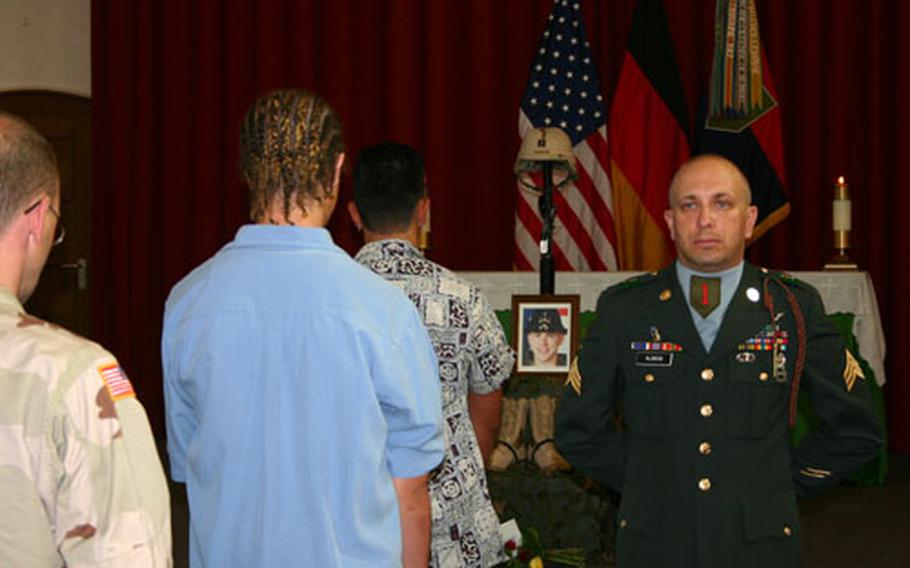 A soldier stands guard in front of the memorial for Capt. Andy Houghton, who was injured in a rocket attack in Iraq and died nearly a month later in a hospital in Washington, D.C. (Courtesy of U.S. Army)

A soldier stands guard in front of the memorial for Capt. Andy Houghton, who was injured in a rocket attack in Iraq and died nearly a month later in a hospital in Washington, D.C. (Courtesy of U.S. Army) 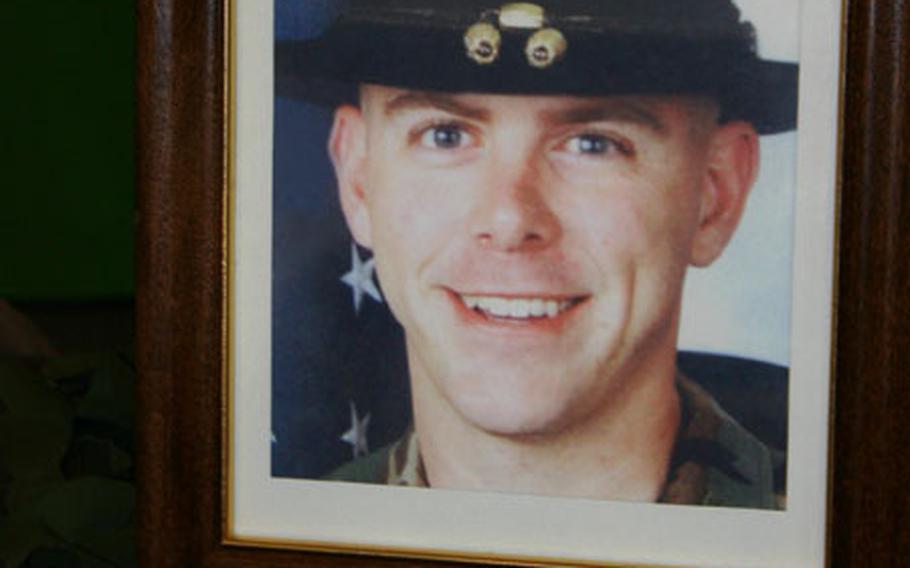 Look at the photos on Capt. Andy Houghton&#8217;s Web site and you see one thing the same in every one, whether he&#8217;s with his family, at West Point, in uniform, in Iraq, or even trussed up with duct tape.

On Wednesday, Houghton&#8217;s beaming portrait stood with his rifle, his boots, his helmet and his dog tags, lighting up the altar at the Ledward Barracks chapel in Schweinfurt, Germany. Dozens of friends gathered to mourn Houghton, 25, of the 1st Squadron, 4th Cavalry Regiment, nine days after his death from terrible injuries suffered a month earlier in Iraq.

&#8220;Andy was the happiest person I have ever known,&#8221; said Master Sgt. Steve Ziebarth, a 1/4 Cavalry platoon sergeant in Iraq, whose comments were read at the service.

Houghton grew up in Texas, graduating from a Jesuit high school in Houston in 1997. He was on the football, track and debate teams. Outside of school, he earned the rank of Eagle Scout and volunteered with the Special Olympics program.

Houghton was appointed to the U.S. Military Academy and commissioned as an armor officer after graduating from West Point in 2001.

Friends said he won the loyalty of his troops with his good cheer and his willingness to lead from the front.

During a gunnery practice at the Grafenw&#246;hr training area, Ziebarth recalled, the platoon tested Houghton&#8217;s good humor by duct-taping his arms, legs and mouth, then snapping a picture. The photo shows Houghton&#8217;s grin around the edges of the tape.

During his months in Iraq, his platoon carried out 400 combat missions. Houghton personally led many of them, including the one near Samarra early on the morning of July 10 &#8212; his first day back after two weeks of leave in Texas. As he watched from the open commander&#8217;s hatch of his Bradley fighting vehicle, a rocket-propelled grenade exploded near his face.

By the time he reached a field hospital, Houghton had lost two quarts of blood and had no pulse or blood pressure, according to the family&#8217;s Web site, www.andyhoughton.org. But a nurse on duty matched his blood type and gave him a direct transfusion, allowing him to transfer to Walter Reed Army Hospital in Washington, D.C.

Houghton lay comatose for a month with his parents, George and Cindy, by his side. His brother, Matt, stayed with him, too, leaving to attend his graduation from Army Officer Candidate School.

Houghton died Aug. 9, three days after a hemorrhage badly damaged his brain. That day, the Army promoted him to captain.

Houghton was buried Monday at West Point, and friends memorialized him Wednesday in Houston as well as in Schweinfurt.

&#8220;When he received his wounds, he was among men who loved him, and he was doing what he wanted to be doing: leading soldiers,&#8221; Ziebarth said.