Fallen soldier had wanted to be where the action was 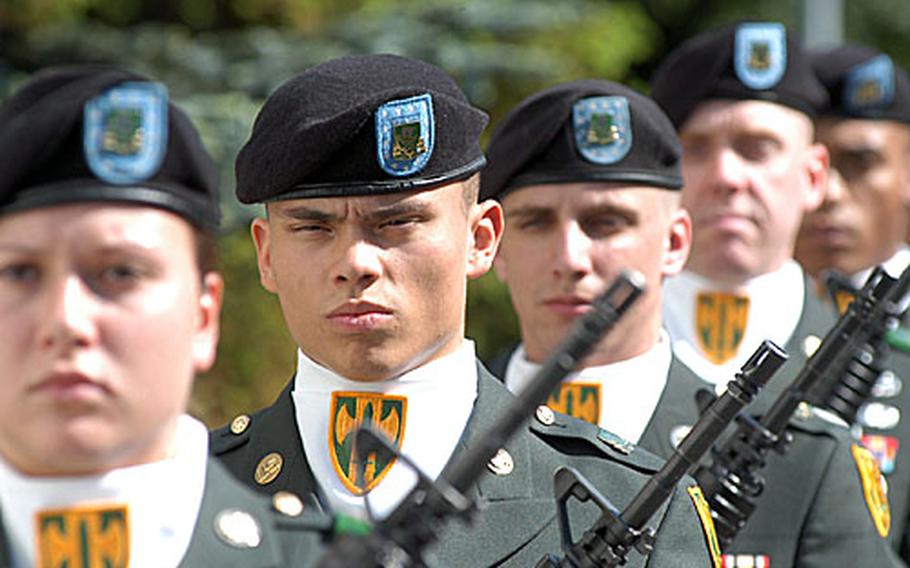 A firing party stands outside the chapel at Cambrai-Fritsch Kaserne during the memorial ceremony for Spc. William A. Farrar Jr., a member of the 127th Military Police Company, 709th Military Police Battalion, 18th Military Police Brigade, who was killed May 11 by a makeshift bomb while driving the lead vehicle in a convoy in Al Iskandariyah, Iraq. (Matt Millham / S&S)

A firing party stands outside the chapel at Cambrai-Fritsch Kaserne during the memorial ceremony for Spc. William A. Farrar Jr., a member of the 127th Military Police Company, 709th Military Police Battalion, 18th Military Police Brigade, who was killed May 11 by a makeshift bomb while driving the lead vehicle in a convoy in Al Iskandariyah, Iraq. (Matt Millham / S&S) 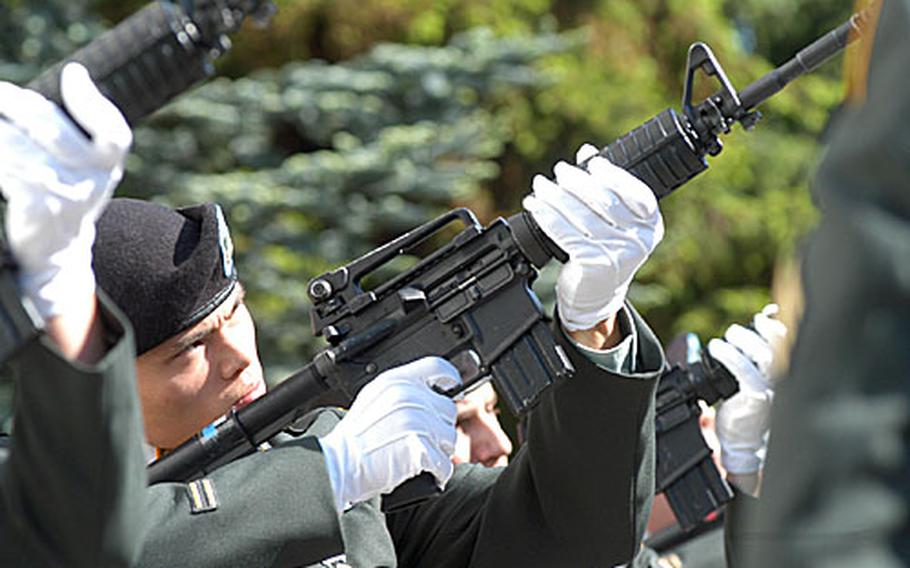 DARMSTADT, Germany &#8212; Spc. William A. Farrar Jr. hated the times he had to stay behind when others rolled out on missions in Iraq.

&#8220;He wanted to be out where the action was,&#8221; Sgt. Jesse Hernandez, a team leader in the 127th Military Police Company, recalled, speaking about his former soldier.

Farrar, who called himself &#8220;Tony,&#8221; was in the action, driving the lead truck in a convoy May 11 in Iskandariyah, Iraq, when a makeshift bomb detonated near his vehicle. The soldier, a 20-year-old from Redlands, Calif., was killed in the attack.

&#8220;Most squad leaders I know in Iraq enlisted before [Sept. 11, 2001] probably not having a choice in going downrange, but Spc. Farrar joined because he wanted to,&#8221; Hernandez told the crowd that packed the chapel Monday at Cambrai-Fritsch Kaserne.

&#8220;He was the kind of soldier that complained when he had to be stuck on the [forward operating base],&#8221; Hernandez said. Hernandez explained to his young soldier that he couldn&#8217;t go out on every mission; others needed to get some combat experience under their belts as well.

Still, he took every opportunity he could to get outside the wire.

&#8220;The minute someone came up sick or tired before a mission he would be there knocking on a sergeant&#8217;s door asking if he could fill their place. That was just Farrar.&#8221;

Capt. Jennifer Miller, the company&#8217;s rear-detachment commander, said she was most comforted by the fact that Farrar, who was posthumously promoted from private first class to specialist, liked being in the Army, enjoyed his job and believed in his purpose in the Army and in what he was doing in Iraq.

Farrar, the youngest soldier in his platoon, joined the Army soon after graduating high school in 2005. Hernandez recalled when he arrived at the unit with five other soldiers, all exhausted from the trip to Germany.

Looking for a reason to make Farrar do some pushups, he accused the soldier, who looked even younger than his years, of having lied to the Army about his age.

After about four pushups, Hernandez had him get up and let him know he was just giving him a hard time. The two became friends after that.

He said he doesn&#8217;t know if Farrar would get the place in history he deserves, &#8220;but I do know that when my son grows up and asks me what the war was like I will tell him that it was hell, but I was there with some great soldiers like Spc. Farrar.&#8221;