President Bush choked up at the end of his remarks about Petty Officer 2nd Class Michael A. Monsoor. He later comforted Sally Monsoor before the Navy citation was read. (Patrick Thornton / S&S)

President Bush choked up at the end of his remarks about Petty Officer 2nd Class Michael A. Monsoor. He later comforted Sally Monsoor before the Navy citation was read. (Patrick Thornton / S&S) 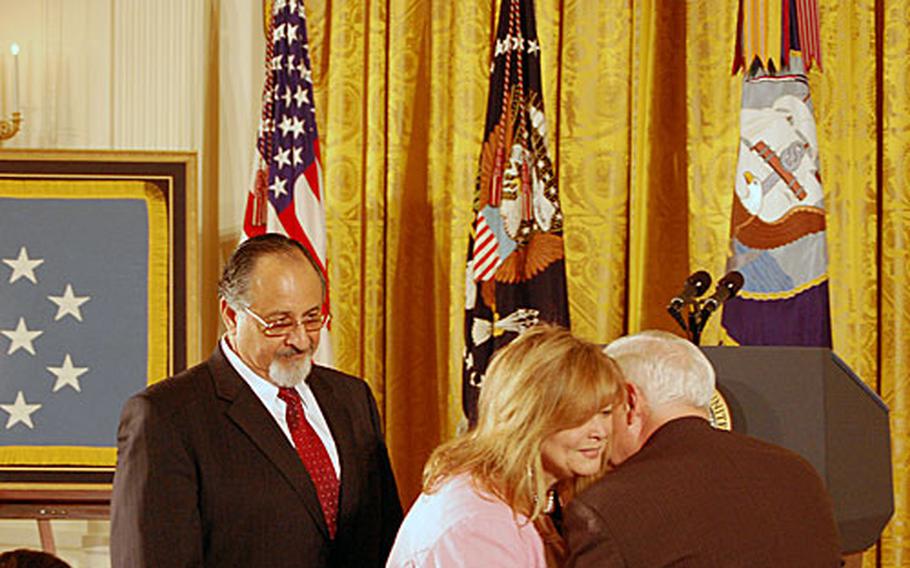 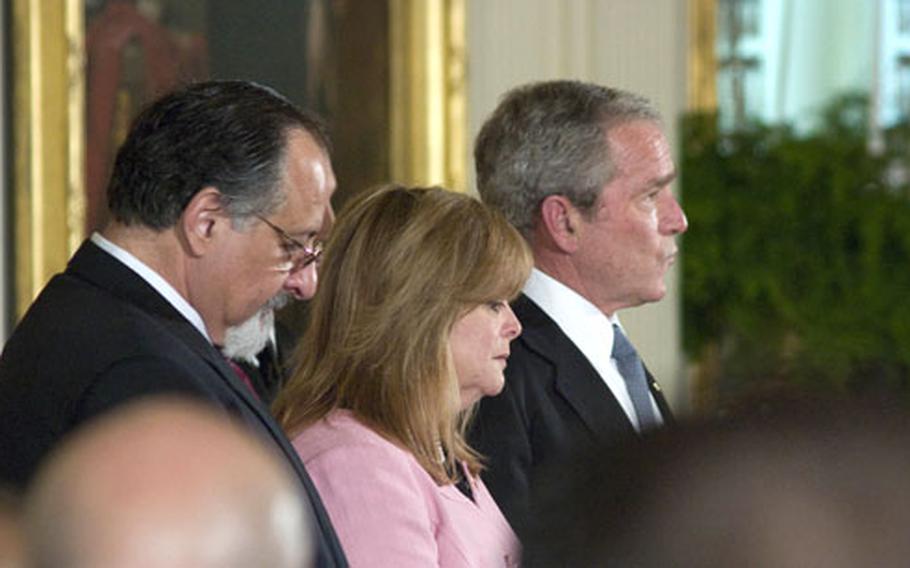 George and Sally Monsoor stand beside President Bush and listen to the Navy citation about their son, Petty Officer 2nd Class Michael Anthony Monsoor. The Navy SEAL was awarded the Medal of Honor posthumously for his efforts in Iraq at an emotional ceremony Tuesday. (Emily Brown / S&S) 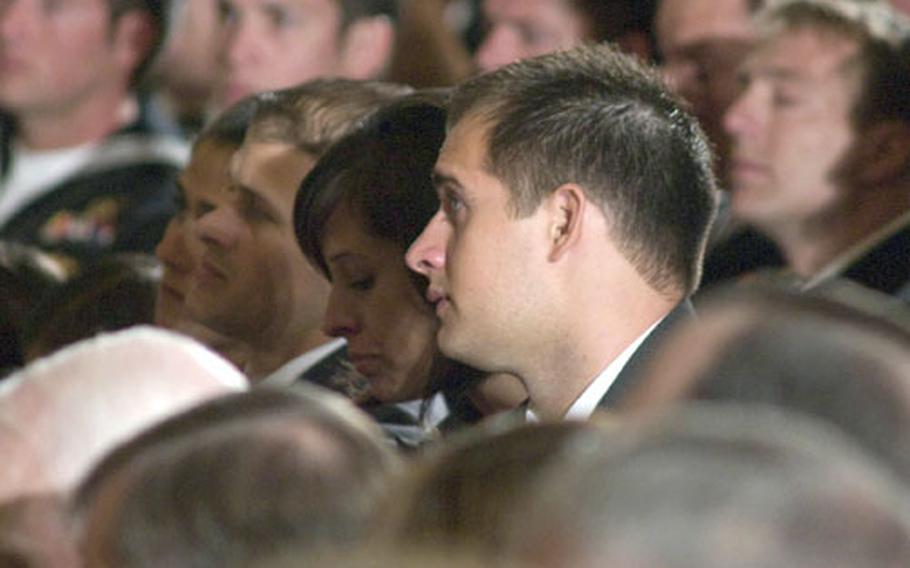 Siblings of Petty Officer 2nd Class Michael Anthony Monsoor listen as President Bush spoke about their brother&#39;s heroic efforts. The Navy SEAL was awarded the Medal of Honor posthumously Tuesday during an emotional ceremony at the White House. Bush fought back tears as he talked about formative events in Monsoor’s life, and how he earned the medal. (Emily Brown / S&S)

WASHINGTON &#8212; A tear rolled down President Bush&#8217;s cheek as the citation for Petty Officer 2nd Class Michael A. Monsoor was read Tuesday in the East Room of the White House.

Monsoor, a Navy SEAL, was posthumously awarded the Medal of Honor on Tuesday for jumping on a grenade to save his buddies.

Monsoor is the fourth servicemember to be awarded the Medal of Honor in the global war on terror.

Monsoor had previously been awarded the Silver Star for dragging a wounded SEAL to safety while under fire. With the Medal of Honor, he is the most highly decorated servicemember in the war on terror.

Bush recalled Tuesday how Monsoor suffered from asthma as a child, but he strengthened his lungs by swimming to become a stellar athlete.

Eventually, Monsoor would take on the extreme physical challenge of Navy SEAL training, determined to make it, Bush said.

&#8220;The Medal of Honor is awarded for an act of such courage that no one could rightly be expected to undertake it. Yet those who knew Michael Monsoor were not surprised when he did,&#8221; Bush said.

Monsoor was in Ramadi when an insurgent lobbed a grenade onto the roof where Monsoor and his team were positioned. It hit Monsoor in the chest before bouncing to the ground, according to a summary of his actions provided by the Navy.

&#8220;He immediately leapt to his feet and yelled &#8216;grenade&#8217; to alert his teammates of impending danger, but they could not evacuate the sniper hide-sight in time to escape harm,&#8221; the summary of action said.

Monsoor had a chance to escape, but he knew that the other SEALs did not, so he threw himself on the grenade, Bush said on Tuesday.

Bush&#8217;s upper lip began to tremble after he told Monsoor&#8217;s parents that the United States owes them a debt that cannot be repaid.

His voice began to break as he said: &#8220;And this nation will always honor the sacrifice he made. May God comfort you. May God Bless America.&#8221;