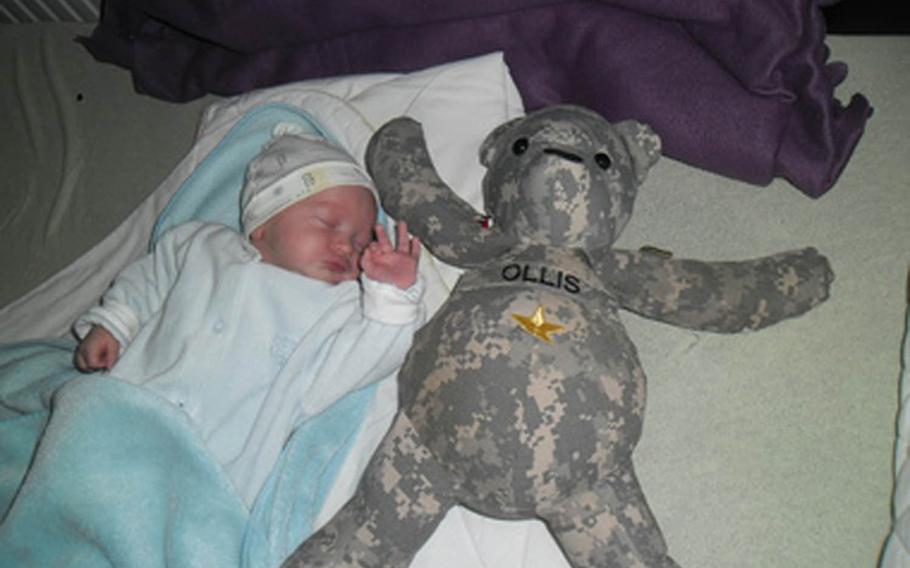 Michael Cierpica received a Matthew Bear from The Matthew Freeman Project upon his birth in Poland last year. His father, Polish army Lt. Karol Cierpica, was saved in Afghanistan by U.S. Army Staff Sgt. Michael Ollis, who stepped up to challenge a suicide bomber during an attack on their forward operating base in 2013. Ollis was posthumously awarded the Silver Star for his actions. Cierpica named his son after Ollis. The Ollis family sent this Matthew Bear as a gift, using material from Ollis' uniform. (Courtesy of Lisa Freeman)

Michael Cierpica received a Matthew Bear from The Matthew Freeman Project upon his birth in Poland last year. His father, Polish army Lt. Karol Cierpica, was saved in Afghanistan by U.S. Army Staff Sgt. Michael Ollis, who stepped up to challenge a suicide bomber during an attack on their forward operating base in 2013. Ollis was posthumously awarded the Silver Star for his actions. Cierpica named his son after Ollis. The Ollis family sent this Matthew Bear as a gift, using material from Ollis' uniform. (Courtesy of Lisa Freeman) 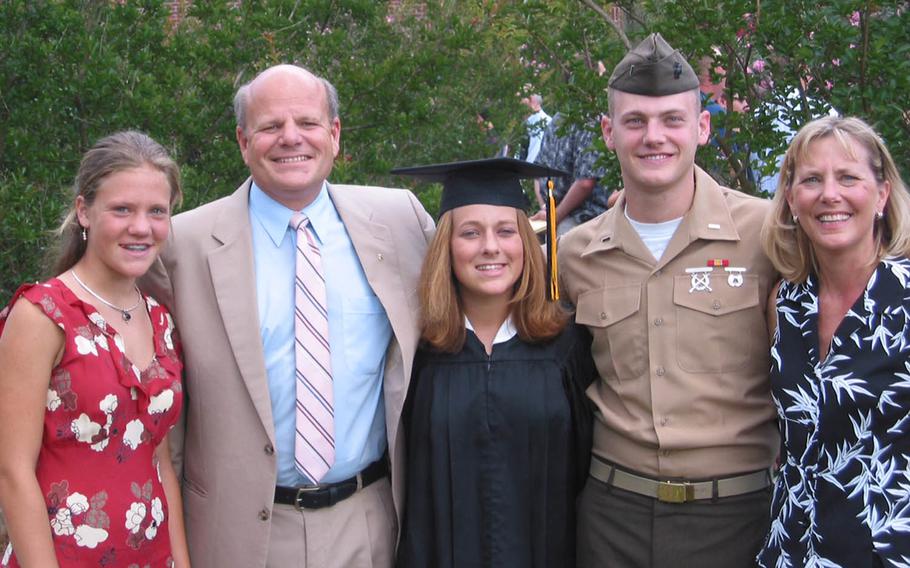 Marine Capt. Matthew Freeman poses with family in this undated photo. Freeman, who was killed Aug. 7, 2009, in Afghanistan, always tried to make a difference helping others, friends and family said. (Courtesy of Lisa Freeman) 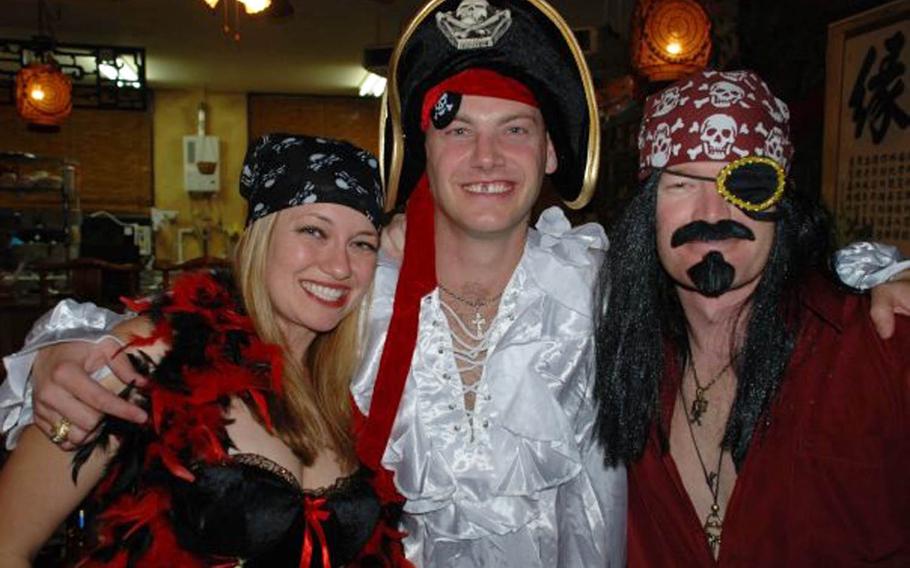 Matthew Freeman, center, was gregarious and lived every moment in his life to the fullest, his friends and family said. He loved a good party with friends. The 29-year-old Marine captain was killed Aug. 7, 2009, in Afghanistan. (Courtesy of Lisa Freeman) 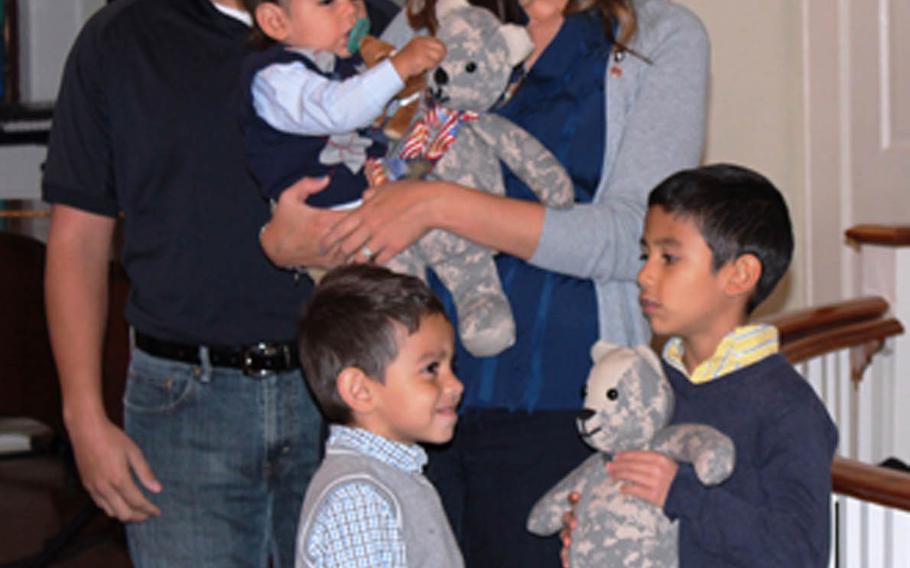 Matthew Bears, made from the uniform of a fallen servicemember, can have a calming effect on Gold Star children who often have difficulty processing the death of a loved one. (Courtesy of Lisa Freeman)

Friends and family recall how Matthew Freeman always tried to help others. It’s been more than six years since the Marine captain fell in combat, but that legacy lives on through those who serve in his name.

A C-130 pilot who didn’t have to pick up a rifle and fight, Freeman volunteered for the ground force when the call came for more troops. The 29-year-old died bravely leading his men onto an Afghan rooftop during an intense firefight with the Taliban on Aug. 7, 2009.

The Matthew Freeman Project started inauspiciously at his direction shortly before his death when he requested school supplies for Afghan children. The nonprofit continued after he was gone, and when ensuring the delivery of supplies became impossible, it focused on college scholarships for the oft-overlooked casualties of war, Gold Star siblings and the siblings of combat-related suicide victims.

The project didn’t stop there: mother Lisa Freeman and a small army of craftsmen began sewing “Matthew Bears” for the children of fallen servicemembers, using their uniforms as material.

“Even as a kid he was always looking to help,” Lisa Freeman said. “He always believed he could make a difference.”

He would often return home from the winding Ogeechee River marshlands near his Georgia home with wildflowers for her, and in the years that followed, he served his community as a Boy Scout and tried to make his high school a better place as student council president.

Freeman, who grew up in Richmond Hill, Ga., about 20 miles from downtown Savannah, was a “river rat” who spent much of his time piloting a flat-bottomed boat through the surrounding wetlands, his mother said. From an early age he wanted to attend the U.S. Naval Academy, following in the footsteps of his father and grandfather into naval aviation, and began doing everything he could to ensure acceptance.

While visiting the academy, Lisa Freeman said her son took her to Memorial Hall, which lists the names of graduates killed in service of their country. She said she thinks her son knew he would one day be added to that roll of honor.

Freeman graduated in 2002 with a degree in aerospace engineering, then joined the Marine Corps.

“Although he was younger than me — I was 27 and he was 21 — his conviction in serving his country made him seem older,” said Josh Staunton, a former Marine who roomed with Freeman for six months at The Basic School. “He was very wise for his age, a deep thinker, and it seemed that his entire being believed in what we were doing in Afghanistan.”

Freeman was promoted to captain in 2006. In 2009, he married his childhood sweetheart, Theresa Hess, before deploying to Afghanistan. He also took the time to whisper some assuring words in his mother’s ear.

“You don’t have to worry about me, Mom,” Freeman told her gently as he placed a coin in her hand. “God is with me.”

The coin was marked with Ephesians from the New Testament, “Put on the full armor of God so that you can take your stand against the devil’s schemes.”

A week after he arrived in Afghanistan, Lisa got a call from her son.

“He said, ‘Mom, the kids would rather have pens and paper more than anything, even food or water. Would you please start a collection and send them to me?’ ” Lisa Freeman said.

She agreed, and the project began to take shape. But plans were soon interrupted.

Two days later, Freeman and his men were pinned down under heavy fire. He led them into the safety of a mud-brick house and cleared it of enemy fighters. He was first to the roof where he eliminated another fighter aiming a rocket-propelled grenade and further engaged the enemy while under fire before he fell. Freeman, awarded the Bronze Star for his actions, was buried at Annapolis.

His parents received some semblance of peace when they discovered what his final journal entry had been — Ephesians 6:13.

“Therefore put on the full armor of God, so that when the day of evil comes, you may be able to stand your ground, and after you have everything, to stand.”

After the initial shock of her son’s death, Lisa Freeman pressed on with her son’s mission — not because he died, she said, but because of the way he lived.

School supplies began pouring into Afghanistan in 2010 and stopped in 2014 when the U.S. combat role diminished to the point where the items couldn’t be hand delivered to the children. The sibling scholarships began in 2013 and continue to this day. Since 2014, approximately 450 Matthew Bears have been distributed to Gold Star families and close family friends.

Bryan Lewis, a childhood friend who named his son after Freeman, said he was bullied when he moved to Richmond Hill during seventh grade. Freeman was the first to reach out to him and offer friendship, he said. Both of Lewis’ kids go to sleep every night with Matthew Bears at their side.

“When someone gives their life for the nation, everyone has great things to say about the person who was lost, regardless of how they were outside of uniform,” Lewis said. “Matt, though, was that great guy always described in such stories. He was no different in and out of uniform. He epitomized the great American hero.”

Lisa Freeman said people would be surprised at how therapeutic a Matthew Bear can be. Lewis agreed.

Matt “continues to be a great friend to my kids and to me as I’ll get to share his story with them both for many years to come,” he said.

Lisa Freeman said people have donated around $20,000 for the scholarships and bears out of about $80,000 in funding they have raised for The Matthew Freeman Project. She said she doesn’t take a salary, so the money goes directly to those who need it. She said that will continue as long as there is funding.

“He was a great son and a lot of fun,” she said. “He lived every minute to its fullest. He had such a short life, but he inspired so many.”

For more information on The Matthew Freeman Project, how to donate or to request a Matthew Bear, visit www.freemanproject.org or https://www.facebook.com/TheMatthewFreemanProject/.