Fallen live on in camp names Less than an hour after the official renaming ceremony, a crane hoists a new sign at the gate of the former Camp Muleskinner in Baghdad. The camp was renamed in honor of Pfc. Rey D. Cuervo, who was killed in action in Baghdad on Dec. 28, 2003. (Michael Abrams / S&S)

Less than an hour after the official renaming ceremony, a crane hoists a new sign at the gate of the former Camp Muleskinner in Baghdad. The camp was renamed in honor of Pfc. Rey D. Cuervo, who was killed in action in Baghdad on Dec. 28, 2003. (Michael Abrams / S&S) 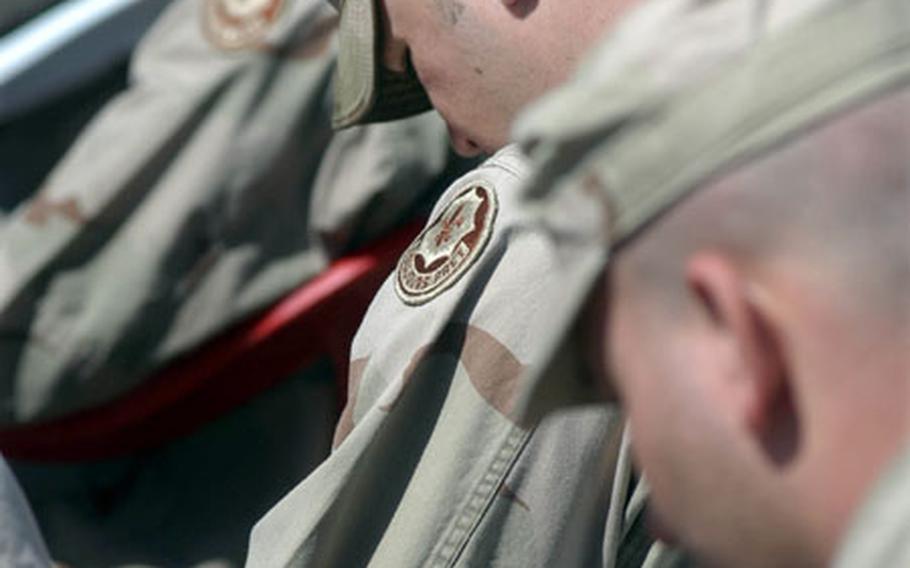 Soldiers salute during the renaming ceremony at Camp Muleskinner in Baghdad on Thursday. (Michael Abrams / S&S) 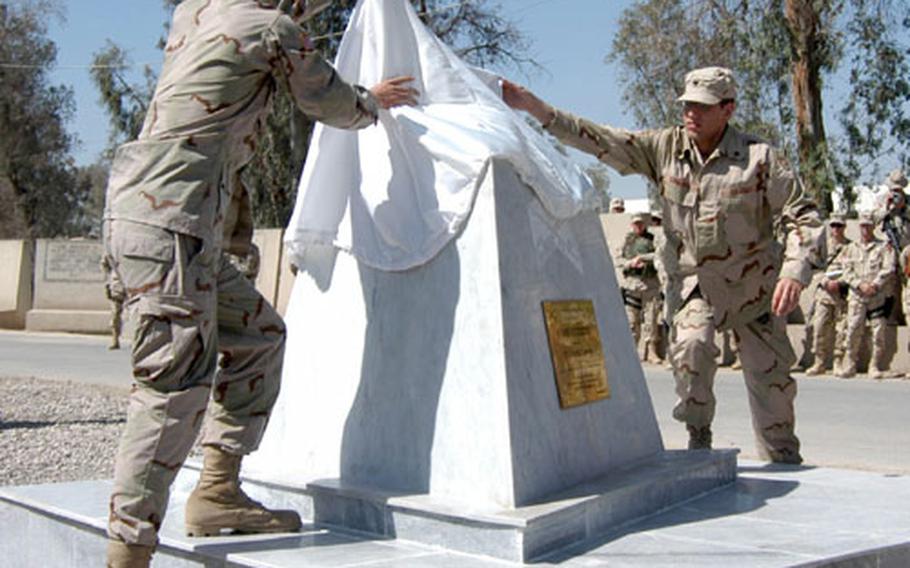 BAGHDAD &#8212; A good soldier. A bunk buddy. An inspiration to the Iraqi people.

Pfc. Rey Cuervo was remembered in many ways Thursday at a ceremony renaming a U.S. base camp in Baghdad in his honor. Camp Muleskinner became Camp Cuervo as dozens of soldiers and a handful of the 1st Armored Division&#8217;s leaders looked on.

Cuervo was 24 years old when a bomb took his life and those of two Iraqi civilians. Five fellow U.S. soldiers and eight Iraqi security personnel were wounded.

Through Wednesday, 600 American servicemembers have died in Iraq since U.S. and British forces invaded the country in 2003. So there are plenty of fallen heroes the military can choose from when it decides to rename one of its facilities in the country.

Too many names, according to Lt. Col. Mark Calvert, who leads the 2nd Armored Cavalry Regiment&#8217;s 1st Squadron. Cuervo was one of his troops.

Unlike previous U.S. missions in Bosnia and Herzegovina and Kosovo, where U.S. camps were often named for heroes from past conflicts, facilities in Iraq are now increasingly bearing the names of those who have died recently while serving their country.

Many wish that they didn&#8217;t have a good reason to rename their camps.

&#8220;I&#8217;d rather have kept the old name and let the new units [rotating in] name them for past fallen heroes as well,&#8221; Calvert said. Because that would have meant that soldiers such as Cuervo were still alive.

Or soldiers such as Pfc. Rachel Bosweld. She was assigned to the 527th Military Police Company. She received the Purple Heart for wounds suffered in one attack in Iraq before getting killed days later in another one. An apartment building at the division&#8217;s Freedom Rest complex bears her name. A plaque on the main building lists the names of other soldiers assigned to the division&#8217;s task force who have died in Iraq.

Camp Cuervo is on the southern end of Baghdad. One of the Army&#8217;s facilities to the north of the city in the Taji area now bears the name Camp Cooke. It&#8217;s named after Command Sgt. Maj. Eric Cooke, the top enlisted soldier in the division&#8217;s 1st Brigade Combat Team, who was also killed by a bomb &#8212; four days before Cuervo.

&#8220;It&#8217;s very appropriate that soldiers who gave the ultimate sacrifice in Iraq are given tribute in this manner,&#8221; Calvert said.

Born in Mexico, he joined the Army in 1999. He wasn&#8217;t an American citizen until President Bush granted it while honoring him after his death at his home base of Fort Polk, La.

Sanabria, one of two soldiers chosen to unveil the memorial dedicated to Cuervo, said he&#8217;s happy that his friend&#8217;s memory will live on as other soldiers continue to call the camp home. Most of them probably won&#8217;t know Cuervo or his story, but Sanabria says he&#8217;s glad he had the opportunity.