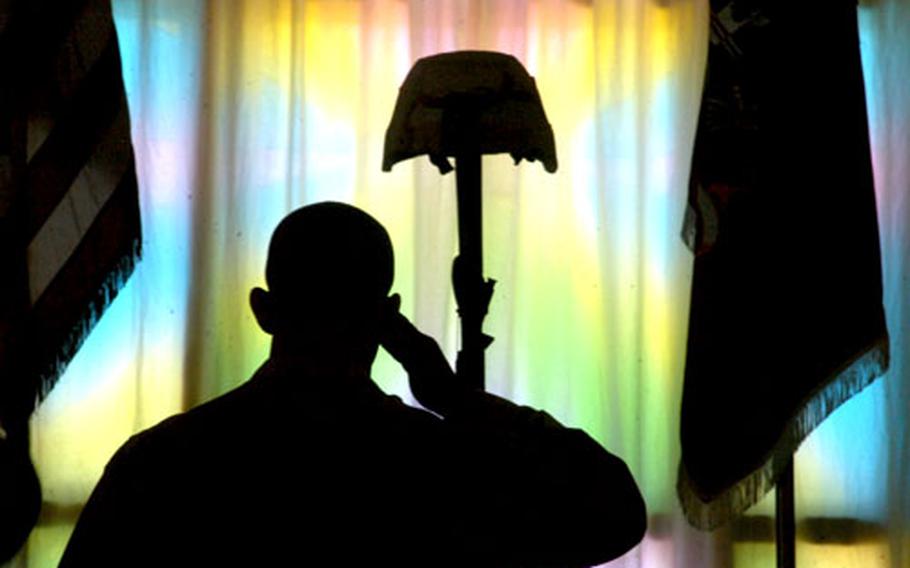 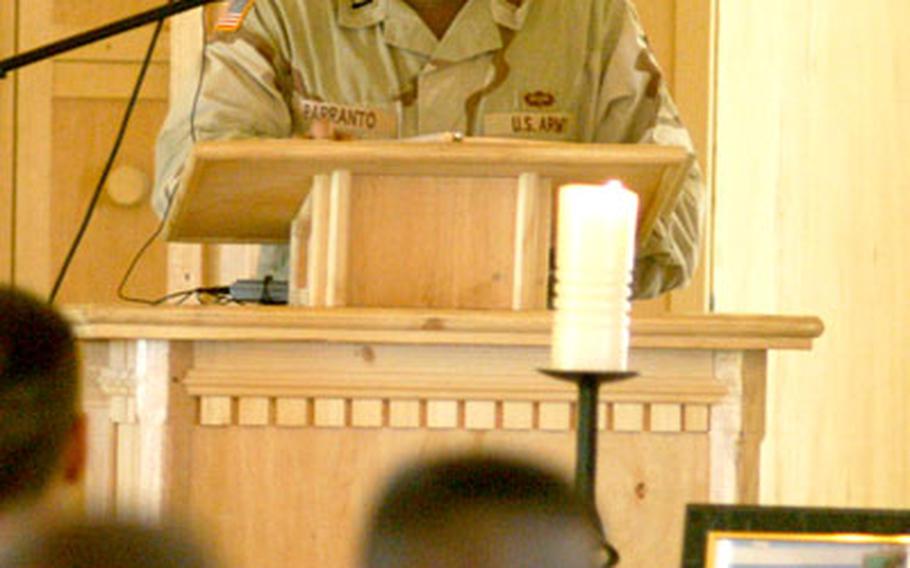 Capt. Gregory Parranto speaks about 1st Lt. Laura Walker, whose photo is at lower right, during a memorial service for her and Sgt. Robert Davis in Kandahar, Afghanistan. (Jason Chudy / S&S)

KANDAHAR, Afghanistan &#8212; Soldiers filled the airfield&#8217;s Fraise Chapel on Saturday morning to honor two comrades who &#8220;lived to serve others and were dedicated to the daily mission as if they were working for God himself,&#8221; according to their battalion commander, Lt. Col. Paul Paolozzi.

They were assigned to the Fort Lewis, Wash.-based 864th Engineer Combat Battalion (Heavy).

During Saturday&#8217;s memorial service, speakers told of how Walker and Davis shared a devotion to life and a dedication to taking care of the soldiers assigned to Task Force Pacemaker.

&#8220;He was the epitome of a self-made man,&#8221; said Paolozzi later in the service, explaining that Davis had to raise himself when he turned 14, then enlisted in the Army and married his high school sweetheart, Amanda.

Paolozzi, who was injured in the attack, spoke of Davis as an &#8220;aide, confidant, assistant and, routinely, a voice for the soldiers&#8221; who could be counted on to suggest ways to provide a little extra for task force soldiers, such as bringing snacks and cold drinks to the construction crews working on the 76-mile road.

As the unit&#8217;s public affairs officer, Walker had worked to get those same construction crews &#8212; and all of the soldiers in the task force &#8212; recognized for their months of work.

A few days before she died, two of her photos ran in Stars and Stripes&#8217; Mideast and Pacific editions and less than a week earlier, one of her stories ran in the Combined Forces Command Afghanistan magazine Freedom Watch.

Shortly before her death, Paolozzi told Stars and Stripes that Walker was probably the &#8220;best S-5 [staff civil affairs officer] he&#8217;d seen in his entire career.&#8221;

Though all agreed that her performance on the battalion staff was exceptional, Walker would have preferred to have been out in the field in a leadership position.

Though neither Walker nor Davis can be out with the soldiers any longer, Paolozzi said, their spirits will live on.