Emotion shows through on the face of Sgt. J. Jacobs, 33, of Bloomington, Ind., as he listens to the names of friends during a ceremony to remember fallen 2nd Stryker Cavalry Regiment soldiers at Vilseck on Tuesday. (Seth Robson / S&S)

Emotion shows through on the face of Sgt. J. Jacobs, 33, of Bloomington, Ind., as he listens to the names of friends during a ceremony to remember fallen 2nd Stryker Cavalry Regiment soldiers at Vilseck on Tuesday. (Seth Robson / S&S) Wounded warriors at a remembrance ceremony in Vilseck on Tuesday were a visible reminder of the sacrifice made by 2nd Stryker Cavalry Regiment troops in Iraq. (Seth Robson / S&S) 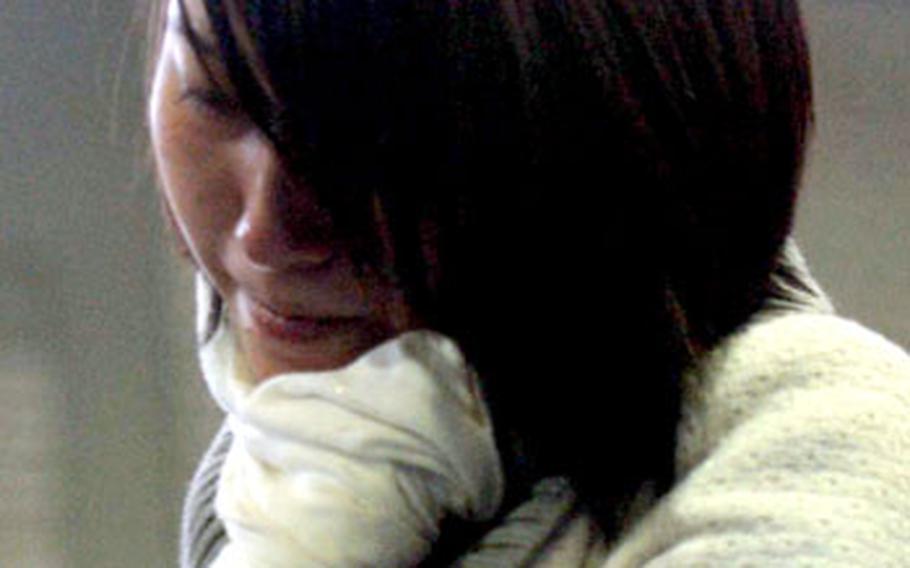 Lien Tran looks at a photograph of her husband, Staff Sgt. Du Tran, 30, who was killed in action while serving in Iraq. (Seth Robson / S&S) VILSECK, Germany &#8212; Remember. It was a word repeated each time a photograph of a fallen 2nd Stryker Cavalry Regiment soldier flashed on the screen at a packed Memorial Fitness Center at Vilseck on Tuesday morning.

Twenty-five of the more than 3,500 Dragoons who deployed to Iraq from Vilseck in August 2007 were killed in action during the deployment along with four soldiers from other units assigned to the regiment in Iraq.

Positive recollections of the fallen accompanied their portraits.

"Mentally tough and never backed down &#8230; faithful to his brothers to the end &#8230; the rock others depended on &#8230; a dependable and compassionate friend &#8230; unwavering courage &#8230; great father, husband and close friend &#8230; remembered for his courage and sacrifice" were some of the descriptions of those who made the ultimate sacrifice.

"They all fought alongside their brothers and sisters in places like Hadar, Karkh, Abu Ghraib, Sadr City, and Baqouba," the 2nd Cav commander, Col. John RisCassi told family members and fellow soldiers.

"They traveled to a foreign and desolate land to bring stability and security to those most in need. They will inspire generations of Americans to come," he said.

The 2nd Cav chaplain, Maj. Samuel Lee, told those gathered that they should celebrate the lives of the fallen Dragoons.

"It is sad they are not here with us physically. No doubt about it. But if you heard the contributions and remarks from their friends and family about who they were and how they died, let me tell you, their influences and legacies are still alive," he said.

Sgt. J. Jacobs, 33, of Bloomington, Ind., had tears in his eyes as he listened to the names of close friends he&#8217;ll never see again.

His sling-bound arm was a reminder of those Dragoons still fighting the war, months after they came home.

Jacobs was wounded by a roadside bomb in September 2007. Since then he&#8217;s had four surgeries on his shoulder and had several teeth replaced. He suffers from traumatic brain injury and post-traumatic stress disorder and wears a hearing aid, he said.

"I was part of Ghostrider Company, 3rd Squadron. Four of my friends were killed," he said. "It was hard enough when it happened, but to hear my friends&#8217; names was pretty hard. I was just overwhelmed with emotions."

Another with tears in her eyes as the names were read was Lien Tran, who stood staring at a picture of her husband, Staff Sgt. Du Tran, killed by a roadside bomb in Baqouba, Iraq, on June 20.

Tran said she came to Vilseck to gain closure.

Carl Dozier, whose son, Staff Sgt. John Dozier, was killed fighting for the regiment in Iraq, traveled to Vilseck from Chesapeake, Va., for the remembrance ceremony.