Fallen 1st AD soldier had found a home in Army 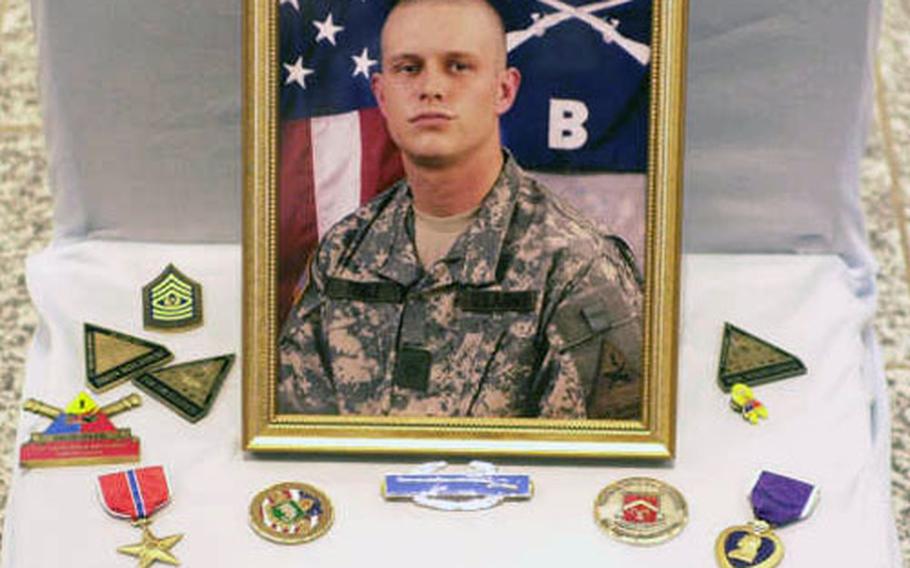 His Purple Heart and Bronze star, along with his combat infantry badge and coins left by mourners surrounded the photo of 1st Armored Division Spc. Brett Tribble after his memorial Wednesday. Tribble was killed last week by an explosion in Iraq. (Terry Boyd / S&S)

BAUMHOLDER, Germany &#8212; If there is such a person as Everyman, then Brett Tribble was, in a way, Everysoldier.

Tribble came in quietly, looking for a better life.

&#8220;His father said he joined up without telling anyone,&#8221; said 2nd Lt. Joshua Adelman during Tribble&#8217;s memorial service Wednesday. Though he dropped out of high school in Texas, he got his general educational development degree, Adelman said. He tried a few &#8220;trial jobs, but found nothing interesting,&#8221; he said.

That all changed when he joined the Army.

It was a fit, with Tribble finding discipline and people to teach him.

&#8220;Someone to mold him into a soldier,&#8221; said Staff Sgt. Joshuwa Tucker, his squad leader with Company B, 2nd Battalion, 6th Infantry Regiment of the Baumholder-based 2nd Brigade of the 1st Armored Division.

Tribble once observed that being in the Army &#8220;was like going to the gym and getting paid for it,&#8221; Adelman said.

Tribble was aware of the danger, and asked that no one feel sorry for him if the outcome was the same as so many who&#8217;d preceded him, according to those who remembered him. For soldiers, &#8220;dying is just as real as breathing in time of war,&#8221; Tucker said.

Tribble, 20, a gunner from Lake Jackson, Texas, died Friday after an improvised bomb exploded near his Humvee during fighting in Ramadi, an insurgent stronghold about 60 miles northwest of Baghdad. His unit had moved up May 26 to Iraq from Kuwait where the 2-6 and other 2nd Brigade units had been held as a reserve force in Kuwait since last November.

Tribble was intelligent, with a plan to get his degree in criminal justice, then return to Lake Jackson as a police officer, said Maj. Jeanine White, 2nd Brigade rear detachment commander.

Tribble is survived by his father, Alan, of Angleton, Texas; his mother, Traci, of Lake Jackson; and his son, Clint Alan.