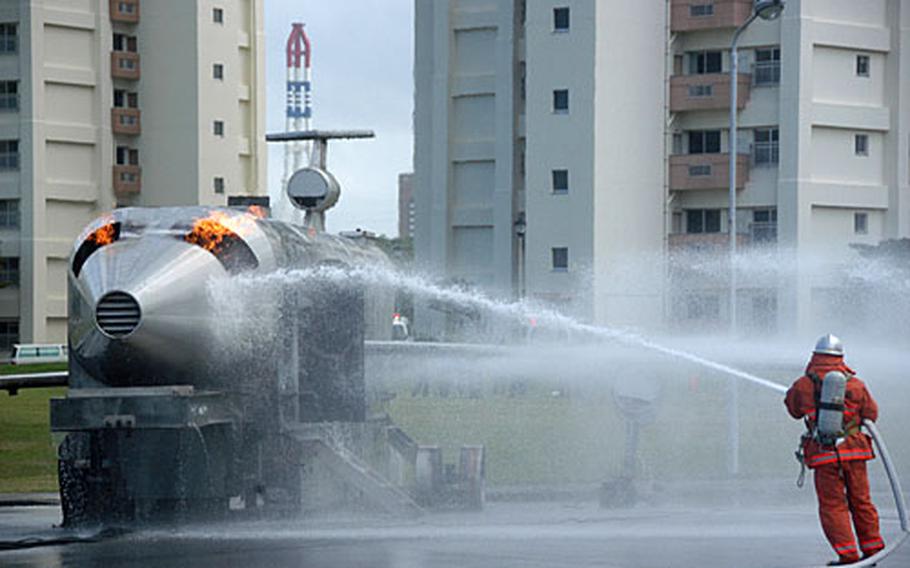 A firefighter attacks a blaze in an aircraft mock-up at Camp Kinser, Okinawa. (Will Morris / S&S)

A firefighter attacks a blaze in an aircraft mock-up at Camp Kinser, Okinawa. (Will Morris / S&S) 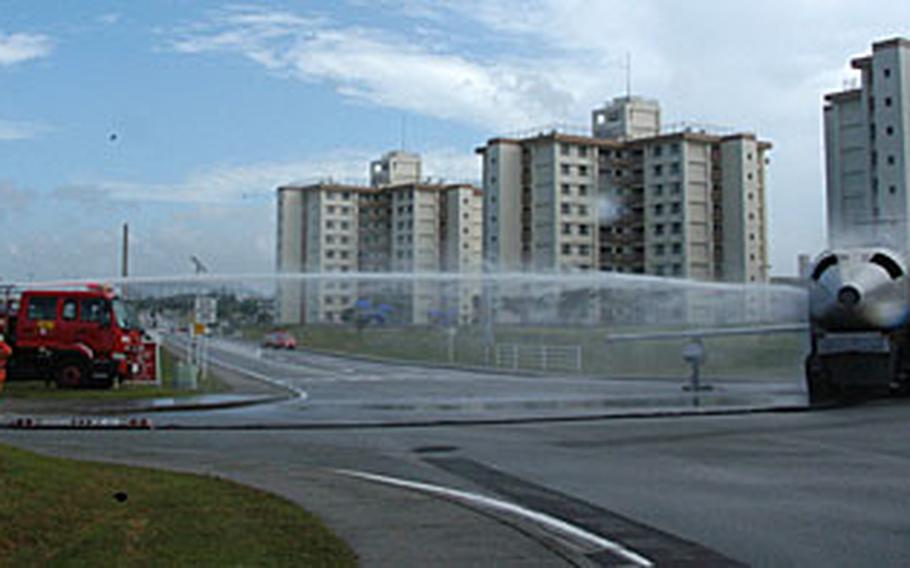 Marines and Okinawan officials staged the exercise to practice how to respond together to an aircraft that has crashed off base. ()

An aircraft mock-up, normally used by the Air Force to train firefighters at Kadena Air Base, was transported to Camp Kinser, where it was set ablaze at an intersection near a base housing complex. While Okinawan and base firefighters arrived at the scene and immediately started attacking the fire, other emergency workers treated aircraft crewmembers and civilians &#8220;injured&#8221; in the crash.

Once hose crews knocked down the fire and evacuated the injured, Okinawan and military police set up security around the scene.

However, a key part of the training, which couldn&#8217;t be seen by observers, was the communication between Japanese and U.S. units. Okinawa officials said they had some challenges communicating with their American counterparts through translators, but were successful in the end.

Col. Donald Wayman, G-3 officer for Marine Corps Bases Japan, said the training was an example of &#8220;the Marine Corps and the local community working together toward a common goal.&#8221;

Thursday&#8217;s training was a continuation of exercises that have been taking place between Okinawan and Marine Corps officials since an off-base helicopter crash in 2004.

Military officials later said the cause of the crash was attributed to a failure to install a cotter pin during routine maintenance of the helicopter.

In June, Marine Corps and Okinawan officials held a table-top exercise during which they simulated their response to a crash. They pledged to hold real-life training together.

During Thursday&#8217;s exercise, military and Okinawan police set up security around the site together.

Wayman said he and others involved in the exercise need to review after-action reports before commenting on how it could be improved.