Faithful at Yongsan gather for a blessing of the pets 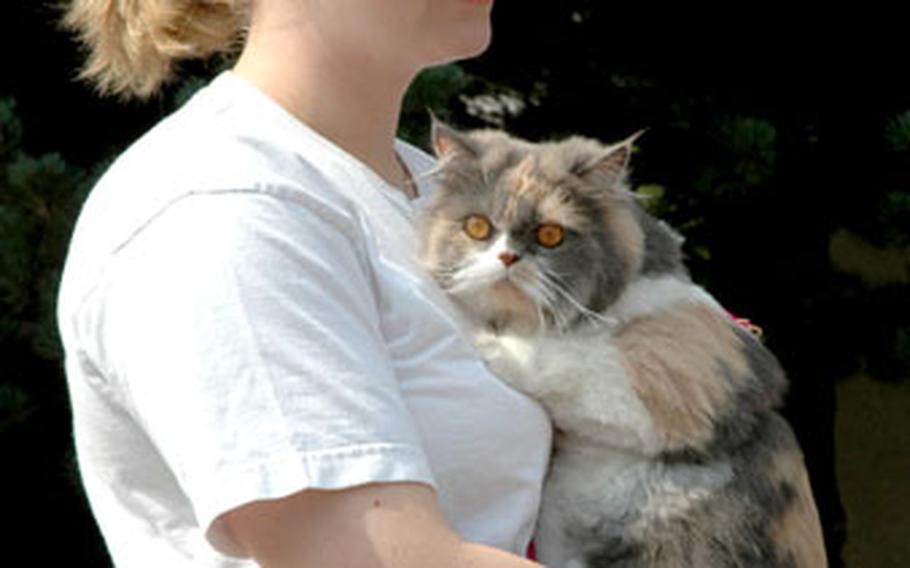 YONGSAN GARRISON, South Korea &#8212; First Lt. Jill Wagoner&#8217;s cat Lex has a behavioral problem. The 1-year-old Persian is perfect for cuddling but she has a bad habit of mistaking the corners of rooms for her litter box.

So Wagoner brought Lex and her other cat, Flash, to the South Post Chapel on Saturday morning to share in a blessing for pets and to ask for a little extra help with Lex, the U.S. 8th Army Troop Command member said with a smile.

About two dozen dogs and cats &#8212; and their owners &#8212; joined Lex and Flash at the ceremony to receive a blessing. The event was the first of its kind at Yongsan in recent memory, said Col. Gary K. Sexton, the chaplain for the 18th Medical Command.

&#8220;This is a unique thing,&#8221; he said, noting that the gathering was meant to acknowledge the wonders of nature and creation as much as the pets so many people bring into their homes. &#8220;There&#8217;s an important responsibility we have as stewards of creation. There&#8217;s a spiritual aspect (with pets), not to be worshiped, but cared for.&#8221;

Owners said they came to show thanks for their four-legged family members and to pray for their long and healthy lives.

Navy Comm. Dan Hurley, a member of Command Naval Forces Korea, came with his daughter, Sarah, 9, and their golden retriever, Schilling. Hurley, in a Red Sox cap, explained he got the dog just after the Boston team won the World Series in 2004 and he named the newest member of the family after pitcher Curt Schilling.

Schilling is off to a good start. He watched as a few other dogs got a little too close and squared off, briefly trapping a young boy in their lunges. The boy was bitten on the arm but medical personnel said he was doing fine. The vet staff determined vaccinations were up to date.

Danica Veringo, a teacher at Seoul American Middle School, came without a pet but had a hard time letting go of a Shih Tzu that was abandoned recently and was looking for a new home with the help of staff from the Yongsan Veterinary Clinic. &#8220;I want her,&#8221; Veringo said repeatedly. &#8220;She&#8217;s too cute.&#8221;

Veringo moved to Korea about six weeks ago, so she thought she&#8217;d better wait and see how her work schedule played out before committing to a larger family.