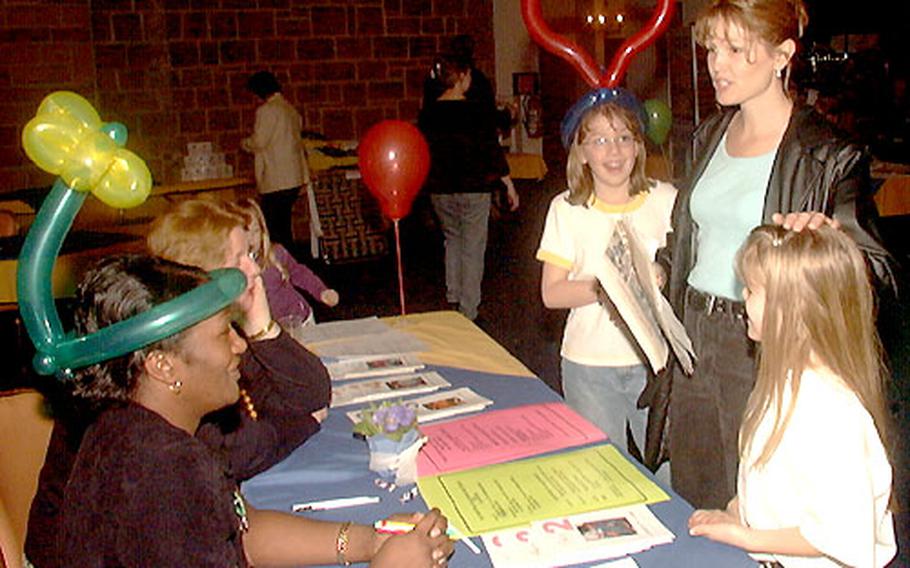 Jeannette Sirois and her three daughters attend a deployment exposition for family members, sponsored by the 221st Base Support Battalion in Wiesbaden, Germany. With her, from right, are daughters Rebecca, 8, Christina, 10, and Samantha, 3, who is hiding behind Sandy McGillivray, one of the women at the table. Sirois is consulting with Undrea Ravenel (wearing a balloon hat) and McGillivray about school plans. (Kevin Dougherty / S&S)

WIESBADEN, Germany &#8212; Interest in a recent deployment fair in Wiesbaden ran high well before the balloon-twisting clown on a unicycle rolled across the community center&#8217;s carpeted floor.

But organizers were taking no chances, so they recruited the services of Filou the Clown. He achieved his objective, which was to draw further attention to a fair intended to highlight services available on the home front, especially for deployed soldiers and their families.

&#8220;It&#8217;s a great opportunity to get information,&#8221; Jeannette Sirois said as the clown pedaled by, drawing the attention of her three young daughters.

The response to last month&#8217;s fair was so great that the 221st Base Support Battatlion plans to stage a similar one Wednesday in nearby Dexheim. Billed as a Soldier and Family Readiness Expo, the event will be held in the Dexheim gym from 11 a.m. to 4 p.m.

At the Wiesbaden expo, soldiers, spouses and children talked with representatives of various community organizations. People migrated from one table to the next, asking questions and collecting brochures and fliers.

One of the table talkers in the immediate vicinity was Bob Williams, a financial counselor. Money concerns can loom large in any household, making it imperative that deploying soldiers, single as well as married, review their finances before heading over the horizon.

At the time, Sgt. Carl Merchant didn&#8217;t know when or if he was heading down range, but he stopped by Williams&#8217; table for financial advice, and for good reason. Assigned to the 123rd Main Support Battalion in Dexheim, Merchant is his unit&#8217;s liaison to the family readiness group.

&#8220;I was in another world,&#8221; Warrant Officer 1 Steven Straughter sighed as he thanked Saab for the brief backrub.

For Saab, giving massages is therapeutic, too.

That&#8217;s what 20-year-old Judith Jimenez was counting on as she sought advice pertaining to her 3-month-old son, Damian.

Jimenez is a single mother. She also is a private in the Army, a logistics person attached to the 159th Medical Company. While Jimenez is away, Damian will stay with her parents in Texas.

Aside from health care issues, Jimenez came to the expo to learn more about how her son will develop while she&#8217;s gone and the particulars of giving her parents power of attorney.