'Failure is not an option': Infantry officer becomes first woman in her division with EIB 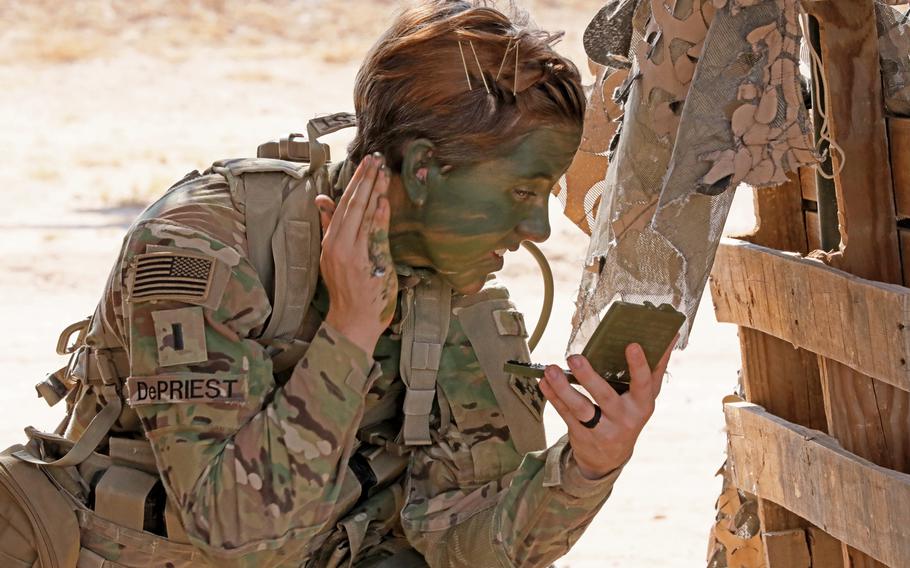 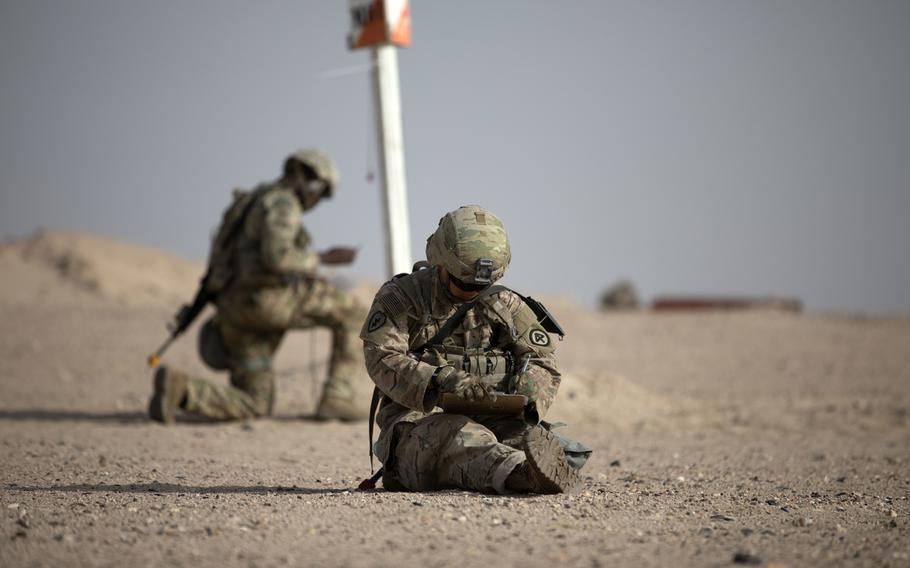 Staff Sgt. Bi Chen, a squad leader with 2nd Battalion, 113th Infantry Regiment, New Jersey Army National Guard, plots a point on his map during Expert Infantryman Badge testing at the Udairi range in Kuwait on Monday, May 27, 2019. Chen and 127 U.S. Army, Army National Guard and Army Reserve Soldiers demonstrated their ability to navigate from one point to another using a map and compass, one of 34 events EIB candidates must complete before being awarded the badge. (Justin Hardin/U.S. Army) 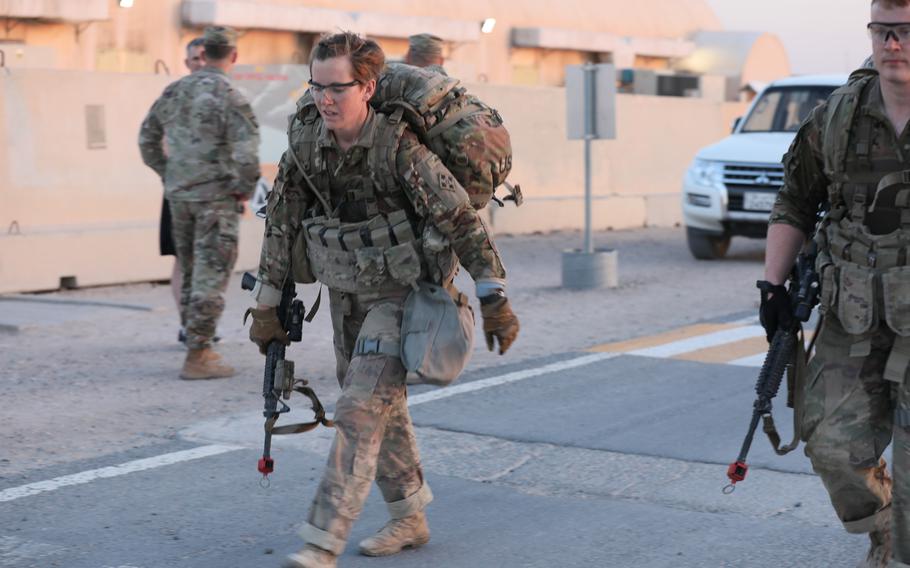 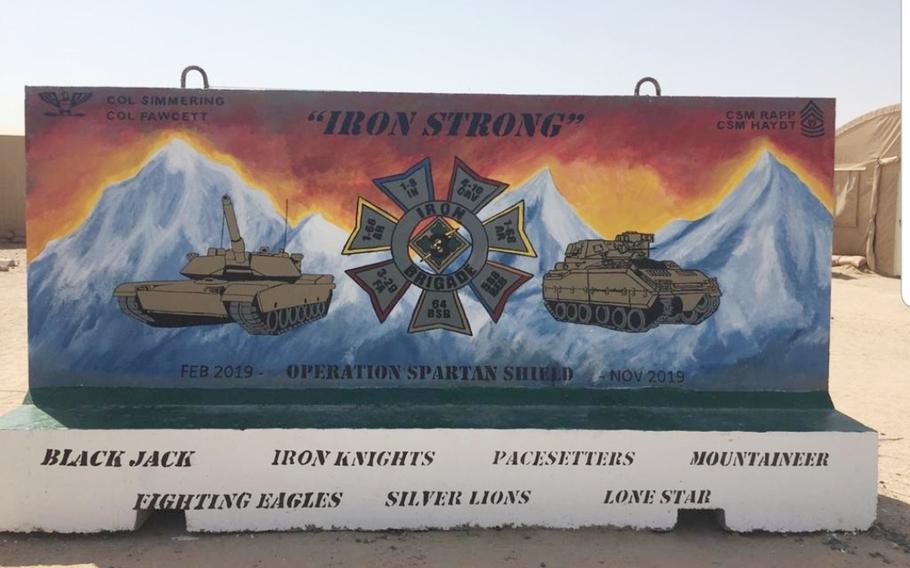 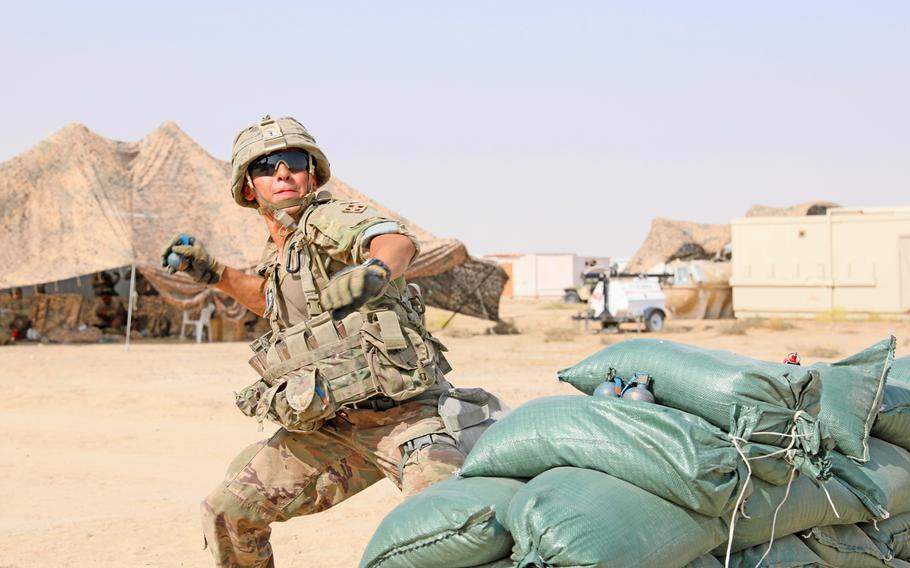 Army Spc. Ryan Patel, an infantry soldier with 1st Battalion, 8th Infantry Regiment, 3rd Armored Brigade Combat Team, 4th Infantry Division, prepares to throw a practice M67 fragmentation grenade as part of Expert Infantryman Badge testing at Camp Buehring, Kuwait, on Wednesday, May 29, 2019. EIB candidates were required to throw the grenade at a single enemy silhouette at a range of 35 meters, with the grenade exploding within a five-meter radius in order to receive a ?go.? (Liane Hatch/U.S. Army)

Despite the desert heat, dozens of soldiers in Kuwait last week earned the prestigious Expert Infantry Badge, including one of the first women to receive the decoration since women began making inroads into combat arms fields previously closed to them.

An initial field of over 300 soldiers who started training for the weeklong skills test at Camp Buehring was narrowed to fewer than 180, including three women, who made it to the first official event — a fitness test — on May 27. About one-third of them earned the EIB six days later, after completing a 12-mile ruck march and final test event earlier that morning, the Army said in a statement this week.

1st Lt. Shelby DePriest of Fort Carson, Colo.-based 1st Battalion, 8th Infantry Regiment, 3rd Armored Brigade Combat Team, 4th Infantry Division, was the only woman among the 61 finishers and the first woman in her division to earn the special skills badge since the unit began incorporating female infantry officers into its ranks less than two years ago.

DePriest had told her mentors that “failure is not an option,” which kept her going, she said, even though it was tough to stay motivated through early mornings and late nights of training and testing.

“I had to live up to that promise,” said DePriest, who serves as a operations battle captain. “I was absolutely terrified to go back to my office without the EIB.”

She was one of just 27 from her brigade to earn the badge — another 34 from seven other units in the Central Command area of responsibility also qualified as infantry experts. The 3rd ABCT hosted the test while deployed to Kuwait.

The coveted special skills badge, which the U.S. Army created during World War II to honor infantry troops, can play a significant role in a combat arms soldier’s career progression. Rigorous tests, made up of nearly three-dozen pass or fail events, are conducted annually throughout the service.

Conditions in Kuwait were “extremely harsh,” including 12-hour days in 110-degree heat during two weeks of training and the weeklong test, officials said.

“This EIB was harder, from a conditions standpoint, than any other that I have seen or participated in,” said Command Sgt. Maj. Timothy Chrysler, senior NCO for the 8th Infantry Regiment’s 1st Battalion, in the Army’s statement.

Sgt. Alan Garcia, an infantryman who earned the badge last week, had some advice for others: “If you’re going to go for your EIB, I recommend not doing it in Kuwait.”

Still, the pass rate — about 35% — was about double the average across the Army since new standards were introduced last fall, a review of Army data from September through early March shows.

Officials at Fort Benning, Ga., which runs the testing program, could not immediately say how many U.S. women in total had passed the test, but in late 2017 the first six American women reportedly earned the badge at Fort Bragg, N.C.

Female U.S. troops only recently became eligible to wear the badge after the Pentagon struck down regulations barring them from infantry jobs over three years ago.

Army National Guard Maj. Michelle Roberts is believed to have been the first woman to pass the test back in 2011. She only received a certificate of completion since the badge is reserved for soldiers in infantry or Special Forces job, an Army statement said at the time. At least three women in South Korean infantry units who earned the EIB since 2014 were eligible to wear it, however.

Since January 2016, the Army has transferred more than 1,000 women into combat arms specialties and at least 500 now serve in every one of the service’s active brigade combat teams, down to the company level, Army G-1 Lt. Gen. Thomas Seamands said in a statement late last month.

DePriest commissioned in 2017 after completing ROTC at Western Illinois University, where she was an art major, and arrived at Fort Carson in January following initial training. She welcomed the new opportunities for female soldiers.

“The Army’s taking the right steps,” she said. Regardless of gender, “they just want leaders to be competent.”

For her, earning the EIB was a “stepping stone” that validated her readiness to take on the job of platoon leader, for which she’s been groomed and coached for over the past 19 months, she said. She expects to take charge of her first platoon later this month.

“I’m finally getting my time to shine,” she said. “It’s a really good moment.”

Shortly after earning the badge for her infantry skills, she got her first Army Commendation Medal, this one for a different set of skills — her artistic abilities — employed to “brighten up Kuwait” with a unit mural on one of the base’s t-walls.

“I’m bringing a little flair to the infantry world,” she said.