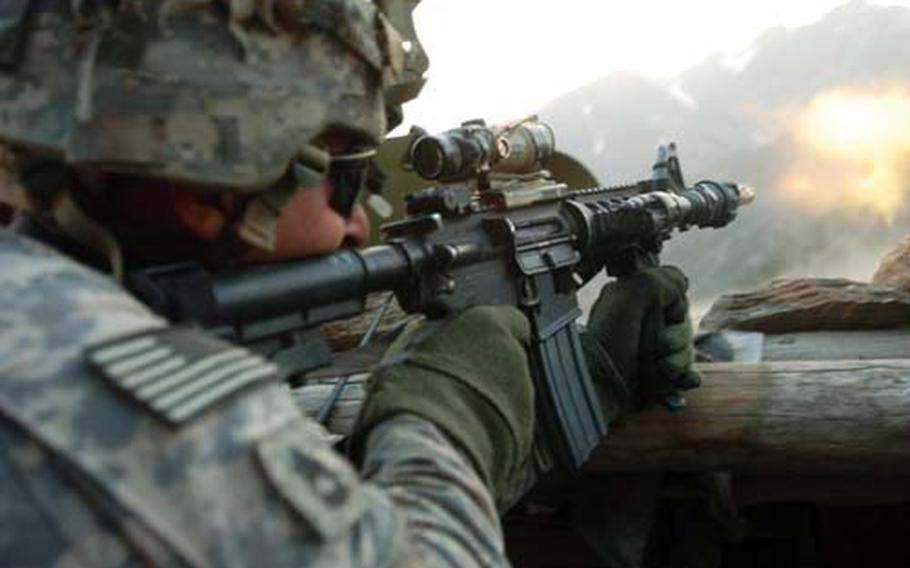 A 1st Battalion, 32nd Infantry Regiment soldier fires an M4 rifle during a battle with insurgent forces in Barge Matal, Afghanistan, in July. While the military has taken steps to treat mental health disorders stemming from combat, there are no attempts being made to count the number of soldiers who visit combat stress clinics or track their long-term mental health. (Courtesy of the U.S. Army)

WASHINGTON &#8212; With an estimated 20 percent of U.S. servicemembers returning from war zones suffering from post-traumatic stress disorder, a burgeoning suicide rate in the ranks and occasional murder or other extreme outbursts of violence, the Pentagon is scrambling to grapple with the mounting psychological fallout from America&#8217;s wars in Iraq and Afghanistan.

Combat stress clinics have been set up near the front lines. Troops in training are learning how to gird themselves against mental troubles. Officers are required to watch for signs of suicide risks among their subordinates.

But in a vast military organization obsessed with metrics and measuring every aspect of its performance, experts say there is one glaring gap: The Pentagon has no system in place to evaluate whether its downrange crisis interventions are actually working.

At the stress clinics, or "restoration centers" as the military calls them, servicemembers experiencing acute mental trauma can get a few days&#8217; respite away from the war and consult with nurses, psychologists and psychiatrists. The only outcome the Army measures is what percentage of soldiers are able to quickly return to the front lines: 97 percent.

"[Downrange] the mental health professional&#8217;s primary mission is to get people back to duty," said Dr. Mardi Horowitz, a psychiatrist and PTSD authority who helped define the disorder in the 1970s. "It&#8217;s not an individual&#8217;s health."

There are no attempts being made to count the number of soldiers who visit the combat stress clinics or track their long-term mental health &#8212; an omission, mental health experts say, that means the military has no way of knowing about subsequent discipline problems, violent behavior or suicide attempts that might be traced back to battlefield stress.

Even at the Defense Center for Excellence in Psychological Health and Traumatic Brain Injury, created in 2007 to spearhead the Pentagon&#8217;s mental health efforts, no official in the research, surveillance or program evaluation divisions was able to answer questions posed by Stars and Stripes about the efficacy of downrange mental health interventions.

"None of the folks at [the center] are well-versed enough in this area," said spokeswoman Judith Evans.

Nor are there programs in place to attempt to answer other fundamental questions about the combat stress clinics, such as the proportion of soldiers who seek treatment who are eventually discharged from the military because of mental disabilities.

Such concerns about the perceived stigma of seeking psychological help, as well as widely-held fears among servicemembers that they will suffer adverse career repercussions if they admit to experiencing battlefield mental trauma, remain major obstacles to treatment, military leaders have often acknowledged.

"There are some institutional policies that put a stigma in place that makes it difficult to get care," said Capt. Paul Hammer, director of the Naval Center for Combat and Operational Stress Control.

The workings of the combat stress clinics came under scrutiny in May after a soldier shot up a Baghdad clinic where he had earlier been treated, killing five fellow servicemembers in an incident that ranked as the deadliest instance of soldier-on-soldier violence in the Iraq war.

A detailed Army report about combat mental health issues, sparked by that deadly incident, is currently in the hands of commanders at Multi-National Force Iraq headquarters and is expected to be publicly released soon.

To be sure, the majority of servicemembers who deploy downrange do not suffer severe mental health issues or explode into violence. And Pentagon officials contend that since such a high proportion of troops are able to return to duty soon after visiting combat stress clinics, what goes on at the centers must be working, even if they haven&#8217;t measured it.

The goal in theater is "helping people function as best you can to preserve the fighting strength of the force &#8230; helping them deal with what they need to deal with," said Hammer.

That warfighting priority is reflected in the fundamental orientation of the Combat and Operational Stress Control program &#8212; the military&#8217;s formal name for its mental health units, including the stress clinics. It is a commander&#8217;s program, in which mental health professionals make recommendations, but "ultimately it&#8217;s a leadership decision" whether to send a soldier back to the front, said Lt. Col. Edward Brusher, deputy director of the Army surgeon general&#8217;s behavioral health office.

Combat stress reactions are not automatically considered a medical problem. Only when there is a severe diagnosable psychiatric condition &#8212; such as PTSD, depression or schizophrenia &#8212; does evacuation from the theater become a medical decision. Otherwise, a commander can overrule a recommendation to evacuate, according to Maj. Tim Carroll, the officer in charge of the Army&#8217;s mental resiliency training office.

The commander might instead agree that the servicemember "can&#8217;t go back out and kick down a door" and but can remain in theater to do administrative functions, he said.

Hammer said that often "what we&#8217;re dealing with in theater is symptoms" that many times "don&#8217;t fulfill the criteria for PTSD."

Some experts criticize the military for using criteria that is too strict in diagnosing PTSD.

A 2008 study by the RAND think tank concluded that the military could be underestimating the number of veterans who return with the condition, suggesting that at least one in five soldiers deployed to Iraq and Afghanistan suffers from PTSD.

Civilian psychiatrists who specialize in PTSD said keeping servicemembers in the field who are highly symptomatic of PTSD could put them at risk for being re-traumatized and have significant long-term consequences.

"A great deal has been learned but seems to be forgotten with each war," Horowitz said. "And not because it&#8217;s not written down but because of the people involved with remembering."

RAND found in the wide-ranging 2008 study assessing the cognitive needs of Iraq and Afghanistan veterans that quality of care was absent from the discussion within the Department of Defense.

"One criticism we made of DOD is they don&#8217;t currently do a lot of self-evaluation within their medical system," said Lisa Jaycox, one of the study&#8217;s lead authors.

Yet studying the effects of mental health treatment in a combat zone is difficult, Pentagon officials reply.

"That&#8217;s the crux of the problem," said Lt. Col. Paul Bliese, chief of military psychiatry at the Walter Reed Army Institute of Research.

With the Army&#8217;s other mental health programs, such as mental resiliency training, researchers can design experiments with randomization and control groups that "allow us with precision to identify the effects of what we&#8217;re doing," Bliese said. "We don&#8217;t have the ability to do that in theater."

The Defense Department does send a Mental Health Assessment Team to both Iraq and Afghanistan every one to two years to assess the overall mental health of servicemembers. The team surveys troops about morale, combat exposure and the accessibility of mental health resources.

But Bliese, who heads the MHAT, said those assessments track broad trends and are more about access to resources, preventative measures and resiliency than evaluating the effectiveness of treatments that individual servicemembers receive.

"A lot of what you do that is effective is difficult to pin down in a data element that you could actually grab," said Hammer.

Adopting a new coping strategy"Resiliency" is the new buzzword in the realm of military mental health.

"Our attitude has changed significantly," Capt. Paul Hammer, director of the Naval Combat and Operational Control Center, said. "We&#8217;re much more aware of how important mental health is for people&#8217;s ability to function."

At the start of the Iraq and Afghanistan wars, troops received only brief mental health training before combat deployments. Now the concept of resiliency is becoming a regular part of training from day one. Beginning in October, the first week of basic training will include anti-stress programs aimed at building coping skills. Formally called Comprehensive Soldier Fitness, the effort will expand to include all levels of Army education.

Studies suggest that mental toughness can be taught in the classroom. However, these initiatives have largely focused on pre- and post-deployment, teaching resiliency skills first for prevention and then for reintegration.

The Army is adapting the idea of resiliency for downrange, reflecting the changing ways mental health professionals are used in the field.

"The model is not to sit there and wait for people to show up. We&#8217;ve moved away from that completely," said Lt. Col. Paul Bliese, chief of military psychiatry at the Walter Reed Army Institute of Research. "The behavioral health officer needs to be actively involved in the lives of soldiers in a unit."

Army medics now are trained to spot combat stress and help a soldier cope. Mental health professionals also conduct periodic psychological "debriefings" with a unit &#8212; at four and eight months into a deployment, for example &#8212; and also do them in response to a critical event. The debriefings last about an hour and allow servicemembers to talk about their reactions to stressors, the goal being to address issues before they can fester. Walter Reed officials recommend the debriefings, but they are not mandatory.