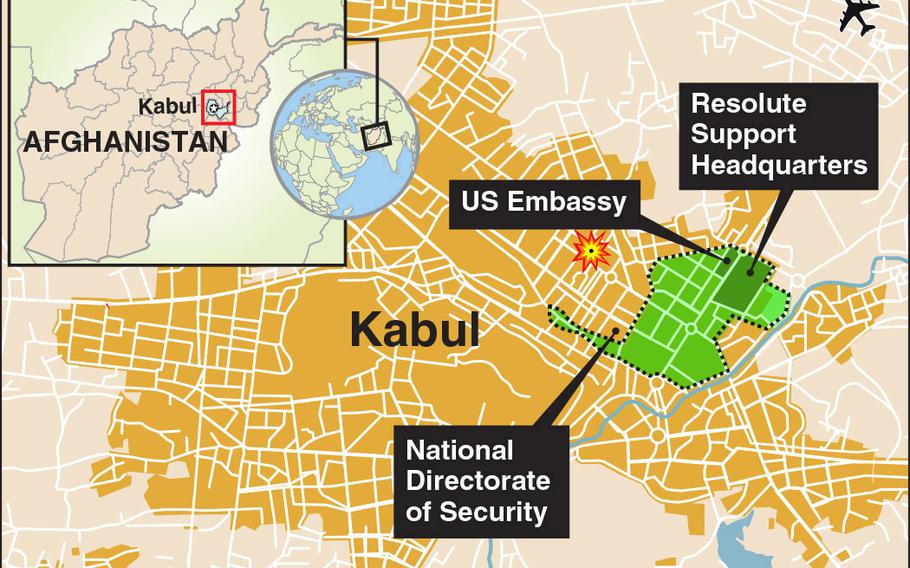 The blast symbol shows where Kabul police foiled a suicide bombing attack on civilians who had set up a blood collection drive in a park about one mile from the U.S. Embassy and NATO mission headquarters. (Bev Schilling/Stars and Stripes)

KABUL, Afghanistan — Kabul police foiled an attempted attack on civilians gathered for a blood collection drive in a park about a mile from the U.S. Embassy and NATO headquarters, officials said Monday.

The blood drive Monday was organized for the victims of a deadly twin bombing last week that killed dozens of Afghans, including nine reporters who had rushed to the scene. Many others were wounded in the dual bombing, which was claimed by the Islamic State affiliate in the country.

A suicide bomber was walking toward a tent in Shar-e Naw Park where blood donors had gathered, when police ordered him to stop shortly after 11 a.m., police spokesman Hashmat Stanikzai said.

“As police started shooting at him, he detonated the explosives,” he said. There were no other casualties.

The park is in a busy district of the city that is home to many restaurants and shops, as well as several fortified compounds housing international aid groups and government agencies.

Activists said on Sunday that the blood donations would support Afghan security forces and civilians. Kabul, once a relatively safe city in the beleaguered country, has become increasingly dangerous in recent years as insurgent groups have conducted several successful attacks.

The latest attempt comes as Taliban guerrillas are expected to intensify their activity as part of their spring offensive.

Also on Monday, a blast went off inside a school in a refugee settlement in the capital of eastern Logar province, damaging the building which also served as a voter registration center.

It’s among the latest in a string of threats and attacks against election facilities. It detonated before children or teachers arrived, and no one was hurt, local media reported.

A day earlier, a bombing in Khost province killed 17 and wounded 37 others at a mosque that was serving as a voter registration center in a busy part of the provincial capital.