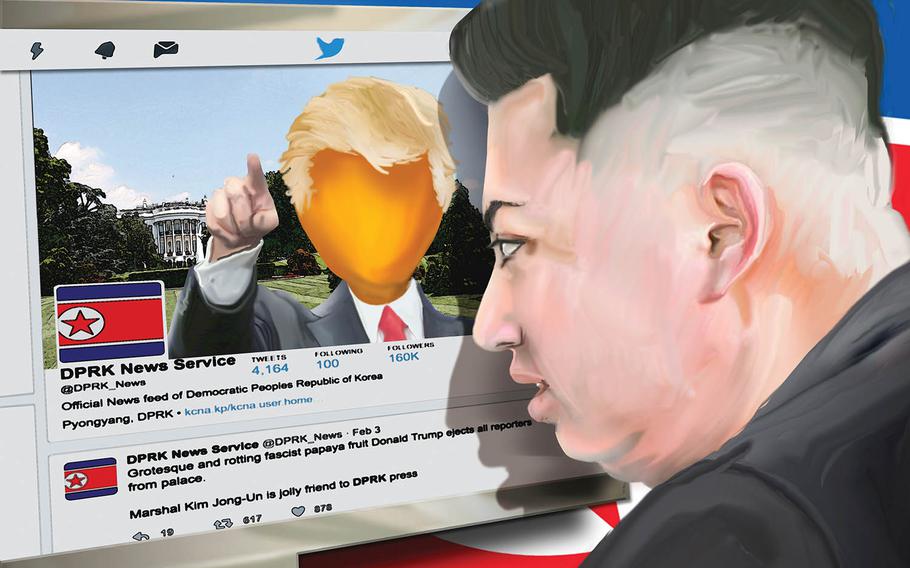 Illustration by Bev Schilling/Stars and Stripes ()

SEOUL, South Korea — North Korean media perfected the art of “fake news” long before it became a buzzword in Washington.

So how can you tell the difference between fact and fiction when it comes to the so-called Hermit Kingdom?

Two self-described “jerks from the United States” have put that to the test with a Twitter account called DPRK News Service, fooling many journalists and others who believed the tweets come from the North Koreans.

The site mimics the exaggerated and belligerent tone of North Korea’s official news organizations, which are government mouthpieces, as a form of commentary, or just as a joke.

This is, after all, a country that reportedly banned sarcasm, an idea that became a topic for @DPRK_News.

See if you can tell which of the following statements came from the state-run Korean Central News Agency, famous for its hyperbole, and belligerent rhetoric, and which is from the parody site:

•  “Obama should live as a monkey in an African natural zoo licking the breadcrumbs thrown by spectators.”

The crude racist rant against Obama came from the North’s official press.

The mention of Trump was the giveaway. North Korea has issued some indirect statements clearly aimed at the new U.S. administration but hasn’t directly targeted Trump, perhaps because it doesn’t want to engage in a hostile manner until his policies become clear.

The DPRK News Service, on the other hand, has taken on Trump with full force.

Patrick Popehat, who studied Russian and the Soviet Union in the 1980s, started the Twitter account in 2009 to keep busy while recovering from a badly sprained ankle.

“The initial point was just to see how far I could get away with a prank, informed by years of reading communist news services,” he said in an email responding to questions.

A Norwegian news site was the first to take the bait, reporting that North Korea was threatening war with Cyprus, based on one of his tweets.

Popehat stopped posting after revealing the joke, but took it up again later in collaboration with his friend Derrick Popehat.

Their names, of course, are pseudonyms that they adopted from another satirical legal blog they were writing for on Twitter called Popehat. The duo operates anonymously out of an abundance of caution because of the provocative nature of the tweets.

Patrick, who describes himself as an attorney in the southeastern U.S., said the closest he has come to the divided peninsula was dating a Korean girl in high school.

“I bring knowledge of communism and sarcasm,” Patrick said. “Derrick brings knowledge of Asian cultures and a less misanthropic sense of humor.”

It’s easy to mistake the hyperbole and socialist terminology for the real deal, although the authors say they are always surprised when their tweets are reported as news.

Patrick recounted one tweet quoted by then-Fox News host Greta Van Susteren: “We told her through Twitter she was wrong, that it was written by jerks in the United States. She doubled down, claiming ‘some say’ the account is fake.”

He ended up having to prove to her the account was fake by saying it would tweet “U.S. Deputy President Biden derided as ignorant hornswoggler” — and it did.

Patrick wants to make clear that he likes the former vice president: “He’s not an ignorant hornswoggler, but that’s what the North Koreans would call him.”

“The usual ritual for fooling a media figure was to sentence the offending figure to a grisly death,” Derrick said.

Derrick, a data analyst with an MBA, blames the media’s obsession with scoops and clickbait, and says that the site’s parody content can be determined by a quick web search.

“From a satirical standpoint, I think as long as one is coming from a motive to entertain instead of deceive, things will be OK,” he said.

Ken White, a former federal prosecutor who founded @Popehat, said Patrick has “a remarkable ability to keep a straight face in his writing.”

He said satire was a way to keep people on their toes.

“The journalists on whom Patrick and Derrick have counted coup … will be careful next time,” he said.

The duo took a break from posting last year. “Honestly, joking about a murderous genocide regime gets tiresome, even if you have a black sense of humor,” Patrick said.

They started up again to make sure the U.S. presidential campaign got proper coverage.

“The U.S. election was too good to pass up and needed a North Korean perspective, even if the DPRK wouldn’t provide it,” Patrick said, adding that he voted for a third-party candidate.

A few topics are off-limits: tourists or hostages detained by the North Korean regime, human-rights abuses and tragedies such as the deadly flooding that hit the country last year.

“We’ve changed tone several times; at first largely fawning and complimentary and later properly insulting — I think the trigger was some stuff he said in a debate about North Korea, that usually does it — and back to complimentary after North Korea’s ‘endorsement.’ Now we’re back to insulting, though I’d say we’re more ‘malignantly indifferent’ than outright mean,” he said.

“If North Korea actually calls Trump a rotting papaya, we (will) all know where they got it,” he said.