Fact or fiction: the pervasive legal myths that can mess up military lives 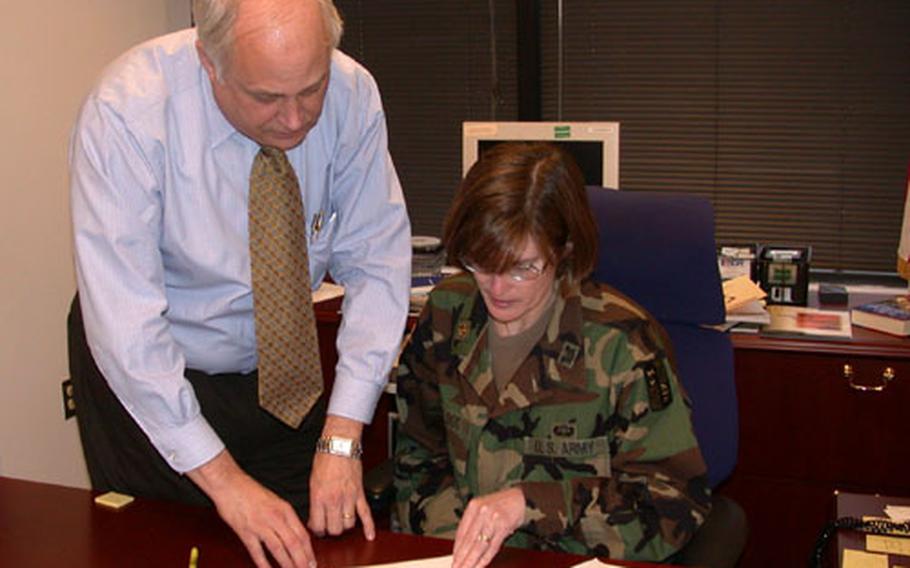 Meixell consults with a colleague, Maj. Cheryl Kellogg, another adviser in the Army’s Office of the Judge Advocate General in Rosslyn, Va. (Lisa Burgess / S&S)

Meixell consults with a colleague, Maj. Cheryl Kellogg, another adviser in the Army’s Office of the Judge Advocate General in Rosslyn, Va. (Lisa Burgess / S&S) 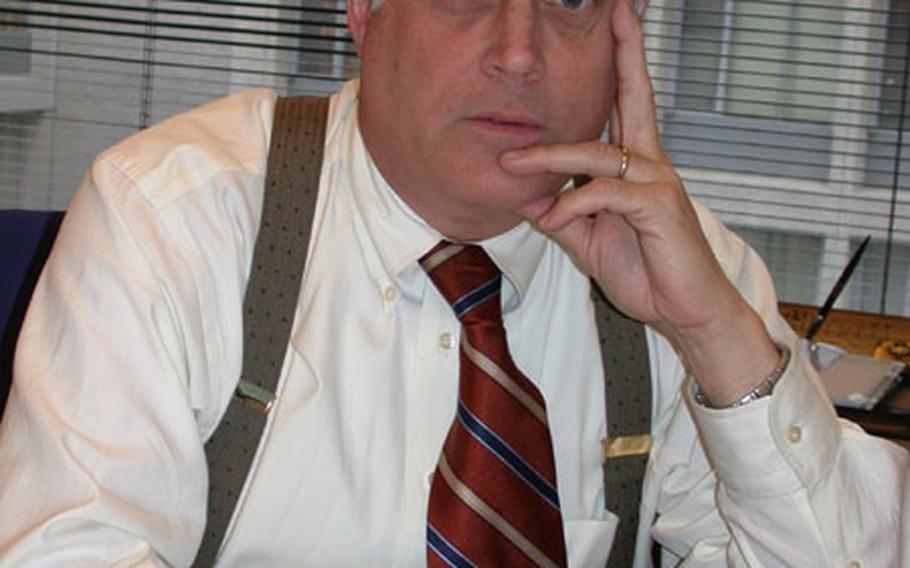 ARLINGTON, Va. &#8212; Whether it&#8217;s keeping up with credit-card payments or maintaining a valid driver&#8217;s license, legal responsibilities don&#8217;t go away when servicemembers are assigned overseas or deployed to a war zone.

Sorting out these matters can be a real headache, even with federal and state laws designed to ease the burdens for U.S. troops.

But headaches can become migraines when a servicemember falls victim to one of the legal myths that are pervasive among military units, according to John Meixell, an attorney with the Army&#8217;s Legal Assistance Policy Division.

In the course of providing oversight to approximately 200 Army lawyers who staff offices worldwide, Meixell and his officemates have repeatedly heard the same myths.

Many of the misconceptions involve the Servicemembers Civil Relief Act, a law designed to protect military members from certain legal obligations while they are actively engaged in national defense, Meixell said.

The SCRA has valuable provisions that reduce interest rates on debts incurred before active-duty status, protect servicemembers and their families from eviction, and delay civil court actions, among other things.

Unfortunately, many servicemembers misunderstand the extent to which they are protected under SCRA, Meixell said.

Here is information about some of the biggest legal myths Meixell said his office struggles to dispel. But it&#8217;s not legal advice. For that, see your legal assistance office.

Who is covered by SCRA

Myth: The SCRA applies only to reservists who are activated, or active-duty soldiers who are deployed.

Reality: The act applies to anyone on active duty, deployed or not.

Myth: The SCRA says that as soon as I deploy, the interest rate on all my loans has to drop to 6 percent, whether I&#8217;m a reservist or am active duty.

Reality: Only loans incurred before activation for reservists or pre-service for active-duty members are eligible for the lowered interest rate.

Meixell explains: &#8220;This [myth] frequently causes problems for active-duty soldiers,&#8221; Meixell said, who seem to think that as soon as they deploy, the interest rates on their car loans, credit cards, and every other debt must drop to 6 percent.

While the provision does apply to active-duty soldiers who get deployed, it applies only to loans they took out before they joined the military.

Myth: The 6 percent provision includes the interest on my government-sponsored student loans.

So even if you took the student loan out before you entered active-duty status, you still have to pay the original interest rate.

Myth: My eligible interest rates will drop automatically to 6 percent as soon as I&#8217;m called to active duty.

Reality: You must request the reduction from your lenders.

Meixell explains: Servicemembers should send a letter of notification to every loan holder stating that they have entered active-duty status, and requesting a reduction of their interest rate on the loan to 6 percent in accordance with the SCRA. Include a copy of your orders to active duty, whether those are initial entry orders for active-duty personnel, or activation orders for reservists, Meixell said.

Meixell explains: The 90-day automatic stay is one of the new provisions in the SCRA that went into effect December 2003. Additional stays are &#8220;discretionary&#8221; for the court. Judges will take into account the urgency of the issue at hand (child custody cases, for example, are often considered urgent), and how difficult it is, logistically speaking, for a member to get to court.

The good news: If an application for an extended stay is turned down, the amended SCRA says that the court must appoint a lawyer to represent the servicemember.

The bad news: The amended law is so new that no one has figured out who pays that lawyer &#8212; the servicemember, or the court.

Myth: When I head overseas, I can declare my official state of residence to be whichever I want. I&#8217;ll pick a state that doesn&#8217;t have income tax, like Texas or Florida.

&#8220;Intent&#8221; generally includes such actions as: registering a vehicle in that state, obtaining a driver&#8217;s license, registering to vote and renting an apartment or house. The best proof of all is purchasing a primary residence. Check the laws in your state for details.

The good news: If you&#8217;re deployed to a combat zone, your state of residence can&#8217;t tax your income anyway, any more than the federal government can.

The bad news: &#8220;For troops stationed in [places such as] Germany and Korea, you may very well be subject to state income tax&#8221; if your state of residence charges it, Meixell said.

Myth: The SCRA has provisions that give me a &#8220;grace period&#8221; on my driver&#8217;s license and vehicle registration, so when I come back from a deployment, I can drive on expired documents for a while.

And I also get a grace period if I&#8217;m returning to CONUS from overseas &#8212; I can drive on my USAREUR or PACAF tags until I get around to re-registering my vehicle.

Reality: No federal law, including the SCRA, has provisions that offer &#8220;grace periods&#8221; regarding vehicle registrations or driver&#8217;s licenses for servicemembers who are coming back to the United States from overseas.

Meixell explains: Each state is different. Servicemembers are required to comply with the law in the place where they are licensed or registered.

To find out what their local laws require, servicemembers should contact their legal assistance field office.

The good news: Some states have passed special laws to make life easier for returning military personnel. New York, for example, has a special provision that extends for six months &#8220;all licenses and registrations for military personnel returning from active duty relating to the war on terrorism and military action in Iraq.&#8221;

(For more information on the New York law, go to www.nydmv.state.ny.us/forms/ military.pdf).

The bad news: Not every law enforcement officer is up on the latest laws, so even if your jurisdiction allows extensions, &#8220;the problem [might be] convincing the state trooper on I-95 when he pulls you over,&#8221; Meixell said.

He suggested printing out the applicable statute and keeping a copy in your glove compartment or wallet (you might want to be extra-polite when you show your proof to that trooper).

Myth: My insurance rates should be based on the rates in the state where my vehicle is registered.

Reality: By law, your insurance rates are based on the state where your vehicle is garaged.

Myth: I&#8217;m a divorced parent with primary custody. In my required Family Care Plan, I specified that my parents would take care of my child when I&#8217;m deployed. My parents have my power of attorney. So there&#8217;s no way my ex- spouse can try to take custody of my child while I&#8217;m gone.

Reality: If the child&#8217;s other natural parent decides to sue for custody under these circumstances, the odds are in his or her favor.

Prevention: The first move is to talk to your ex before you deploy.

&#8220;Try to work out an arrangement with the former spouse and get written consent to your Family Care Plan &#8212; notarized, if possible,&#8221; Meixell said.

If there&#8217;s no way the two of you can come to an agreement, &#8220;you need to take pre-emptive action before deployment to get the courts to order a [different] custodial arrangement,&#8221; Meixell said.

But be warned. &#8220;This is going to be difficult,&#8221; he said, because again, courts tend to sympathize with the rights of the natural parent.

Myth: My ex and I get along really well. She has physical custody of our child, but we decided that it&#8217;s my turn. She agreed that I don&#8217;t need to pay child support as long as the kid&#8217;s with me. We worked it all out. There&#8217;s no need to bother going to court and get the custody agreement changed.

Reality: If you don&#8217;t actually amend the custody agreement, you still owe your former spouse any child support payments you originally agreed to, even though the child is with you.

It doesn&#8217;t matter that you can prove that you were caring for the child, not your spouse. He or she still can take you to court and force you to pay past-due support.

And even if your ex-spouse doesn&#8217;t request the money, if you pay child support through a state&#8217;s Child Support Enforcement office &#8212; as many people do &#8212; CSE officials can compel you to keep writing that monthly check anyway.