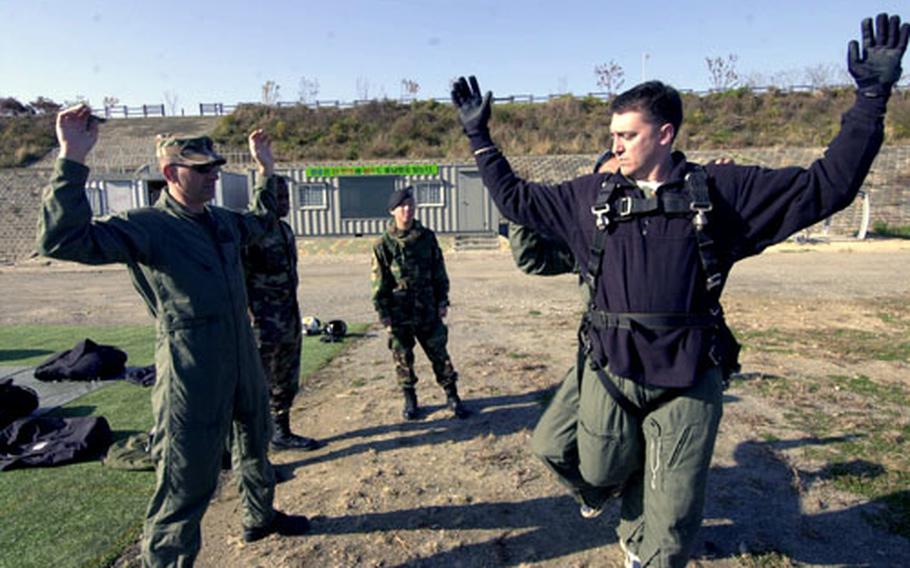 What are you afraid of? Spiders? The IRS? Speaking in public?

I&#8217;m afraid of heights. Terrified, actually. Which is why it seemed pretty strange on Wednesday to find myself on the back ramp of a CH-47 helicopter, gazing down 9,000 feet to the South Korean countryside sprawled below me.

Actually, I was doing my best not to look. I was more worried about whether the straps of my tandem skydiving rig were connected properly to South Korean Special Forces Sgt. Maj. Sung Chang-woo. A veteran of more than 5,000 jumps, Sung was going to assist with my first foray into the wonderful world of high-altitude, low-opening sky diving.

How did I get there? It was easy, actually. My fear of heights pales in comparison to my fear of &#8220;punking out.&#8221; It was my own fault. I told members of the 39th Special Forces Detachment that I wanted to write about some of their high-speed training. So when someone asked if I felt like jumping, and three or four soldiers turned to see what I would say, I blurted out the first thing that would come to the mind of anyone scared of heights: &#8220;Sure, sounds great.&#8221;

Fast-forward a few weeks: I&#8217;m close to hyperventilating, my breath visible in the freezing air, as Sung and I await the final green light from the Chinook&#8217;s jumpmaster. Before I&#8217;m ready, we get the signal. As rehearsed, we rock forward, backward, and forward once more before falling out of the helicopter with a half twist to the right.

It was like leaping into the loudest wind tunnel on Earth. The ground was a blur as we tumbled through the air, me trying in vain to relax my body and not fight the wind. It took us about 25 seconds to stabilize &#8212; with the sergeant major steering my arms and legs &#8212; and another few seconds to give a thumbs-up to the cameraman videotaping us. By that time, we had already fallen about 4,000 feet and I was given the signal to open the chute.

I guess someone should have stressed that I hold on to the ripcord after a light pull to deploy the parachute. But with adrenaline rushing through my body, I pulled it completely off and threw it aside. That, caught on film, made for a lot of laughter as my tape was reviewed.

The few minutes it took to parachute toward the drop zone were rewarding; the view was beautiful and I actually got to steer the parachute. We practiced the landing sequence a few times as we neared the zone and I was reminded to keep my legs up high when we hit the ground.

At 6 feet 4 inches, I was so much taller than Sung that we would jackknife into the dirt if I were to touch ground first. Once we landed and unhooked it was tough to even stand on my trembling legs.

The critique was pretty straightforward: Apparently I was as graceful as a sheet of plywood tumbling through the air.

Especially if there&#8217;s no real chance of it happening.