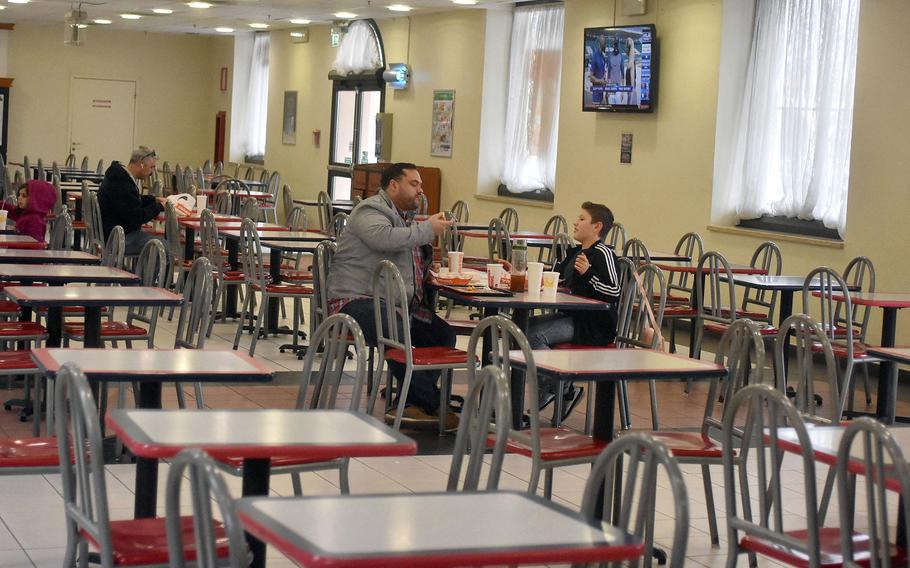 The food court at Aviano Air Base, Italy, March 6, 2020. The food court, along with both Deja Brew coffee shops, the golf course grill, the bowling alley grill, and Subway were closed after Italian Prime Minister Giuseppi Conte ordered everything except grocery stores, pharmacies, banks and post offices to close to try to stop the spread of coronavirus. (Kent Harris/Stars and Stripes)

AVIANO AIR BASE, Italy – The food court at the base exchange was a ghost town Thursday. No milk was being frothed for cappuccinos at Aviano’s coffee shops, and nothing was cooking at the golf course or bowling alley grill as U.S. bases followed Italy’s lead and further tightened restrictions in a bid to stop the spread of the coronavirus.

In Vicenza, 173rd Airborne Brigade soldiers were essentially restricted to base following the latest Italian government order that all retail businesses except grocery stores, pharmacies, banks and post offices were to shut down.

“There is no need to rush to buy food. The grocery stores remain open,” Italian Prime Minister Giuseppi Conte said in a message on Facebook. Public services, including transportation and utilities, would also remain open, Conte said.

Soldiers on Del Din were expected to shop for food at the shopette or eat in the dining facility. On Caserma Ederle, where the dining facility is closed, they could shop at the commissary or go to the food court and get take-out.

“We are limiting all our movement to essential movement. They can get their essential services here,” said Maj. Chris Bradley, a 173rd spokesman.

The brigade has some 3,800 paratroopers, although some are based in Germany.

“We are working through what that means to our uniformed and civilian personnel and their families. We will provide further guidance as soon as we can,” the message said.

Italy, which has the worst coronavirus outbreak outside of Asia, and the second highest death rate after China, has been listed for several weeks by the Centers for Disease Control and Prevention as a Level-3 country with widespread sustained transmission of the coronavirus. The CDC advises people to “avoid nonessential travel” to Level-3 countries.

There have been more than 15,000 confirmed cases of the coronavirus in Italy as of Thrsday, and more than 1,000 have died, according to the Associated Press. Only one American service member in Europe, a sailor in Naples, has tested positive for the virus. He was staying at home and anyone he has had close contact with is being monitored, officials said.

Nearly every other country in Europe was raised to Level 3 by the CDC overnight after President Donald Trump banned travelers from Europe from entering the United States.

At Aviano, food was available at the commissary, the Italian cafeteria, called Mensa, the dining facility and both shopettes, base officials said.

Physical training has been prohibited at Sigonella’s airfield site, although service members can work out on their own at the other two sites on base, public affairs officer Lt. Karl Schonberg said. The base’s schools and other facilities closed for the first time on Tuesday and will remain closed through at least Monday, Schonberg said.

American service members, their families and base personnel at Aviano have been asked to stay home, only going out for mission-essential work, emergencies or to buy necessities such as food.

Anyone who ventures out must carry with them official authorization forms from the military. Not having the document could lead to time in jail or a fine of more than $200.

Short walks are allowed, especially for people with pets. But even then, it is essential to carry the authorization documents, officials said.

Stars and Stripes reporters Nancy Montgomery and Kent Harris contributed to this report.