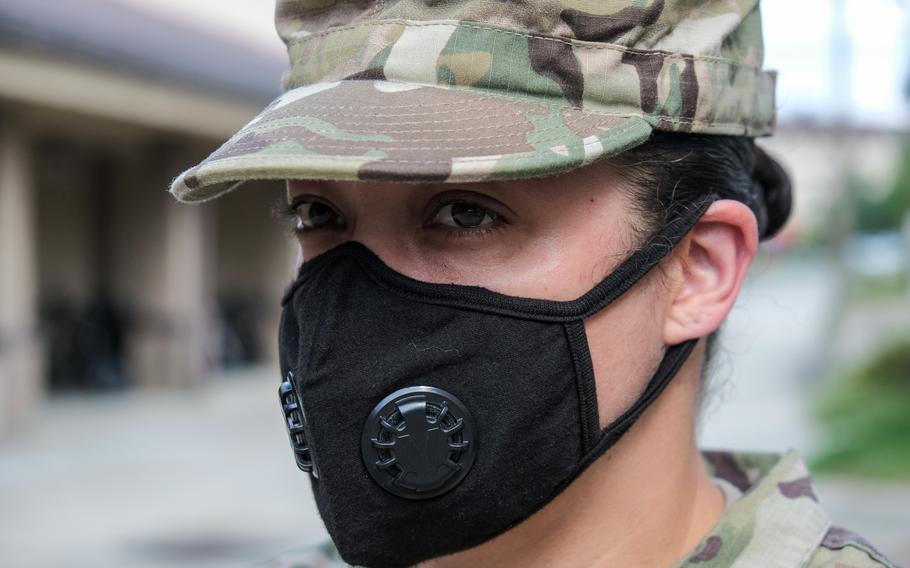 SEOUL, South Korea — The U.S. Army has banned masks with valves for soldiers and other personnel in South Korea, joining a growing consensus that the high-tech face coverings may do more harm than good in preventing the coronavirus’ spread.

The decision followed new guidance from the Centers for Disease Control and Prevention, which said last month that such masks “allow air to be exhaled through a hole in the material, which can result in expelled respiratory droplets that can reach others.”

U.S. Forces Korea made it mandatory for people to wear masks when in public off-base in accordance with rules set by local communities after another coronavirus outbreak began last month.

On base, people must wear them inside stores and other crowded facilities, or anytime it’s not possible to maintain a safe distance from other people, USFK said.

However, the Eighth Army announced last Tuesday that masks with valves were no longer authorized.

“Neck gaiters and other cloth items, such as bandannas and scarves, are authorized as face masks along with masks without valves,” it said in a post distributed on social media.

“Face coverings or masks must cover both the mouth and nose and extend to the chin or below as well as to the sides of the face. Stop the spread!” it added.

Many commenters expressed frustration about the decision, noting that the high-tech masks had previously been recommended as most effective against pollution.

Some also asked if refunds would be provided since the Vogmasks sold at the post exchanges cost about $30.

Victoria Stanton, an Army spouse based at Camp Humphreys, said her primary care manager recommended a valved mask as the best option to avoid exacerbating her eczema.

“I have one that has a filter between my face and the valve, which essentially makes it the same as a non-valved mask because what I’m breathing out is filtered before going out from the valve,” Stanton said.

The adviser “said the a valved mask with a disposable filter would help out with pollution and if I was sick,” she added. “It was also more cost effective and better for the environment.”

The Eighth Army said the ban applies to all personnel including troops, civilians, contractors and their family members.

“The U.S. CDC and Army Public Health Command state the exhalation valves allow unfiltered exhaled air and droplets to escape the mask that may contain viruses,” the public affairs office said in response to questions from Stars and Stripes.

Eighth Army said all unit and base facilities that require face coverings may restrict entry to those wearing masks with valves.

The post exchange, which still had valve masks on display at Camp Humphreys this week, said its standard return policy applies.

“Shoppers who have purchased a VOG mask with valves may return their unused mask in its original packaging for a full refund,” said Army Staff Sgt. Mark Kauffman of the regional Army and Air Force Exchange’s public affairs office.

The Air Force has begun encouraging people not to wear them based on the CDC recommendations but hasn’t issued a ban, according to the 51st Fighter Wing.

Face masks have long been a controversial topic for the U.S. military in South Korea, where people commonly wore them even before the pandemic as protection against high levels of pollution.

USFK previously banned soldiers from wearing masks while in uniform but reversed that last year to allow face coverings under certain conditions following complaints that more protection was needed against poor air quality in South Korea.

As the coronavirus took hold earlier this year, the policy evolved to encourage face masks as one of the simplest and most effective ways to save lives.

Masks with valves, a common site among construction workers, may be more comfortable and make it easier to breathe.

However, recent studies have found that they are less effective at preventing the spread of the coronavirus because they put people near the wearer at risk.

“Masks with exhalation ports include a one-way valve, which restricts airflow when breathing in, but allows free outflow of air,” the article said. “The inhaled air gets filtered through the mask material; however, the exhaled breath passes through the valve unfiltered.”