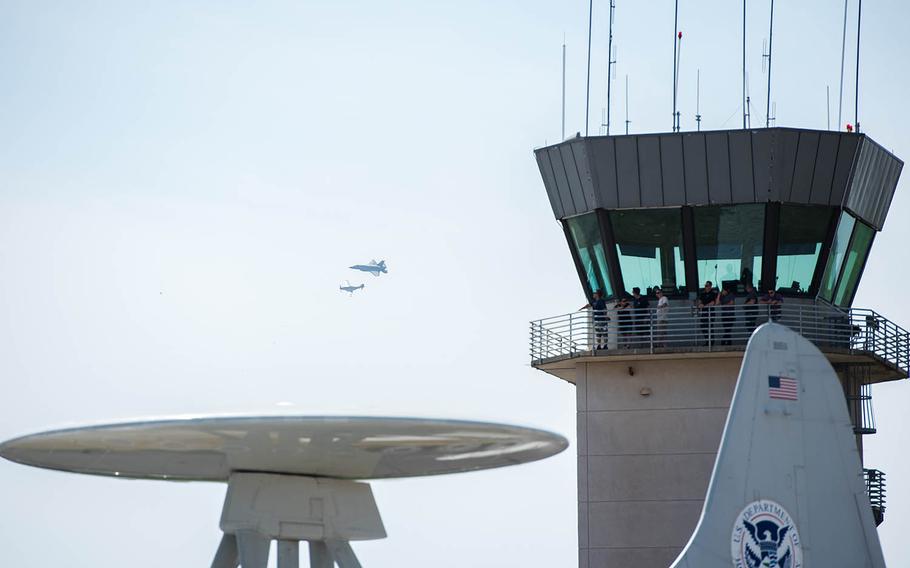 An F-35A Lightning II and P-51 Mustang fly in formation at Naval Air Station Kingsville, Texas, March 25, 2018. The base is one of four across the U.S. where new restrictions banning nearby drone flights will begin June 1. (56th Fighter Wing Public Affairs)

The Federal Aviation Administration has established no-go areas for drone flights over four military bases, apparently in response to a steady rise in sightings by pilots of the unmanned aircraft.

The restrictions extend up to 400 feet from the boundaries of the four bases, the FAA said. Operators who violate the airspace restrictions may be subject to enforcement action, including potential civil penalties and criminal charges.

There have been multiple reports in recent years of near-misses or even midair collisions between drones and passenger aircraft. Most of the incidents involving commercial airliners have occurred at low level, during the departure and approach phases of flight.

The International Air Transport Association has warned that drones flown by the general public are now “a real and growing threat” to civilian aircraft.

A bipartisan group of U.S. senators has introduced legislation to expand the federal government’s powers to act against drones deemed threatening to the public. The legislation would give law enforcement departments authority to seize or destroy drones in such situations.

The introduction of the bill on May 14 follows a request from the Trump administration to loosen legal prohibitions on intercepting aircraft.