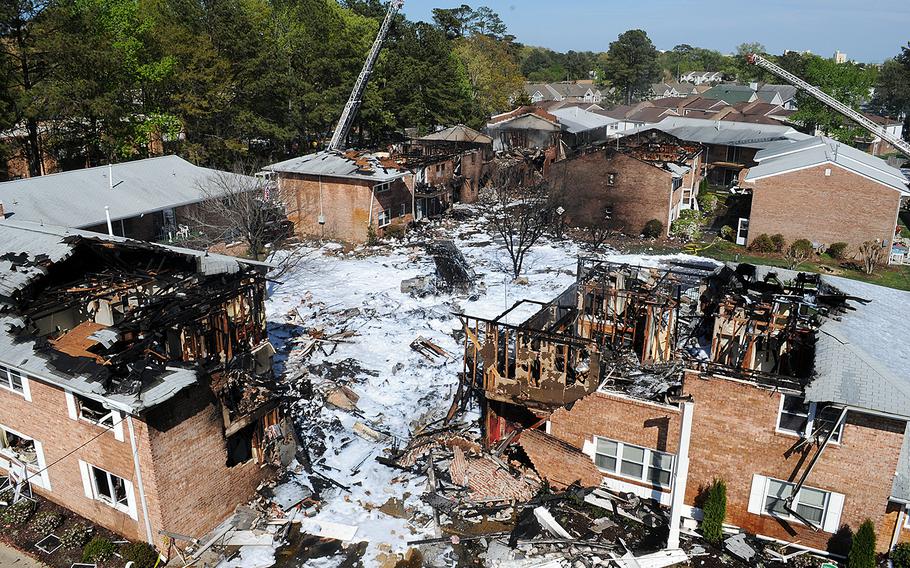 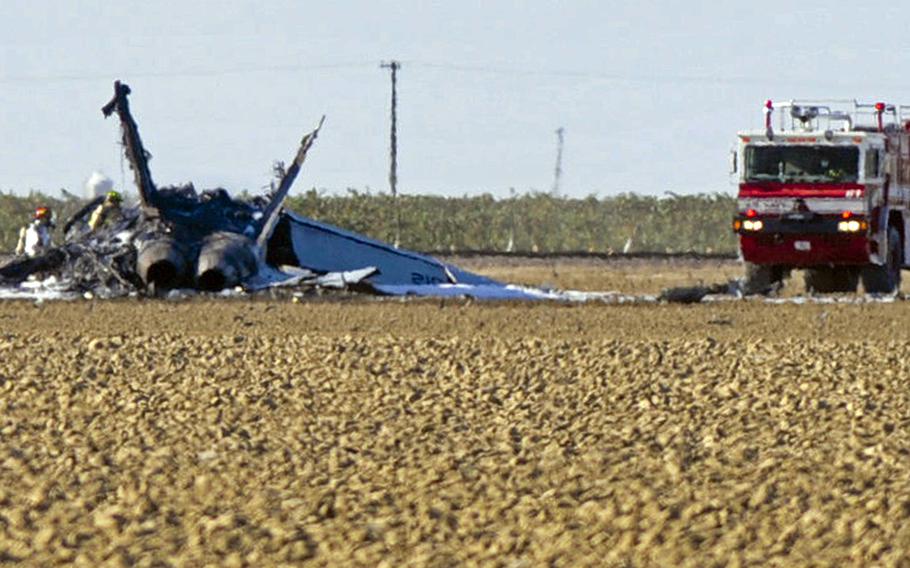 Firefighters stand by wreckage from a fighter jet where it crashed in a field near Lemoore Naval Air Station in California, Monday, Sept. 21, 2015. The pilot ejected and safely parachuted to the ground. (Apolinar Fonseca/The Hanford Sentinel) 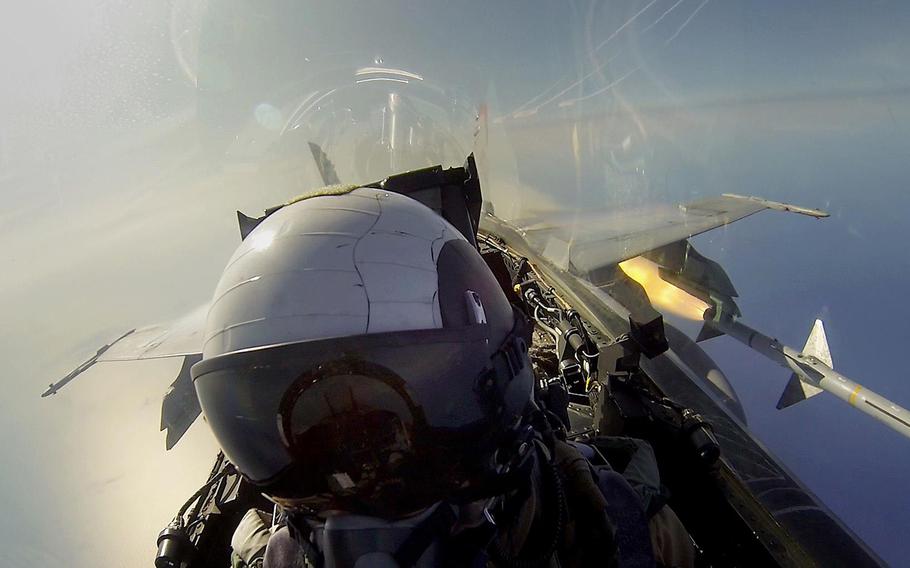 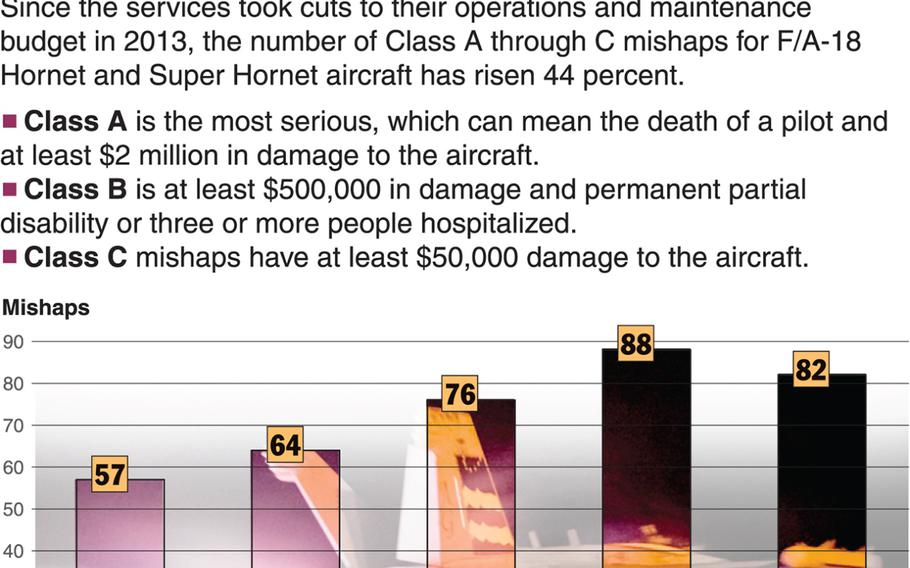 WASHINGTON — A year ago, Navy and Marine Corps leaders gave a dire warning to Congress: Budget cuts have hurt nondeployed units and could cost lives during a major conflict.

The losses happened, but not in combat. Pilots died training at home.

The crashes are the latest in a sharp increase in military aviation accidents overall for nondeployed squadrons, which have absorbed the bulk of budget cuts through reduced training and delayed maintenance at home so the best aircraft and personnel can be used on the front lines.

In 2011, Congress passed the Budget Control Act that instituted automatic federal spending cuts known as sequestration. By March 2013, the across-the-board cut to all spending programs started to take effect.

The Defense Department’s operations and maintenance account, which pays for flight training and repairs on aircraft, lost $20.3 billion that year, according to the Government Accountability Office.

Since 2012, the number of major Navy and Marine Hornet and Super Hornet accidents — incidents causing at least $50,000 in damage and in some cases leading to injury, death or the loss of the $60 million aircraft — skyrocketed 44 percent, according to data collected by the Naval Safety Center in Norfolk, Va.

“It’s extremely clear what’s happened,” said California-based Navy F/A-18E/F Super Hornet pilot Lt. “Versace,” who asked to be identified by his call sign only because he was not authorized to speak on the issue. “These aircraft have reached their life span and they continue to extend their life spans for another few thousand flight hours, which hasn’t worked for them due to significant budget decreases. Yet they continue to run these jets that have caused catastrophic incidents.”

After the most recent F/A-18 Hornet crash Aug. 2 at Fallon Naval Air Station in Nevada, some experts who watch military readiness said Navy and Marine aviation is in trouble.

“I believe naval aviation is at risk of eventual systemic failure,” said retired Navy Cmdr. Chris Harmer, now a senior naval analyst with the Institute for the Study of War, a nonprofit, nonpartisan think tank in Washington. “Either funding needs to be significantly increased in order to restore airframe availability and pilot proficiency and support current operations, or operational tempo needs to be drastically reduced.”

The Navy and Marines rank their aviation accidents as mishaps, with the top three most damaging as Class A through C. Class A is the highest level of crash and means a pilot was killed or permanently disabled or the aircraft sustained at least $2 million in damage.

Since sequestration, the number of Class A through C mishaps involving Hornets or Super Hornets has climbed from 57 in fiscal year 2012 to 82 as of Aug. 2 of this fiscal year, according to data from the Naval Safety Center.

But attention has focused on the Hornets after a recent string of crashes.

On Aug. 2, a Navy pilot safely ejected after the F/A-18C he was flying experienced an engine fire at Nevada’s Naval Air Station Fallon. Flights are required to test aircraft after having certain engine or cockpit repairs or if the plane hasn’t been flown in 30 days, according to the Navy.

Marine pilot Maj. Richard Norton was killed July 28 when the F/A-18C he was flying crashed near Twentynine Palms in California during a nighttime training mission.

A crash in June of another F/A-18C during a Blue Angels practice flight killed Marine Capt. Jeff Kuss.

Two Super Hornet F/A-18/F aircraft collided in May during a training mission off the coast of North Carolina. The four crewmembers ejected and were rescued.

The role of flight hours

Lt. Gen. Jon Davis, deputy commandant for Marine Corps aviation, told lawmakers in July that the spike in Class A mishaps involving the Hornet looked worse than it is because the service was flying fewer hours.

“It’s actually kind of on par where it has been in the past,” he said. But with a smaller number of flight hours, “every mishap makes this bump up a lot.”

However, the Marines and Navy have seen their overall number of flight hours – deployed and home training – stay relatively the same during the past few years, according to data from the Naval Safety Center.

Combat demands on aircraft remain high and are the priority, the Navy and Marine Corps said. Since Operation Inherent Resolve began in late 2014, aircraft from the Navy’s carrier strike groups have taken on an increasing amount of the combat load. When the aircraft carrier USS Theodore Roosevelt ended its deployment to the Middle East in late 2015, it had set a record for the number of bombs it had dropped against the Islamic State group. When the USS Harry S. Truman took its place, the Truman set new records again, not only in bombs dropped but in total flight hours.

That means even fewer hours available at home.

Manazir told committee members that the minimum number of hours a Navy pilot can fly each month to stay safe is 11.

“We call that the tactical hard deck,” he said. “Studies have been done by the safety center that say, ‘If pilots fly less than 11 on a regular basis, there is a chance that mishaps will go higher.’”

Versace said he’s noticed the difference in the amount of time that he gets to fly.

“A lot has changed since I first started flying with the Navy,” he said. “Budgets are taking a significant toll on many military personnel. Many aviators have had their hours decreased. Personally, since flying the F/A-18E/F for 41/2 years, my flight hours have annually decreased by 15 percent.”

The Marines saw its low point for F/A-18 Hornet flight hours last summer, when it averaged 8.8 hours per month per pilot for nondeployed squadrons, Davis said. Increased funding and an emphasis to improve readiness has upped that average to 11.1 as of August 2016, said Capt. Sarah Burns, a spokeswoman for the Marines.

Naval Air Forces Vice Adm. Mike Shoemaker said at a recent defense forum that the average flight hours for the Navy for the nondeployed squadrons is 12 to 14 hours a month.

“That’s the average, there some who are down in the probably single digits and there are some who are flying above that … squadron [commanding officers] are managing that,” he said.

What it means for pilots

An average flight is about 1.2 to 1.4 hours, said retired Col. John Venable, who piloted F-16s for the Air Force for two decades and is now a senior defense fellow at the Heritage Foundation, a conservative Washington think tank.

Eleven hours means each pilot is only flying about twice a week. Venable said getting enough hours is key to being ready to fly.

“Flying is very volatile,” he said. “Your ability to not have to think about the task at hand was all related to how often you flew.”

A lack of flying time does add to the rise in accidents, said Seth Cropsey, a former Navy officer who served as the deputy undersecretary of the Navy in the Ronald Reagan and George H.W. Bush administrations.

“When you send pilots up there who haven’t had time in the planes – [that is] what you get,” he said. “Something has to give.”

Reduced funding at a time when the Navy and Marine aircraft are required for many missions has dropped the number of aircraft available to pilots, members of Congress and the military have said.

“Intense budgetary pressures and years of high levels of ongoing operations have created a situation where the Navy and Marine Corps do not have enough ready basic aircraft for our aviators to fly,” Sen. Roger Wicker, R-Miss., said at a Senate hearing in April.

Increased use of aircraft has required more repairs on them or aged them to the point of no longer being useful, the Navy and members of Congress said. The budget cuts in 2013 forced layoffs at depots where the work was being done, Naval Air Forces Cmdr. Jeannie Groeneveld said. The rate of repairs has still not recovered.

In April, Davis said those pressures have specifically affected the Hornets and the pilots who fly them. He cited a report showing that of the Marines’ 276 Hornets, only 87 were available for missions.

“Out of those 87 airplanes, I put 30 airplanes in the training squadron and 40 airplanes for deployment. There’s not [enough] left for the units to train with during the day,” he said.

Of the Navy’s 259 Hornets, 55 were mission-capable, or able to perform “at least one and potentially all of its missions” as of July 28, Groeneveld said.

Working on a fix

The Navy planned to stop buying Super Hornets in anticipation of the arrival of the F-35C, its version of the new Joint Strike Fighter.

As the F-35 program faced delays and setbacks, it was unable to relieve pressure from the F/A-18. It is expected to reach initial operational capability in mid-2018.

As a result, the older Hornets are reaching the end of their service life faster, and newer Super Hornets are aging more quickly than the Navy planned.

To address that, the Navy is pushing the aircraft to last 8,000 hours of flight time, Groeneveld said. In some cases, the planes are being overhauled to squeeze 10,000 hours out of them, she said.

“The F/A-18 Hornet was originally designed for a 6,000-hour service life,” Groeneveld said.

The Navy is considering buying extra Super Hornets to fill any gap between the time that the current jets wear out and the F-35 is finally ready. In May, USNI News reported that the Navy was seeking $1.5 billion to buy 14 extra Super Hornets to ease some of the strain on the current fleet. The extra aircraft are meant to serve as a bridge until the Navy’s version of the F-35 is ready. The aircraft, the F-35C, is finishing its final flight tests aboard the aircraft carrier USS George Washington this month, and the Navy is expected to declare initial operational capability for it next year. The Marine Corps and Air Force have declared their versions initial operational capable, but neither has been used in combat roles.

Without ready replacements, there is not another option, Groeneveld said.

“Despite its age and high-utilization rates, we continue to depend on the Hornet to be combat-ready,” she said. “We have an extensive ongoing effort to monitor, assess and repair, to safely extend some of our Hornet aircraft to a 10,000-hour service life,” she said.

But a fix won’t be quick, as the Navy and Marines deal with the limitations caused by funding cuts.

“It will take time to recover from the significant challenges we have faced in recent years,” she said.