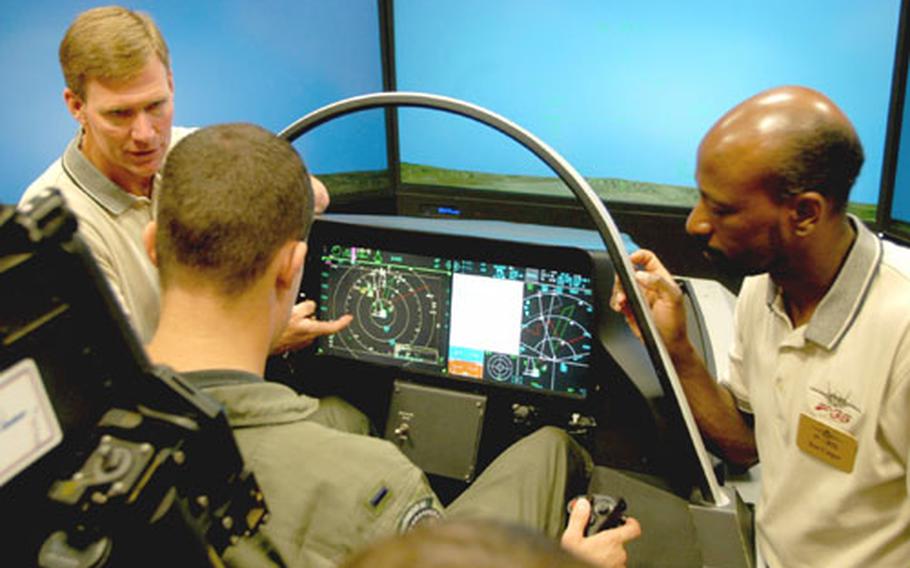 Mike Barton, left, a pilot systems engineer for Lockheed Martin, points out a feature on the console of an F-35 simulator at Aviano Air Base to 1st Lt. Matt Kuperus, while simulations systems specialist Kenn Cooper looks on. F-16 pilots and crewmembers got to climb into the cockpit to get a glimpse of the future jet. (Kent Harris / S&S)

AVIANO AIR BASE, Italy &#8212; The U.S. military is looking at the F-35 Joint Strike Fighter as the next generation of fighter aircraft.

Or maybe it&#8217;s Next Generation. Because with technology resembling something from a Star Trek series, the F-35 appears to be light years away from the jets it&#8217;s supposed to replacing.

The Joint Strike Fighter is slated to eventually replace the F-16 Fighting Falcon, A-10 Thunderbolt, F/A-18 Hornet and AV-8B Harrier that are now being used by U.S. pilots. In theory, it would team with the F-22 to give the U.S. and its allies an even greater tactical edge in the air.

Barton and other Lockheed Martin reps are taking the simulator on a tour of NATO countries during its short swing in Europe. The simulator will be in Stuttgart next week, followed by stops in Copenhagen, Denmark, and Oslo, Norway. Denmark and Norway are two of the other eight countries that are partners with the U.S. in the development of the F-35.

Airmen at Aviano appeared to be impressed Tuesday.

Billy Diehl, another former fighter pilot who works in business development for Lockheed Martin, said the first F-35s likely wouldn&#8217;t be deployed to bases such as Aviano until at least 2013. And that&#8217;s if Congress decides to approve the funding for the aircraft, which won&#8217;t be found in a discount bin at the base exchange.

The model that could eventually make its way to Aviano is the F-35A. It&#8217;s the smallest of the three under development and will come with a price tag of at least $46 million. It will likely be the most common as well, with interest shown by almost all the partners.

The F-35B, with short and vertical takeoff and landing abilities, has attracted interest from the United Kingdom, U.S. Marine Corps and Italy. It&#8217;s pricier at more than $63 million.

The $65 million F-35C is geared toward use on aircraft carriers, with the Navy set to be a big customer.